LEXI’s IoT technology is capable of unifying a fractionalized market made up of dozens of brands. And its potential seems limitless.

I was wrong about the internet of things (IoT).

I began touting the coming revolution in smart devices about eight years ago. I said it would completely change how we live, work, and play.

To be fair, the IoT revolution has entered our home through products like Ring, Nest, and Alexa. And some companies, like GE, deploy hundreds of tracking sensors on their products.

We’ve come a long way in just eight years. Adoption has steadily increased over the years. But there’s still room for so much more.

I (and a lot of other people) completely underestimated how difficult it would be to develop an IoT ecosystem where various technologies and the products that flowed from them would be compatible with each other.

Would you tolerate being forced to buy all your new kitchen appliances from just one brand even though, say, the company that makes your coffee maker doesn’t make a very good refrigerator?

Of course not. But that’s exactly what’s happened. Consumers have to commit to a single ecosystem: Google’s Home, Amazon’s Alexa, or Apple’s Homekit. This walled garden extends to product choices as well, such as Philips Hue, Ring, Nest, and others.

“Once they choose,” says LEXI co-founder Scott Cahill, “there is a sense of being locked in. They don’t want to forgo their investment into their existing smart home purchases. And I don’t blame them.”

And so, consumers pay the price. Those who dare buy smart devices from more than one brand are stuck with devices that can’t work together. And those who have committed to a single brand have a limited range of products to choose from. 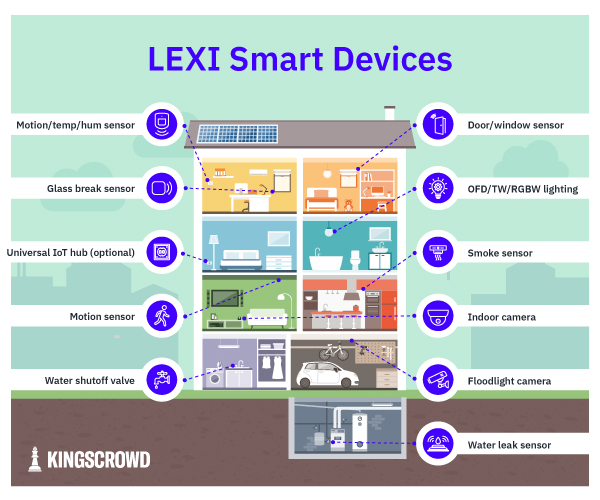 It works with all five primary IoT wireless protocols. (Wireless protocols, such as Wi-Fi, are simply the modes of communication that transport and secure the data being exchanged between connected devices.) Those five protocols — Bluetooth, Zigbee, LoRa, Z-Wave, and Wi-Fi — drive 98% of the market.

Only LEXI offers a product capable of unifying this fractionalized ecosystem made up of dozens of brands that dot the market much like islands in a vast ocean, unable and unwilling to communicate with each other. It’s unifying the various technologies across retailers, brands specializing in security, HVAC firms, utilities, telecoms, commercial buildings, home builders (the list goes on)…

LEXI is not only bringing a solution to the underwhelming world of IoT. It’s bringing the solution.

LEXI not only works with all five existing major protocols, it also works with the newer protocols like Matter and its companion technology, Thread. Matter allows smart home accessories to work across all the major smart home platforms. Consumers won’t need to know if a device is supported by Google Assistant, Amazon Alexa, or others. All they need to know is if it says “Matter.”

Thanks to LEXI (along with the newer protocols), consumers can now buy a broad range of smart products for their home. And device makers gain access to a much bigger customer universe now that they don’t have to worry about obtaining support from individual platforms.

Pay Annually and save 17%

Charts and trends of capital raised by platform, security type, industry, and more.