Serial entrepreneurship – where individuals found multiple companies – has long been viewed as an indicator of success. Although some venture capitalists (VCs) prefer to invest in entrepreneurs who are first founders, there is a lot of evidence and research suggesting that serial entrepreneurs raise more capital from VCs at large. But online startup investing has challenged the traditional VC model. With founders now able to reach a much wider audience of investors, has crowdfunding changed the likelihood of success for first-time founders?

In this Chart of the Week, we consider whether serial founders have an advantage in raising capital via equity crowdfunding. We examined all Regulation Crowdfunding (Reg CF) raises from January 2021 through November 2021 and compared the amount of capital raised by serial founders vs first time founders. Across more than 580 raises, 63.5% of founders had no prior experience with starting a company. Just under 215 founders were serial entrepreneurs – 36.5% in total. 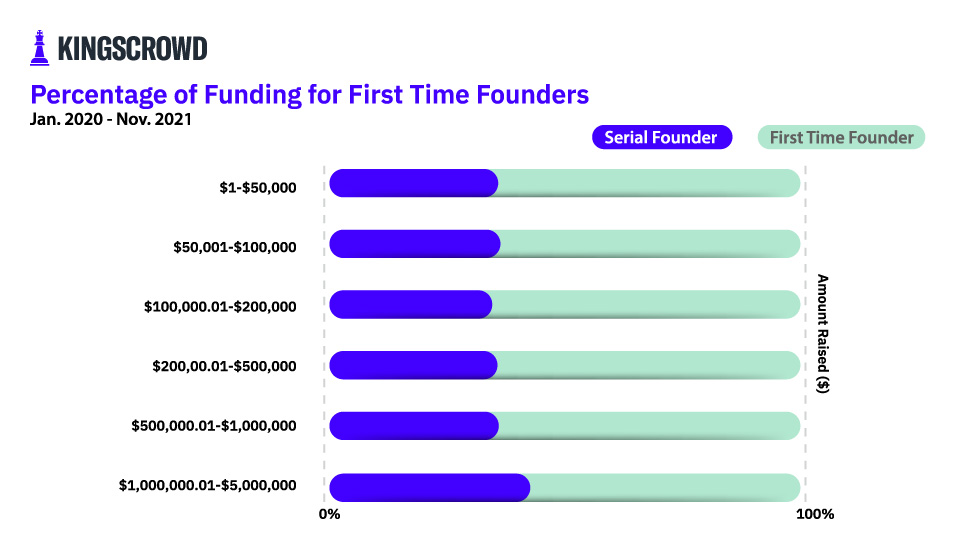 Interestingly, those percentages hold true for almost all amounts of capital raised. There is no significant difference between serial and first-time founders who raised less than $1 million. Online investors seem to have funded those entrepreneurs in equal proportions. However, representation of serial founders slightly increased for funding rounds that raised $1 million or more. Instead of the 65/35 split seen for rounds of less than $1 million, first time founders made up just 57.6% of rounds above $1 million – putting serial founders at 42.4%. While first time founders were still more than half of total founder representation, that 10% change could indicate that serial founders still have an advantage when raising larger amounts of capital.

Serial founders are often seen as having advantages like larger networks, better social skills, and past experience. These are the factors that many VCs look for when investing in companies. However, it appears that online investors may be looking for some different traits when assessing founders. Perhaps they care more about market potential, product type, and the entire team more than the individual founders.

And although serial founders might have skills first time founders don’t, there is something more important that investors should look for. When it comes to startup success, it is far more important to see that serial founders have had successful exits rather than just the fact that they’ve started multiple companies. Founders who have prior exits are more likely to succeed compared to first time entrepreneurs or those whose ventures previously failed.

Overall, there does not appear to be a strong correlation between the amount of capital raised by serial founders or first time founders through Reg CF. This trend is encouraging for novice founders as well as for minority and women founders who may have been unable to get their startups off the ground in the past due to VC biases.

The latest 22 equity crowdfunding campaigns from across 20+ online… ...

The latest online startup investment campaigns from across 40+ platforms. ...