Are the Size of Reg CF Rounds Changing? The answer appears to be Yes! - KingsCrowd Skip to content

Are the Size of Reg CF Rounds Changing? The answer appears to be Yes!

John Aland is a Contributing Editor for Crowditz.

There is a line from the Eighties classic, Spaceballs, that goes, and I am paraphrasing a little here, “We’re not just doing this for the money! We’re doing this for a *boatload* of money!” This quote came to mind when I started thinking about how firms approach their crowdfunding campaigns and how much they look to raise from an offering. Regulation CF set a cap on the amount that a firm can raise in a year ($1,070,000 – which, to keep the analogy going, would be a boatload), but is the average firm in it for a boatload of money, or merely just the money, when it comes to crowdfunding?

Some immediate interesting items appear when you look at the data. In the first year and a half of crowdfunding under Regulation CF, eight firms filed offerings with target amounts of $500,000 or greater, with two firms trying to raise over $1 million. In the past year, that number of firms with targets of $500,000 or greater fell by one, to seven, but no firms had a target amount greater than $500,000. So at least marginally, firms have adjusted their gaze downward when it comes to maxing out their target offering amounts.

On the other end of the spectrum, I looked at firms with an offering target of $10,000 or less. During the first year and a half (March 2016 – November 2017), 23% of firms had an offer target of $10,000 or less. In the past year, that number has climbed to just under 50%. This might suggest that firms are not necessarily getting involved in crowdfunding to raise a boatload of money, as the character Lone Starr so eloquently put it, but to raise specific amounts with a goal for its use in mind.

Now that I have covered the extreme ends of the spectrum, let us look at the population as a whole. Using data on offerings from the last 14 months, I looked at the average minimum offering amount by month to see if there was any discernable trend in what firms were looking for from the crowdfunding market. The plot below tells a story consistent with what we are seeing at the extremes…that firms are setting lower offering targets for their campaigns. Additionally, the average offering target from the last 13 months is $62,000, compared to an average of $82,000 over the first year and a half of Reg CF. 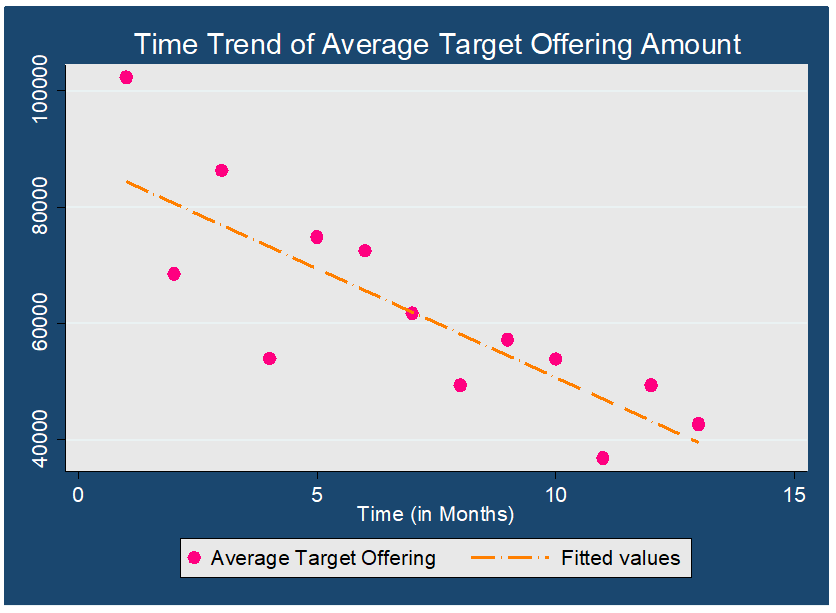 You may be thinking, “So what, firms are asking for less money through equity crowdfunding…and?” It is a fair question, and one that without data on the outcome of the more recent issuances we cannot answer fully, so instead I will offer a few thoughts:

1. Over time, firms developed a belief that lower target offering amounts lead to higher rates of success. This belief is born out slightly in the data. During that first year and a half, firms were hitting their targets at a little over 56%. From October 2017 to July of 2018, (I have excluded offerings from August through October 2018 to allow for the fact that these offerings have not necessarily concluded), the average success rate has climbed to 62%.

2. By setting low initial targets, firms avoid having to adjust their offering amount or their deadline through filing a Form C/A, which could be viewed by investors as a negative signal. Again, comparing the first year and a half of offerings to the last 13 months, the use of Form C/A to extend the offering or modify the target has decreased from 40% to 27%, with almost all the recent changes coming in the form of offering deadline extensions.

3. Firms may view the use of a Reg CF offering as another form of advertising or “customer involvement”. Utilizing low target amounts allows firms to fund a very specific aspect of their company while getting word out about their company and allowing their investors to feel like they are part of the firm.

4. Worrying about target amounts is much ado about nothing, as the average amount raised by firms during my two windows differs by about $6,000 ($135K vs. $129K). This tells us that even though firms are asking for less money, they are still raising about the same, on average, so the lower target does not necessarily keep people from investing over and above that amount.

I’ll close with another slightly modified quote from Spaceballs for those firms worried about where or how to set their minimum target, who may be worried they are leaving money on the table by not asking for more – “Don’t worry about it! We’ll meet again in *Crowdfunding Offering* 2: The Quest for More Money.”