Average Company Valuation by Platform in 2020 - Chart of the Week - KingsCrowd Skip to content
Become an owner of KingsCrowd.
Invest Today!

Average Company Valuation by Platform in 2020 – Chart of the Week

Valuations are an important part of assessing investment opportunities in the startup ecosystem. It’s meant to represent the company’s current or future worth.  A company’s valuation can take into consideration its management, the structure of its capital table, its current financial traction, and more. And with startups in the online private markets, the funding platform they are raising on can even influence the valuation. To that end, today’s Chart of the Week examines the average valuation of companies by platform in 2020.  (Note: for brevity’s sake, we only included the top 10 amounts.) 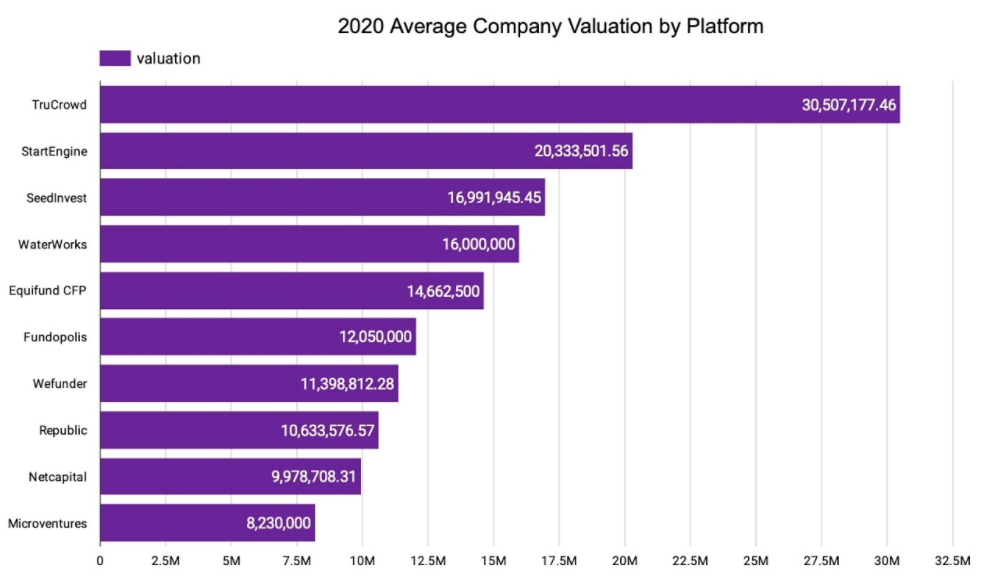 The most popular and frequently used platforms are Wefunder, StartEngine, Republic, SeedInvest, and Netcapital. Surprisingly, however, TruCrowd is the platform that has the highest average company valuation at $30.5 million. A little digging into the data reveals that TruCrowd hosted 13 companies with valuations higher than $25 million, including StartEngine ($190 million) and Med-X ($88.5 million). These high valuations obviously skew the data while also coming from a rather small sample.

StartEngine is a better example of standard performance in terms of company valuations, though it is still on the high side. In 2020, it saw more than 100 raises with the average valuation for the year coming out to $20 million. Of those 100 startups, more than 20 of them had valuations greater than or equal to $25 million.

At the other end of the spectrum is MicroVentures and the 38 companies it helped fund in 2020. In total, the average valuation was just over $8 million. Given that 38 is a healthy sample size, it seems MicroVentures is a good place to find lower valuations. Lower valuations may imply companies earlier in their lifecycles — so the lower valuations may also come with increased risk. It could also indicate companies whose products/services are cheaper to produce or who have smaller market niches. MicroVentures has only two outliers — Jetoptera ($24 million) and Blendid ($50 million) — both of which are hardware startups and thus lend themselves to high valuations.

How Safe are SAFEs?

SAFE refers to a “Simple Agreement for Future Equity.” Under… ...

All the latest equity crowdfunding campaigns from 20+ online platforms. ...