How Much Is Defensibility Worth? - KingsCrowd Skip to content
Become an owner of KingsCrowd.
Invest Today!

How Much Is Defensibility Worth?

Defensibility can come in a variety of forms. Patents, for example, protect certain intellectual or physical property rights. Other forms of defensibility include existing in a market with high barriers to entry — perhaps accompanied by legal or regulatory hurdles — or requiring massive amounts of data.

This week we looked at the defensibility subscore for companies rated by our Merlin algorithm. To get more nuanced data, we limited this sample to software companies. (We’ll explore this concept with various other product types in future charts of the week.) This data is reflective of all confirmed closed Regulation Crowdfunding (Reg CF) equity raises tracked by KingsCrowd. As with the overall Merlin company scores, defensibility subscores range from 1.0 to 5.0 in increments of 0.1. As a proxy for success rate, we looked at the amount of funding companies in each category acquired at the close of the raise. 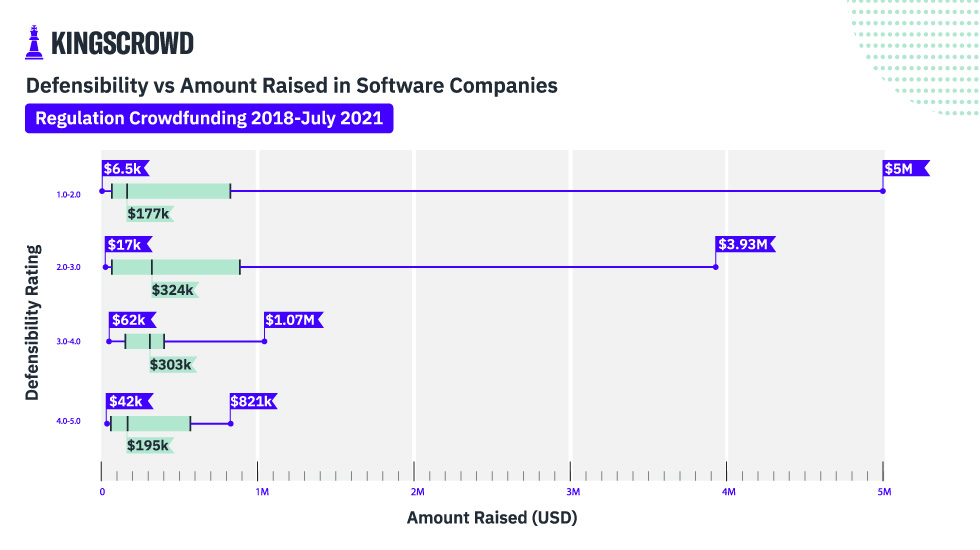 Historically, for Reg CF software companies, defensibility scoring at large did not seem to correlate with the amount a company raised. In fact, the only companies hitting the $5 million mark were bucketed in the 1.0 to 2.0 defensibility score group. It should be noted, however, that this was the largest group with 68 total raises. One company in the 2.0 to 3.0 bucket raised nearly $4 million. But companies that received defensibility scores of 4.0 and higher only raised a maximum of $821,000. Overall spread also ranged, with companies in the 3.0 to 4.0 category having some of the lowest deviation from the mean in terms of defensibility.

So do crowdfunders care less about defensibility than traditional venture investors? Perhaps, but there are other factors at play — including the large number of companies in the 1.0 to 2.0 bucket as well as the software-only focus.

Gumroad and Wefunder are just two examples of companies that raised $5 million but scored low on defensibility. Both were undoubtedly carried by their performance scores, resulting in overall scores above 5.0 and 4.8, respectively. This could indicate that, when it comes to the online private markets, crowdfunders weigh software companies’ performance metrics more heavily than their defensibility metrics. Stay tuned as we dive into the other product types in the following weeks.

The Impact of a Regulation Update

We examine the impact of the increased raise limit for… ...

This Chart of the Week breaks down investment minimums across… ...