The Impact of a Regulation Update - KingsCrowd Skip to content
Become an owner of KingsCrowd.
Invest Today!

The Impact of a Regulation Update

In late 2020, the SEC announced that the maximum raise limit for Regulation Crowdfunding raises would increase from $1.07 million to $5 million. This update represented a massive shift forward in the online private markets and allowed for companies to raise even more from everyday investors. It went into effect on March 15, 2021. But just how popular has this increased raise limit been?

This week we broke down the percentage of companies that took advantage of this increased limit month by month. The data is representative of all Regulation Crowdfunding equity deals covered by KingsCrowd. Of note, the data for March begins halfway through the month, on the 15th when the regulation shift went live. Additionally, active raises that opened prior to March 15th were able to amend their raise maximums. 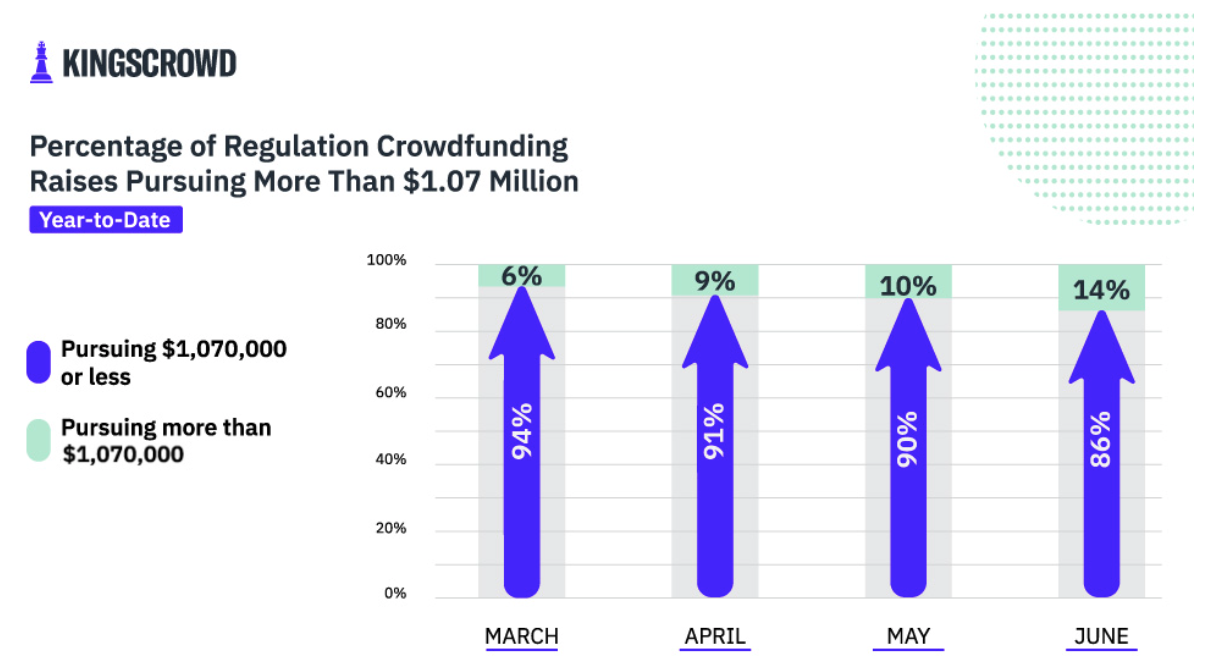 The data shows that the increased limit did indeed have an impact on the online private equity market. There has been a steady increase since March of companies pursuing more than $1.07 million in their Regulation Crowdfunding raises. For the last two weeks of March, just over 5% of companies were raising with a maximum goal above $1.07 million. This went up to 9%, 10%, and 14% for April, May, and June, respectively. From March to June, we saw an overall 147% increase in the percentage of companies raising under the new maximum.

We expect this steady increase to continue throughout the rest of 2021 and beyond as more companies turn to Regulation Crowdfunding to raise early capital. The online private equity market is still expanding. Nearly $280 million has already been invested in startups online this year — easily surpassing last year’s total of $214 million! The increased limit on Regulation Crowdfunding raises is certainly part of that growth. KingsCrowd will continue to closely track these raises and re-examine these exciting statistics as the year goes on.

How to Invest In Startups and Where to Find Them

The Effect of Product Type on Valuation

Comparing the average valuation of startups by their product type… ...