Last week we broke down average company valuations by product type. In order to help evaluate risk, KingsCrowd categorizes every startup by its product type. The four categories we use are: hardware / CPG (consumer packaged goods), services, pharma (pharmaceuticals), and software.

This week, we decided to take this data one step further by drilling down into funding stages. This data includes all active and closed startup funding rounds that raised capital via the online private markets on or after January 1st, 2021. We chose to only examine Regulation Crowdfunding rounds. Additionally, we combined pre-seed and seed stage companies together. 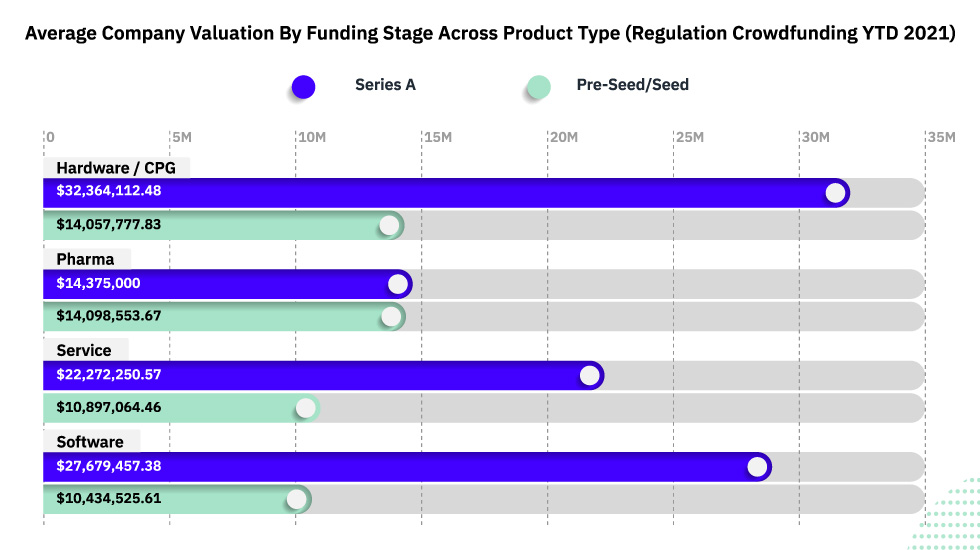 Series A companies had higher valuations on average in all four product categories — which was to be expected. Companies that are in a series A funding round should  be more advanced in their development than seed or pre-seed stage companies. And that progress leads to higher valuations.

Series A hardware/CPG companies had the highest average valuation overall, coming in at just over $32 million. Much of this stems from the nature of CPG companies. At the pre-seed or seed stage, many CPG startups are still prototyping their products. And they’re either pre-revenue or generating small amounts of revenue. By the time a CPG startup launches its series A round, it usually has proven product-market fit and is seeing significant revenue growth. The strong revenue growth, hopefully decreasing production costs and expansion plans drive hardware/CPG companies’ series A valuations higher. Additionally, one series A company in the hardware/CPG category has a particularly high valuation that drove the average up — EnergyX  at $306.4 million.

Pharma companies are the clear outlier on this chart. The pre-seed/seed average valuation and series A average valuation are extremely close — $14 million and $14.3 million respectively. This similarity occurs because of the unique development path that pharmaceutical companies have to take. Like other companies, pharma startups do progress between their pre-seed/seed and series A rounds. However, the kind of progress they make — such as advancing their pre-clinical trials, acquiring other companies, or solving a manufacturing issue — does little to de-risk an investment. This is because it can take years for a pharma startup to receive regulatory approval for its product. Both pre-seed/seed and series A pharma startups face the possibility of never achieving full approval, which makes an investment particularly risky. These companies set lower valuations for themselves in order to offset that risk for investors.

This Chart of the Week examines the overall equity crowdfunding… ...