Cloudastructure’s Republic Reg CF raise went great.  We raised $380k, putting us in the top 10% of all their B2B deals.  The process was smooth and their team was professional and great to work with.  We went into it knowing nothing about Reg CF’s and left feeling like seasoned experts, they really brought us along.

One thing we definitely noticed is that the money comes in like a U-shaped curve:  There’s a flurry of activity up front when you’re fresh meat.  There is another flurry of activity at the end when there is a sense of urgency to get in before it’s gone.  The middle of the campaign is relatively inactive.

The other thing that became clear is it’s all about trending.   If you launch with $0 in your campaign you will forever have $0 in your campaign.  Your deal will be at the bottom of all the lists and no one will find you. You need to get your network (friends, family, existing investors, etc.)  to go in right at launch so you start out trending. If you start trending, you can stay trending. If you can get $50k to come in at launch, you will likely get several times that in your raise.

We worked with Kingscrowd, did a webinar, did a radio interview, was on a TV show called Meet the Drapers that Republic set up for us (!), we wrote articles (like this series)….  In short, we did everything we could think of, and most of it was generously introduced to us by Republic — they really do work hard on your behalf. I can’t say with any certainty what each one brought us in terms of investment, but I can say that all of them together is what made our campaign successful.  I wouldn’t have skipped out on any of them.

$380k is a great Reg CF raise, puts us high up in rarified air.  We couldn’t help but notice, though, that the SEC limit to a Reg CF raise is $1.07M — and some companies get it.  How do they do it and, more importantly, how can we do it?

Another thing we noticed about the Reg CF’s that hit the $1.07M cap is that they all seemed to have some kind of outside lift.  They got picked up in the news, by an investor newsletter, or otherwise promoted in ways the Reg CF platform couldn’t have setup (or likely even predicted) for them.

Nothing ventured means nothing gained, so we went ahead and got our financials audited so we could run a second Reg CF.   This is expensive, and time consuming, costing us $11k and taking a few months. We had some knock-on work to do too; for example, we moved our cap table from a spreadsheet to a hosted solution which ended up being a significant project in itself.

Finally, with all of that done, we had to decide where to host our next Reg CF.  Republic was great, and we didn’t want to be disloyal, but we did want to learn about other platforms as well as get a crack at new investors.  It wasn’t an easy decision but this time around we chose to go on Wefunder. To emphasize that we have nothing but great feelings about Republic, I’m advising another company about doing a Reg CF and took them straight to Republic — they just got approved there and I’m helping them with the process.  There is no higher praise than a continued relationship.

Wefunder’s process and platform has been subtly, but interestingly, different from Republic’s.

First off, we used i-Disclose at Republic to get our Reg CF filed.  It’s one of those systems that asks you a bunch of questions and then prints out a ton of paper work as a result (e.g. do you manufacture or sell pharmaceutical products?  If you say “yes” then a whole bunch of legal-ease is generated). At Wefunder, we started with our previous filing and just made any updates we needed to, which were very minor if at all.

You can always tell the organizations whose business practices were created by lawyers, they’re just more involved and risk-averse than those run by business professionals.  The potential upside being, when they’re lawyer-driven, that they’re more careful in their actions. Republic seems to be a more lawyer-driven than Wefunder, and it showed in a couple of ways.

At Republic we had to do a “bad actor check”.  This isn’t an SEC requirement, you just have to tell the SEC you have no “bad actors” as officers or directors of your company.  At Republic, they insisted we use a third party bad actor check service. The problem is that they wanted me to get name/address/SSN… everything you need for identity theft from our board of directors, one of which is a very high net worth individual.  It was an embarrassing last-minute hold up for me, but we got through it. At Wefunder it was just checking a box.

Another example is that Republic has a CPA that you pay to go over your financials.  At the beginning of the process I tried to put that CPA in touch with our CPA so they could talk directly.  No dice. The Republic CPA wouldn’t talk to them. So they asked a non-financial person (me) questions like “do you have any inventory?”.  Well, I guess we could call these old boards we have laying around “inventory”… which set off a whole storm of issues. Later that same CPA declared, just as we were to go live, that our financials weren’t GAAP compliant.  So I had to get our CPA to weigh in that they were, and he had to cite references, and it all had to go through me.

In any case, at Wefunder we just had our financials audited by an outside firm and it was all done.  No one on the inside to talk to or argue with about what is GAAP and what isn’t. Note that the auditors didn’t have any issues with our financials, so our CPA was right in the first place.

There is one small and easy to overlook difference between the platforms that we’ve noticed, and it gives Republic a slight edge over Wefunder when it comes to features.  For both platforms, people can post questions on your page and you can answer them, social media style. On Republic, they can post the question, you can answer, and they can answer back, and you can clarify some more…  Just like you expect from Facebook, etc. with “like” and “reply” buttons: 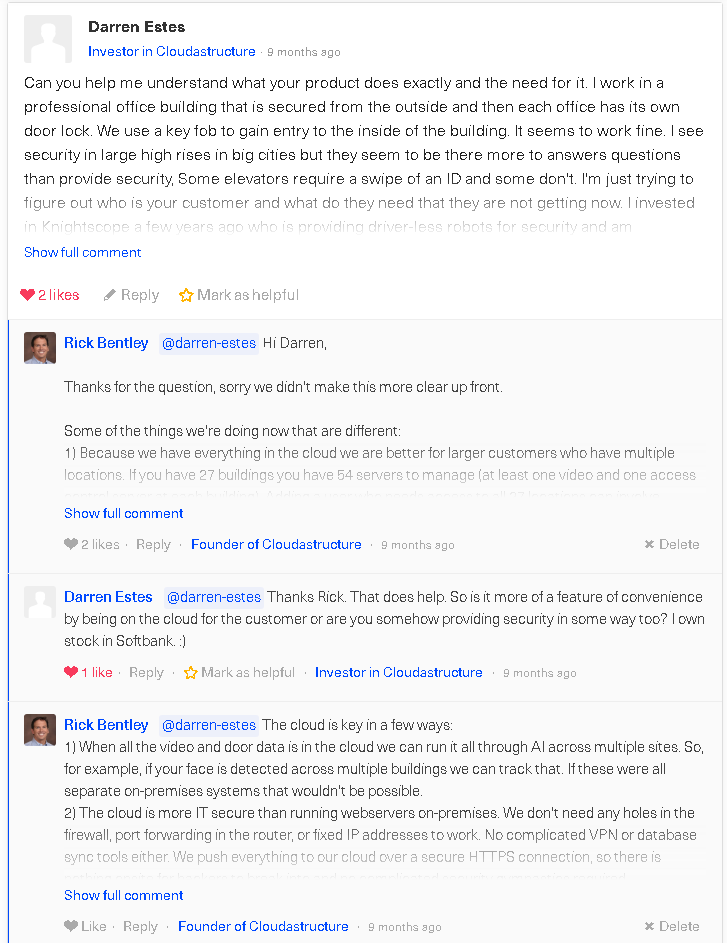 On Wefunder, they post the question, you answer, and the thread is closed.  No more back and forth. If they have any follow up questions, well, that’s a whole new post.

Another difference between the sites is that when you post something on Republic, whether a comment or an update, then it’s permanent.  You can’t edit it. On Wefunder, there is an edit button and you can edit posts/comments after you make them. I was so used to Republic’s lack of an edit button that I assumed it was some kind of Reg CF rule or something.  When I made a typo on a post on Wefunder I actually emailed them asking if they could change it and they were like “uhm, there’s an edit button…” (doh).

Other than these two small distinctions, the platforms both work pretty much the same way.

One last piece of advice is to beware the “rolling close”.  A rolling close is when you can take out some of the money you raised before the campaign is over.  Seems like a basic feature, both platforms say they have it and that it’s pretty simple: they’re both something like that when you’ve gotten over 2x your minimum raise in, you can take up to ½ the money out.  They have to give 5 days notice to your investors and then the money is yours. For both platforms, though, the rolling close process takes over a month. Different reasons/discussions for each of them, but neither one is fast and both are slower than it sounds like it should be on the way in.  As long as you budget for it, not a problem, just don’t get caught unawares.

Anyway, in the end, very positive experiences with both platforms over all.  You can’t go wrong with either one. I think Republic is more hands on and has a more curated deal flow, whereas Wefunder is more hands off and lets you do more of your thing.  Both platforms work great and are staffed by great people who are there to help you out as best they can.

So, now we’re up and rolling on Wefunder.  We have over $200k in and it’s only been up about a month!  We got listed as “most raised this week” in their e-mail update to their investors as well.  We haven’t even done the PR outreach, the company updates, etc. that we expect to in a campaign.  I say we’re off to a great start.

I’ll be sure to update here how Wefunder went when we close.  We’ll have an apples-to-apples comparison then on amount raised, number of investors, etc. so stay tuned.

How Do Crowd Notes Work in the Equity Crowdfunding Market?

This is the third installment from Rick Bentley,… ...

Proposed Changes to Reg CF: Let the SEC Know What You Think

This is the third installment from Rick Bentley,… ...