How Coinbase Raised Its Earliest Capital Via Crowdfunding - KingsCrowd Skip to content
Become an owner of KingsCrowd.
Invest Today!

How Coinbase Raised Its Earliest Capital Via Crowdfunding

Even if you are not a crypto investor, you may have heard of the company Coinbase. Founded in June 2012, Coinbase “is a digital currency wallet and platform where merchants and consumers can transact with new digital currencies like bitcoin, ethereum, litecoin,” and many other currencies.

Want to see for yourself? We pulled the chart below from Crunchbase– 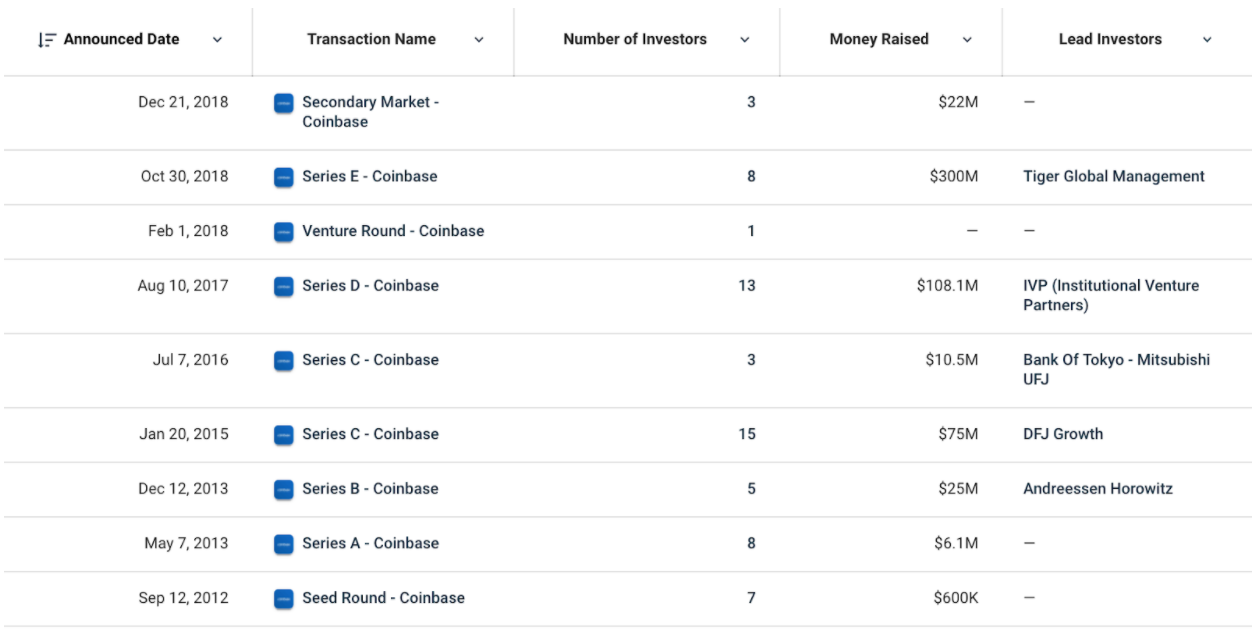 These investment opportunities seem to come around once in a lifetime. Or do they…

What if you could have invested in Coinbase back when it first began? If you check out that chart again, you will see a seed round at the very bottom that closed in September of 2012, just after Coinbase was founded. That round was done via equity crowdfunding.

As outlined in a press release, “Having completed the FundersClub (YC S12) crowdfunding round, Coinbase raised $268,700, a little over its goal of $250,000, from 61 FundersClub members. That’s an average of $4,500 per member. The minimum to invest was $1,000 with $2,500 guaranteeing you a spot in the round. The opportunity was initially only available for 10 days but it was subsequently extended a number of times. It ended up being available for about 1 month in total. Coinbase also raised an additional $350,000 from offline investors.”

Now, just eight years later, Coinbase is among the largest Fintech companies of 2020, with an $8.1B valuation.

Imagine now that you had been a part of that seed round back in 2012, helping a company that now has millions in funding and over $1B in revenue….

Replace FundersClub with SeedInvest, Republic, Netcapital, Wefunder, Microventures, or any other reputable RegCF crowdfunding platform in 2020 and that could be you.

Each and every day we at KingsCrowd aggregate deals that have this kind of potential. We help you to find the next Coinbase, and we provide you with data and research to help you make an informed decision. You can join now for free, browse and follow the companies we aggregate, read long-form research reports, and stay up-to-date with exclusive founder interviews and educational content!

How Can I Sell Private Stocks That I Own?

The latest startup crowdfunding campaigns from 40+ platforms in one… ...