Crowdfunding and the Coronavirus

Our entire society is now at war with the coronavirus,” Wefunder’s CEO, Nick Tommarello, declared last week.  We are currently in the midst of the most seismic, global event since the Second World War. The stock market is a rollercoaster, businesses on main street are seeing revenues drop to zero, supply chains are in chaos; employees are sick, unable to work, and increasingly laid off.  The severity of last week’s 3.3 million jobless claims makes 2008 barely perceptible. 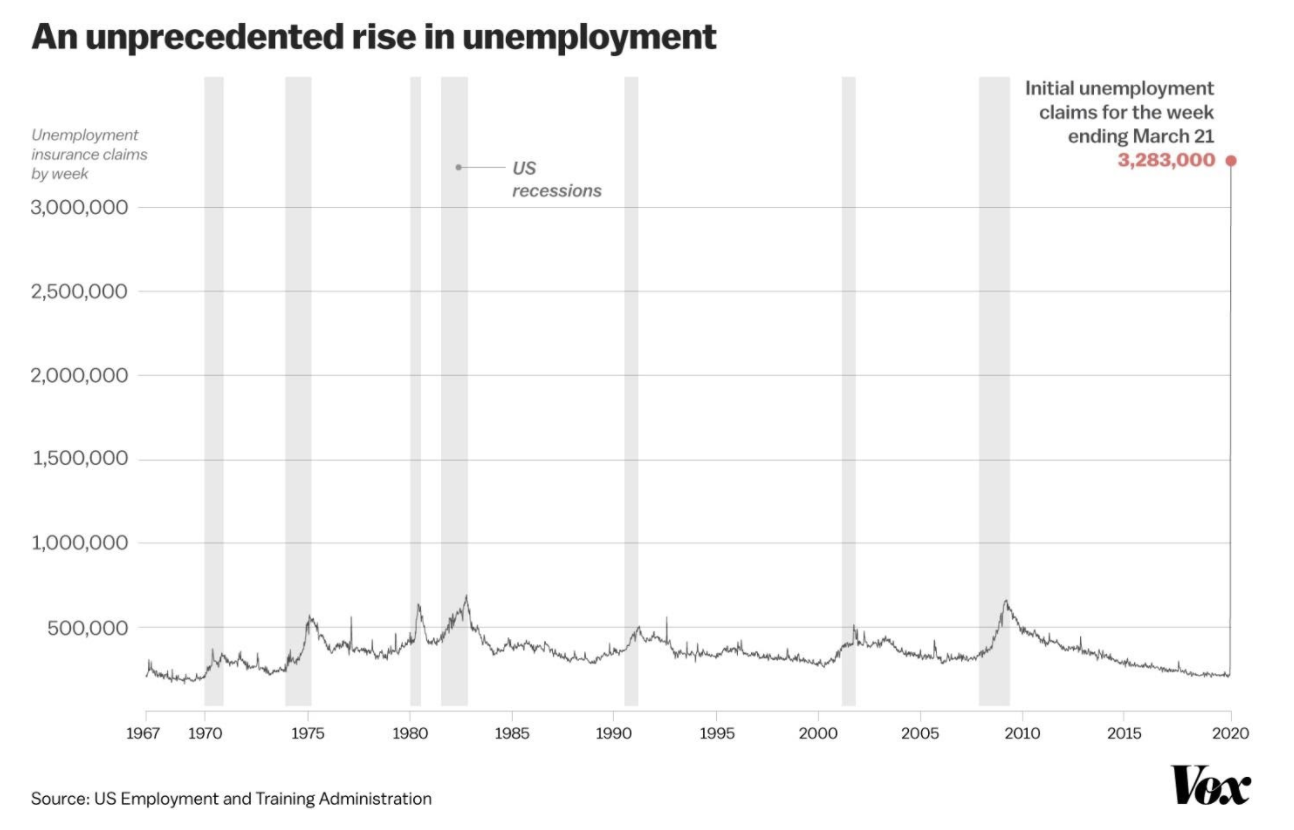 Our economy is collapsing, social norms are being thrown out the window and nobody knows how long this crisis will last.

But amidst the blaze of these economic forest fires, the Wefunder team is working harder than ever; galvanized by the belief that if ever there was a historic moment for crowdfunding, this is it.

2020: The Year of Investment Crowdfunding

We see several forces aligning over the coming months to catalyze the value and importance of investment crowdfunding platforms like Wefunder.

Access to capital for startups and small businesses will dry up through the rest of the year. 2008 saw small business lending eviscerated and venture capital raised from LPs drop by 58% from 2008 to 2009.

Startups that would have trodden the institutional path in 2019 will increasingly find that path barred in 2020. Many more founders will turn to Regulation Crowdfunding for capital.

To be clear – companies raising right now will raise less money on crowdfunding than they did 12 months ago, after all, investors just saw their stocks lose half of their value. That being said, the significant increase in the quantity and quality of companies launching on Regulation Crowdfunding platforms over the coming months (and years) will massively outweigh the hypothetical reduction in investment volume on a like-for-like basis.

Another important development here is the SEC’s proposed rule changes to Regulation Crowdfunding, most of which we expect to be implemented later this year. Through adjustments such as lifting the 4(a)(6) maximum raise from $1.07 million to $5 million, increasing accredited investor annual investment caps, and facilitating “testing the waters”, these rule changes would significantly improve the Regulation Crowdfunding exemption from the perspective of both issuers and investors.

I look forward to writing a repeat Kingscrowd blog post in March 2021, to put these predictions to the test. But if Wefunder’s investment volume hasn’t at least tripled year-over-year, then I’m buying Chris Lustrino a magnum of champagne in a San Francisco bar that’s hopefully open by then.

Yesterday Jason Calacanis told me that “now is the best time to be an angel investor.”  His (albeit mass email) focused on the point that valuations and investment opportunities actually looked a lot better for investors in 2009 than in 2007. In Calacanis’s own words:

“At that time the valuations for startups like Uber and Thumbtack were $10m — combined!

For the past couple of years, startups run by founders who aren’t qualified enough to make a cup of coffee for Travis and Marco were demanding $15m valuations for copycat ideas with anemic performance.

A hot market filled with easy money makes everyone think they should start a company — which is completely reasonable.

I believe that we’re headed back to 2008-2010 valuations this year and it’s going to be fantastic for angel investors who are brave enough to place bets.”

But here’s the beautiful thing about Regulation Crowdfunding: Later on in Calacanis’s email, he outlines the math for his recommendations on readers venturing into angel investing:

Uber, Airbnb, Square, WhatsApp – all these companies were founded in the aftermath of the Great Recession. Wouldn’t it be awesome if more Americans got to participate in the wealth created by the next wave of explosive startups created in 2020 and 2021?

In the coming months, we expect to see a significant surge in small businesses (especially main street businesses like restaurants, bars, coffee shops, etc.) seeking to raise capital to tide them over until things return to normal. Companies with retail storefronts’ revenues have completely collapsed over the last few weeks, the median restaurant having a buffer of just 27 days of cash. The underlying structure of millions of these businesses was robust – they just need money to bridge their short-term cash-flow gap (see the illustrative chart below). 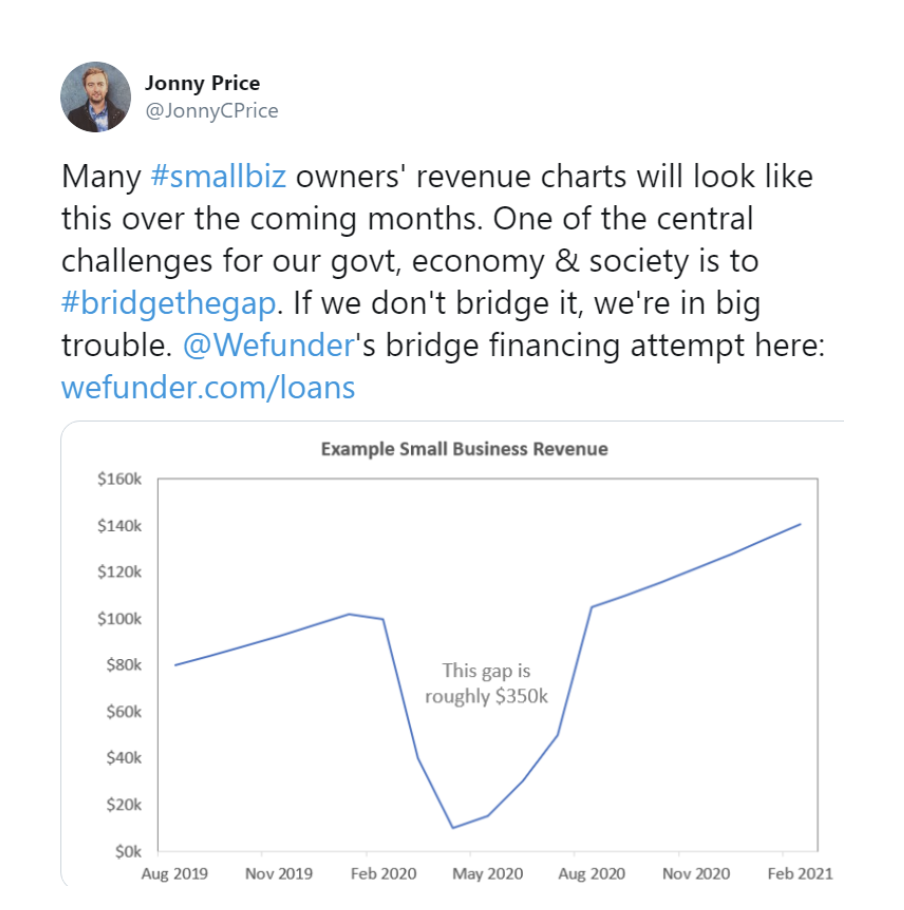 And what better source of capital for a local restaurant during this crazy time, than the customers and community members who love them, eat there all the time, and would be incredibly sad if that restaurant closed down over the summer.

Some businesses have turned to GoFundMe (a donations crowdfunding platform) to raise cash immediately. I’m not opposed to that idea. And gift card sales can be valuable sources of cash for small businesses too. Small businesses are an unlikely destination of charity dollars. I would expect most of them to raise 10x on Wefunder via a loan than what they could raise as charity on Gofundme.

It’s not just on the small business side that we expect to see (and are seeing) an outpouring of community support for businesses. Startups tackling the coronavirus will also see a surge in investing – dually motivated by investors’ desire to support innovative founders trying to make a positive impact in the war against the virus, and their desire to make money by investing in a company whose model positions them to grow through the coming months. Caribu, a Wefunder portfolio company that raised $1.4 million on Wefunder last year, makes an app that allows people to read books to their children over the phone. Their product is beautifully enabling families to stay in touch better, across the social distance. And their KPIs are surging right now.

Of course, I don’t have a crystal ball. Maybe the economy, stimulated by the $2 trillion stimulus package that passed Congress last week, will rebound quickly and strongly, and LP funding will be more resilient than it was in 2009. Or maybe the investment volume of unaccredited investors on platforms like Wefunder will actually be more sensitive to economic recession than that of institutional and accredited investors. There was no Regulation Crowdfunding in 2008 so we don’t have that benchmark yet.

But based on a few weeks of early data, Wefunder’s metrics look robust. With a couple of days left in the month, March 2020 has been our best ever month for investment volume, up 34% from January 2020, which was our previous best month. This at a time when CBInsights projects global funding to private companies to decline by 16% in Q1, 2020 over Q4, 2019 (a decline that will surely accelerate in Q2). 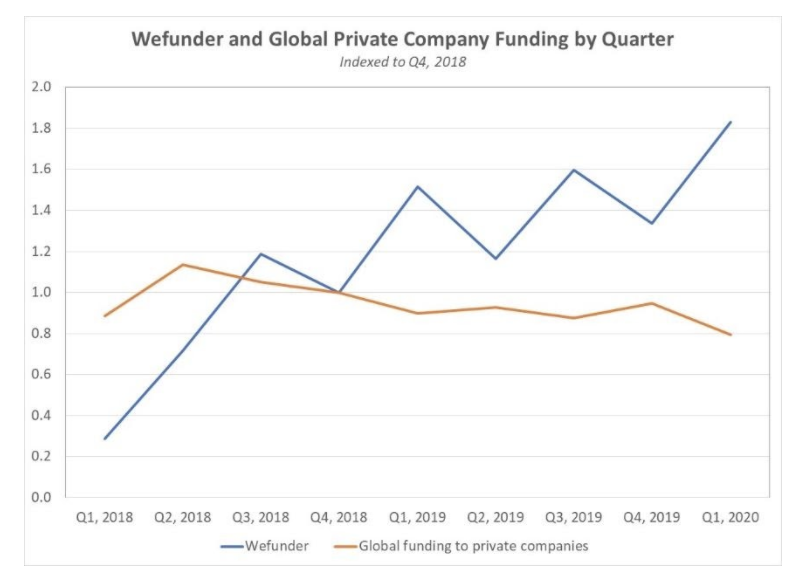 March 2020 will also be Wefunder’s best-ever month in terms of the quantity and quality of companies entering into our pipeline. And this metric has been accelerating over the last couple of weeks. We’ve now had over a thousand applications for our Fight The Virus accelerator program, through which startups tackling coronavirus – either directly or indirectly – will receive up to $1 million in investment, and mentorship from world-class founders. And we’ve had hundreds of small businesses throughout America reach out about our low-interest disaster relief loan, which we rolled out last week. (To learn more about our various efforts to join the fight against coronavirus, please see this blog post, written by Wefunder’s CEO last week).

We’re putting our money where our mouth is too. As noted above, nationwide unemployment claims spiked to 3.3 million last week. But we just doubled the size of our BD team.

In the eponymous musical Hamilton says “God, I wish there was a war; Then we could prove that we’re worth more than anyone bargained for”. Nobody wished for this crisis. But now that we’re in this war, you better believe that all of us on the Wefunder team are fighting as hard as we can to beat this virus, rebuild our economy, and uphold our Public Benefit Corporation charter to “Defend the American Dream”.

We’ve got a lot of work to do.

This Chart of the Week looks at how holidays weekends… ...

Our entire society is now at war with… ...