California is the home of many startup founders raising capital through the online and offline private markets. California and other startup hubs like New York also have the highest concentration of investors. While investors attract founders and vice versa, the democratization of startup investing gives investors the opportunity to support companies regardless of location. In fact, 60% of online startup deals in 2021 were launched outside of California.

In this Chart of the Week, we are looking at the home states of startups that raised capital via Regulation Crowdfunding in 2021. But is there any correlation between a state’s population and the number of startups that come from it? 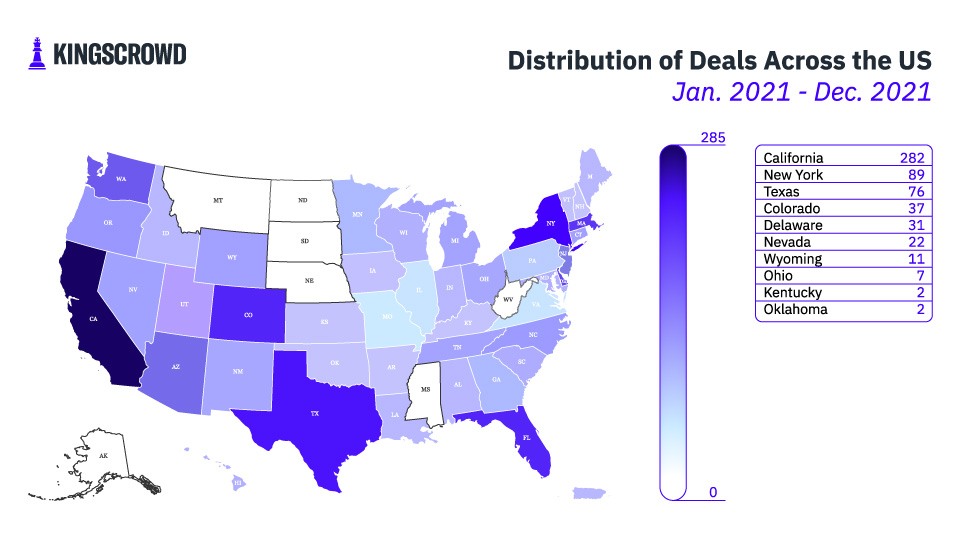 California, New York, and Texas represent close to 64% of all the raises launched last year. Unsurprisingly, they also have the three highest GDPs among the 50 states. On the other side of the spectrum, six states had no startups raise capital online, and Montana was the state of origin of one raise only.

Looking at these figures in terms of population, there does not seem to be a relationship between highly populated states and high numbers of startups. The states with the lowest raises-to-population ratios are Kentucky, Oklahoma, and Wyoming. While Kentucky and Oklahoma have only two raises each, Wyoming founders launched seven raises in 2021. Interestingly, the states with the highest raises-to-population ratios are different from the states with the highest number of raises. The state of Delaware has the highest ratio with 31 raises for a population of less than 1 million people. Indeed, many companies choose to incorporate in Delaware as the state works to have up-to-date business legislations, and most corporate legal disputes are addressed promptly by the judges. Besides Delaware, Wyoming, Nevada and Colorado had the next highest raises-to-population ratios. Not only are these three states located in the same area, but they all have low corporate tax requirements. Wyoming doesn’t levy any taxes, Nevada only imposes gross receipt taxes and Colorado has a relatively low income tax rate of 4.63%. In addition to low taxes, Colorado is seen as a dynamic and enjoyable place to live while offering a cheaper cost of leaving than Silicon Valley. As work from home has taught us, location is an asset for companies looking to attract talented employees.

Overall, the number of raises per state in 2021 did not correlate much with the population. And that’s a boon for both investors and founders. Founders won’t find the amount of capital they can raise restricted due to their home state. And investors can judge deals by the company’s concept, business models, and team without having to worry strongly about where the startup is based.

Stay tuned as next week we will analyze the amounts raised for startups in each state.

Regulation Crowdfunding Trend Over the Years

The Surprising Truth About Long-Term Debt

This Chart of the Week breaks down long-term debt by… ...