The online private market helps to democratize startup investing in more ways than one. Not only is investing in startups no longer restricted to the wealthy, but we are seeing more diverse founder representation. Thus far in 2022, mixed gender founding teams make up 18.6% of venture deal flow, with woman-only founder teams making up 6.8%. And these startups have received 14.9% and 1.9% of deployed capital, respectively. Online startup investing has historically outperformed venture capital when it comes to supporting women founders. But when we took a closer look it became clear that there was a stark difference between the stats for Regulation Crowdfunding (Reg CF) and Regulation A (Reg A) raises. 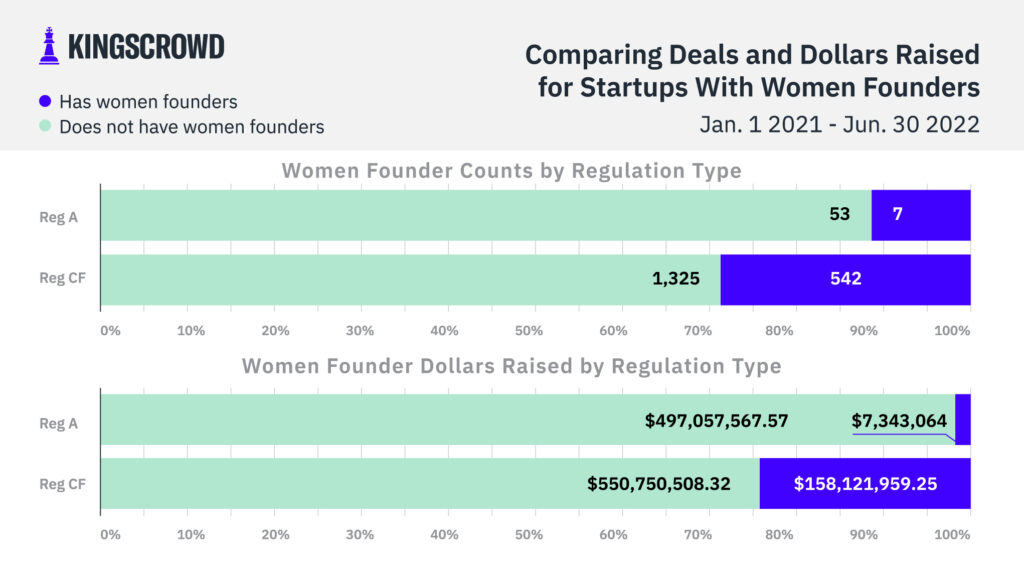 I have a few theories for why Reg CF deals outperform Reg A in funding women founders. Reg A companies tend to be more mature than startups using Reg CF, and they may be more likely to have venture backing. Receiving venture backing is an obvious hurdle for women founders even in 2022. But Reg CF has a lower barrier to entry and is often viewed as a more welcoming alternative for early stage startups. Yet, we would expect some companies that successfully raised capital via Reg CF to raise further capital via Reg A as they grow. Is it possible that startups with women founders are more likely to fall off in this transitional period, perhaps due to venture oversight?

Reg A deals also have higher investment minimums on average (often around $1,000), and some require investors to be accredited. Women angel investors are a rare breed, but the demographic does appear to be growing. Could a gender skew within the investor community also contribute to the skewed capital deployment at the Reg A level? Are women more likely to invest in women? As we begin to see more women angel investors, we may begin to see more capital flow into Reg A deals with women founders.

This discrepancy is probably the result of a combination of factors. Fewer startups with women founders in Reg A deals also means that there are more opportunities for outliers to skew the numbers when it comes to funding. And this particular batch of data had a few startups with women founders that had very low investment goals in comparison to the usual Reg A deal.

It’s important to examine these stats regularly because women founder trends are important to the health of startup investing as a whole. A lot of research has gone into proving that more diverse teams create better outcomes. Specifically, a McKinsey study has reported that racially and gender diverse teams are 35% more likely to have stronger financials than their industry average, and those in the “top quartile for gender diversity were 15% more likely” to financially outperform. More diverse teams bring better financial success, and that leads directly to higher returns for investors. Diversity is one proven success indicator that you can consider when investing in early stage startups to maximize returns. And finding diverse teams is easy with the filters for women founders and minority founders on our Companies Search tool.

How KingsCrowd Is Disrupting Startup Investing

Founder & CEO of KingsCrowd, Chris Lustrino sits down with… ...

Wefunder is hosting a Demo Day for 13 startups that… ...