What is a fair startup valuation? Most investors ask themselves this question while making an investment decision. The common assumption is that the lower the valuation, the better chances you have for high returns.

Startup valuations are usually determined by the company’s founder(s). Some founders determine their startup’s valuation based on its assets. But most of them use current revenue and revenue projections to determine the value of their companies. And viewing a valuation in light of a company’s recent revenue may be one of the best ways to numerically assess how reasonable the valuation is. A startup’s traction can also be an indicator of its future performance. 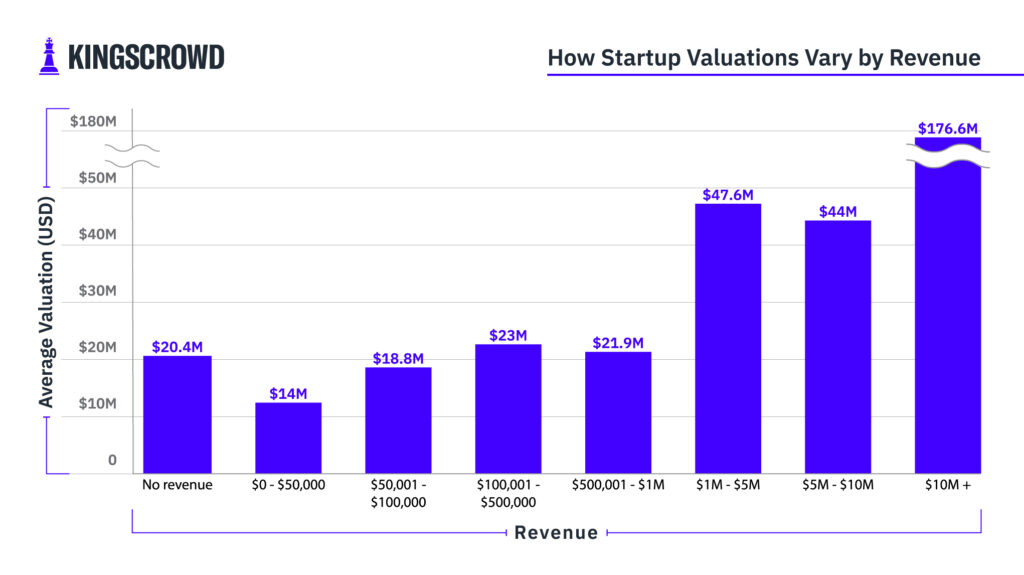 All Regulation Crowdfunding and Regulation A raises that closed between Jan. 2021 and Jun. 2022.

Our data shows that startup valuations tend to increase alongside revenue. But the overall increase doesn’t follow a straight line. In fact, startups with no revenue had a higher average valuation than startups with less than $100,000 in annual revenue. A possible explanation for this behavior could lie with high-tech and medical startups. These companies tend to not have revenue during their first years of existence, due to their extended product development cycles. However, these companies may give themselves high valuations to reflect how disruptive their technology is and the years of research and development they’ve committed.

For startups with less than $1 million in annual revenue, average valuations tend to stay close to $20 million while the median (or very middle) is around $10 million. The wide difference we see between the average and the median here is due to outliers. Some extremely high valuations are justified by a few high-potential companies with disruptive technologies. But some are entirely unjustified. In 2021, CyberLandr raised capital on StartEngine at a $400 million valuation. The company plans to modify Tesla Cybertrucks into recreational vehicles. And while it claims to have $100 million in pre-orders, it only had $111,264 in previous revenue at the time of its raise. Major disparities between revenue and valuations like this can serve as a signal for investors to really consider whether they think a company’s assets and potential are worth the price given.

At the $1 million in annual revenue mark, we see a clear jump in average valuations. And it makes sense, as these startups have clearly begun to prove their product-market fit and their potential for growth. These also tend to be growth stage startups, which are more mature companies that may have patents or other valuable assets. That said, there are still startups with substantial revenue that have low valuations. Half of companies with $1 million to $5 million in revenue were valued at less than $20 million, and half of startups with $5 million to $10 million revenue were valued at less than $30 million. Investors looking for bargains can still find them.

Does all of this mean that investors should never invest in startups that have millions in annual revenue? Not necessarily. A better way to frame the issue is in terms of risk and return. Investors who want to optimize for returns should aim for startups with valuations below the averages presented here. Those companies will give them the best chances at outsized returns in the long run. However, other investors might prefer established companies with proof of product-market fit in order to reduce risk. Startups with traction have a greater likelihood of success than those without (though success still isn’t guaranteed). Investors who want to take on less risk while still investing in high growth companies might be willing to trade a slightly high valuation for strong financial performance.

The newest startup equity crowdfunding campaigns from across more than… ...

The Pioneering Females Of Equity Crowdfunding

The latest startup investment deals from across 20+ platforms collected… ...