Hightimes Holding on Self Managed 2018 - KingsCrowd Skip to content
Become an owner of KingsCrowd.
Invest Today!

Connect people to the plant

Hightimes Holding, with a valuation of $225 million, is raising funds independently through Reg A+ crowdfunding. The company is engaged in the publication of monthly prints and online magazines and the production and sponsorship of trade shows and events. The publications of Hightimes Holding include High Times Magazine, The Cannabis Cup, Digital Publishing, and Green Rush Daily. Adam Levin founded Hightimes Holding in 2016. The current crowdfunding campaign has a minimum target of $5,000,000 and a maximum target of $50,000,000. The campaign proceeds will be used for debt repayment, brand development, marketing, expansion of events, and working capital.

Not every company that conducts a RegA+ offering actually utilizes one of the major platforms such as Wefunder or SeedInvest. Some decide to list with an independent website and will work with a service provider on the backend.

One such RegA+ opportunity currently raising is High Times, one of the original publishers of marijuana related magazines and host of major cannabis events.

Although the company is well established, as in it has been around since the 70’s, and it has millions in sales, we think its heavy debt burden and lack of growth characteristics are ill-positioned to provide an attractive return to investors.

For the reasons below, we would de-prioritize this investment opportunity in favor of more attractive KingsCrowd Top Deals that you can check out HERE.

1. Unjustified valuation: High Times is selling around $43M in this RegA+ offering, which would suggest a valuation of $330M, 23X 2017 sales. Typically, revenue multiples beyond 10X are driven by outsized revenue growth rates (e.g., 75% to 100% YoY growth). Instead, High Times experienced single digit declines in sales. With this reality, you would expect a valuation not to exceed a 3 to 6X revenue multiple. 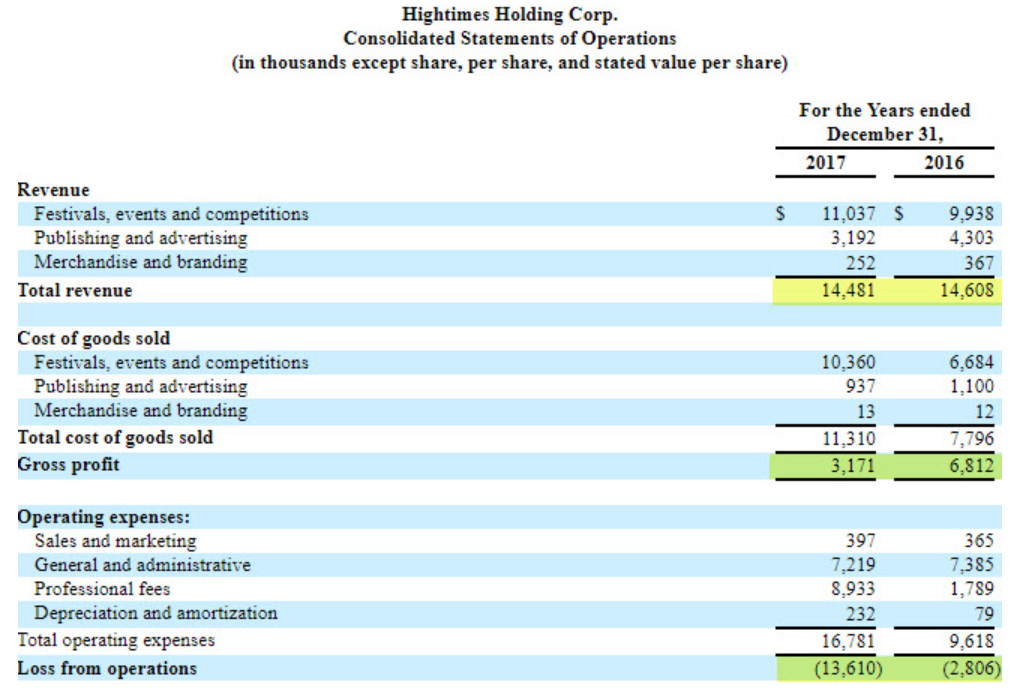 The one area the company seems to be pivoting towards is hosting more events rather than focusing as much on publishing and advertising. Unfortunately, the profitability is significantly lower on events, which require capital intensivity over traditional advertising. This further adds to the concern around the 23X revenue multiple on the valuation.

2. Heavy Debt: Despite the company being around for many years, it continues to function at an operational loss, with $13.6M in operating losses in 2017 alone, significantly higher than 2016 operating losses of $2.8M. Part of this was around a one time charge, however it is not enough to negate the major jump in losses. In total the company has $53M in liabilities on the balance sheet, and is looking to raise $50M in the offering.The concern is that the team is raising $50M to essentially manage bad debt expenses with no plans of how to improve sales or begin to operate in margin positive territory. Despite a hot and growing cannabis market we do not think the valuation and terms of the deal with this much debt on the books is justifiable, nor will it drive a positive return for investors in the long term. Too much capital restructuring and new management is needed to get this company back on course.

3. Failed Acquisitions: Hightimes Holding Corp. was actually established in December 2016 to acquire Trans-High and the THC Group, which is considered the publisher of the original stoner magazine. In 2017, this holding company was entering into a merger with Origo Acquisition Corp., at a $250M valuation but it fell through. Without an ability to be acquired the team is looking to move quickly to raise capital through this RegA+ offering to cover the cost of its beckoning debt.

4. Out of date: Some skeptics believe that as the cannabis industry becomes more mainstream the idea of having a stoner brand no longer makes as much sense for consumers as more people look for professionalized brands and services in the cannabis market. For these reasons we think that the product / service offering of High Times will continue to fall out of favor with consumers in the years to come.

With a growing debt burden the capital raised will not even be readily available to invest in future innovations. The event offerings the team is investing in are lower margin then its bread and butter publishing / advertising business and sales are declining amidst a failed acquisition.

For these reasons we think the investment opportunity presents too many risks without nearly enough upside for investors especially at the 23X revenue multiple it is raising at, which is even high for a tech company, never mind an event / publishing brand.