It’s soon to be Memorial Day weekend! We want to thank all those who have served our country and continue to do so. In honor of Memorial Day, this week we want to highlight veteran founders.

Through the online private markets, investors have the power to support all kinds of founders, whether they are veteran founders, minority founders, female founders, or others. To make it easier for investors to consciously back founders that have served our country, about six months ago KingsCrowd began tracking data on veteran founders. (Note: founders must self-identify as veterans to be tracked as such by KingsCrowd). This week we broke down that data across platforms. These numbers include active and closed raises, both Regulation A and Regulation Crowdfunding. It is also possible that there are more veteran founders raising capital online who have chosen not to emphasize their past service. 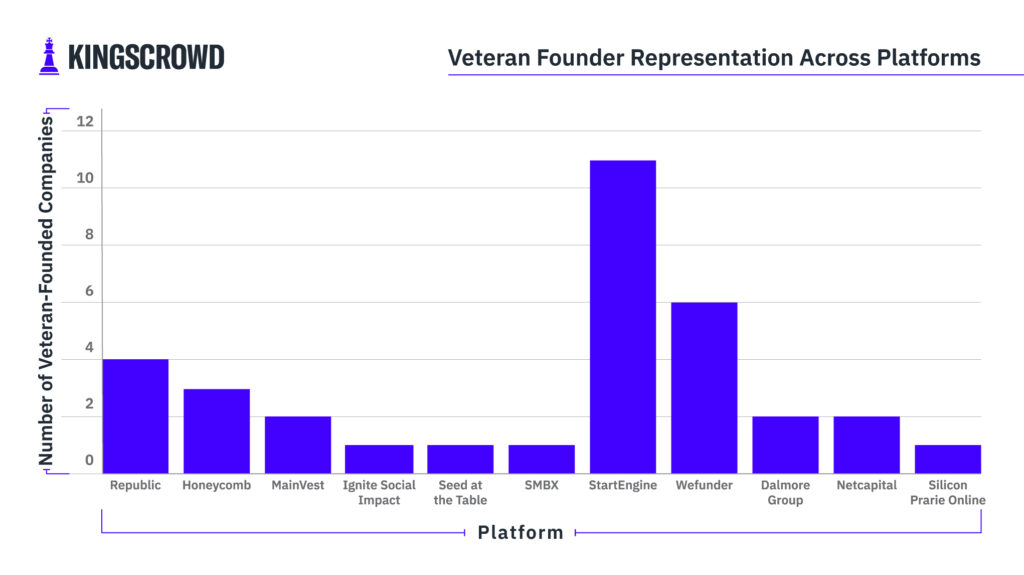 Since we began collecting this data, StartEngine has seen the most veteran-founded companies with 11 total. Wefunder had the next highest count at six, and Republic followed closely behind with four. Honeycomb – which hosts primarily debt and revenue share deals – had three veteran-founded companies. These numbers are roughly proportional to the total deal flow we see on each of these platforms, as StartEngine, Wefunder, and Republic consistently make the top five platforms for total deal flow.

Those who serve in the military are known for their discipline, strength, and commitment, which are all excellent traits to have in a startup founder. In fact, several successful companies that grew to become household names were started and run by veterans. FedEx founder Frederick W. Smith served in the Marine Corps for three years. Sam Walton, founder of Walmart, was a captain in the Army. ID.me is a digital identity verification service that was founded by veterans in 2010 and now has more than $275 million in funding.

We are excited to see how this data changes as we continue to track veteran-founded companies. And we celebrate and sincerely thank all those who serve and have served this country. Happy Memorial Day!

Note: All data used for the Chart of the Week comes from the KingsCrowd database and represents a snapshot of the crowdfunding market.

In this episode, Chris Lustrino welcomes Alex Ovchar, a lead… ...

Due Diligence Is The Key To Startup Investing Success

Equity Crowdfunding is a high-risk, high-return area of investment. This… ...

Food upcycling is an environmentally friendly trend that makes use… ...