How Many Worms Did Startups Offer Early Bird Investors? - KingsCrowd Skip to content
Become an owner of KingsCrowd.
Invest Today!

How Many Worms Did Startups Offer Early Bird Investors?

Companies are constantly looking for ways to differentiate themselves among the crowded field of startups raising money on platforms like Wefunder, StartEngine, Republic, and others. One method is to show significant early investor traction in the first few weeks of a fundraise.

In an effort to generate early investment traction — and reward customers, who are often the earliest investors — many companies offer “early bird” discounts. With a discount, early investors can invest at a more attractive valuation that is lower than the company’s actual valuation, similar to a grand opening sale. Discounts can be as low as 1% and as high as 71%.

In today’s Chart of the Week, we’ll look at typical early bird discounts for companies that have raised Regulation Crowdfunding (Reg CF) or Regulation A (Reg A) rounds since January 2020. 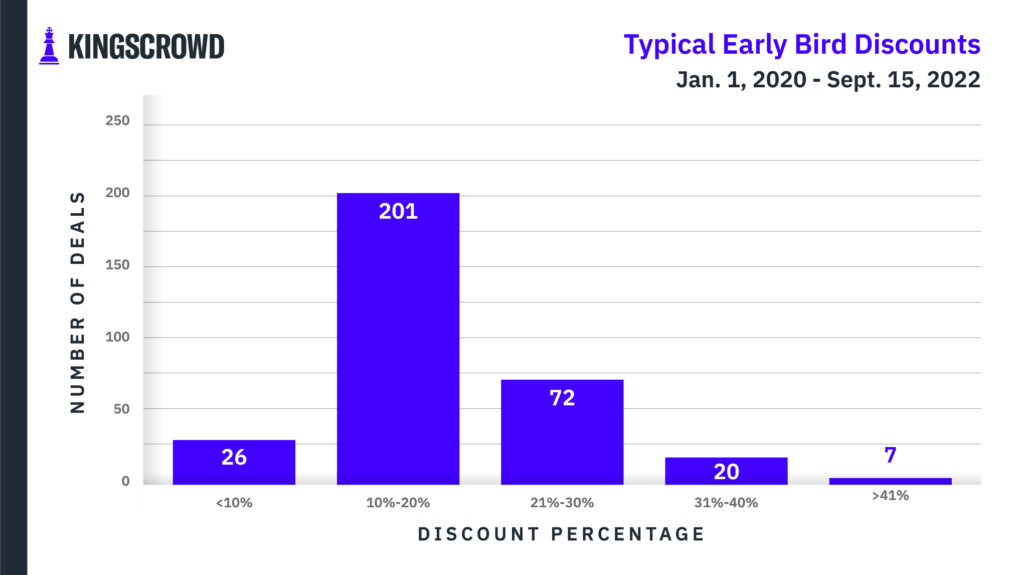 Since January 2020, KingsCrowd has tracked a total of 1,283 Reg CF and Reg A raises (SAFEs and convertible notes). Of those, 326 (25.4%) offered early bird discounts. And among those 326 deals, 288 (or 88.3%) were on Wefunder. Wefunder is the clear market leader in offering early bird discounts, so investors who like early bird discounts should primarily check Wefunder to find these types of deals.

This is a relatively new trend in the online startup investing space. Early bird terms started becoming more popular just last year. In 2021, there were 198 early bird raises, up from just 20 in 2020. In 2022, there have been 110 early bird raises so far. As companies continue to see success with these discounts, I expect the number of early bird discount offerings to continue to rise over the coming years, which means more chances for investors to benefit from favorable deal terms.

Overall, early bird discounts between 10% and 20% have been the most common since 2020, with 201 (61.7%) companies falling within this threshold. This makes sense given that a 10% to 20% valuation discount is both enticing to investors and not too steep of a valuation drop for the company. In contrast, only seven (2.1%) early bird deals had discounts of 41% or above, so investors shouldn’t be surprised if they’re hard to find.

Early bird terms offer a great way for investors to optimize returns with (likely) the lowest valuation that will ever be available for a company. You may come across companies that seem overvalued at first but are actually fairly valued or undervalued when the early bird discount is applied. Therefore, it is important to be on the lookout for these early bird raises, as they may enhance your returns.

The latest startup investment deals from more than platforms collected… ...

Companies are constantly looking for ways to differentiate… ...

Customer Acquisition Cost: What Is It and Why Is It So Important?