At KingsCrowd, we’ve seen that investors have steadily increased their investments into startup deals in the last few years. The trend has been supported by the Regulation Crowdfunding (Reg CF) limit increase from $1.07 million to $5 million at the beginning of 2021. With more startups than ever to choose from, what factors motivate investors to support a particular company?

In this Chart of the Week, we look at the relationship between startups’ revenue and the dollars invested into online deals. The data covers all closed Reg CF deals since 2018. 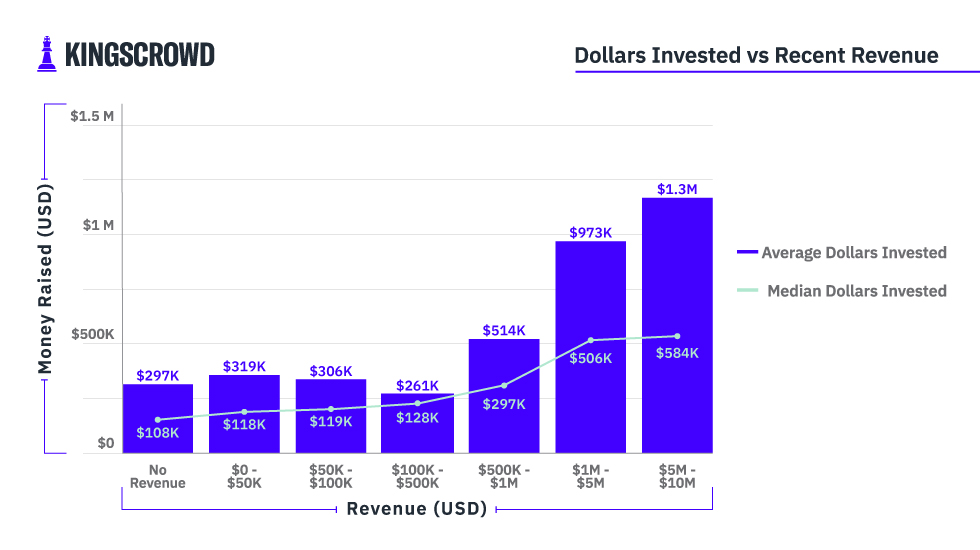 Startups with less than $500,000 in revenue received average total investments around $300,000 – regardless of where in the range of no revenue to just under $500,000 in revenue they fell.  But once the $500,000 threshold is passed, deals gather significantly more investments as their revenue grows. Perhaps most importantly, there is a strong correlation between startups’ revenue and the maximum funding goal set for their round. From no revenue to $500,000, startups deals have a maximum average between $730,000 and $830,000. Between $500,000 and $5 million in revenue, startups often set their maximums above $1 million. And startups with revenue of $5 million or more usually want to raise more than $2 million on average. This trend indicates that startups with lower revenue choose to limit their funding rounds.

But even with lower deal maximums, investors are ultimately the ones making the investment decisions. And it is curious to see that revenue does not appear to influence an investor’s decision when a startup has brought in less than $500,000. So what are investors looking at in these cases?

At KingsCrowd, performance is one of five key factors we assess. A founding team with diverse backgrounds, skill sets, and startup experience can increase the chances to generate returns on startup’s investments. We also consider the market and the competitive landscapes companies are operating in. Startups must be differentiated enough to generate profit, but they can also benefit from a little competition and a highly growing market. Finally – and especially with low revenues – we look at companies’ valuations. Despite their potential, startups that are overvalued can limit the potential returns for investors. The risk is that startups will exit with lower or poor multiples, and despite companies’ successes, investors will not generate the return they expect.

Therefore, while revenue is an indicator of a startup’s performance, investors can and should look at other criteria before making an investment decision.

Note: All data used for the Chart of the Week comes from the KingsCrowd database and represents a snapshot of the crowdfunding market.

At KingsCrowd, we’ve seen that investors… ...

At KingsCrowd, we’ve seen that investors… ...