Keeping Any Eye On Our Deals To Watch - KingsCrowd Skip to content
Become an owner of KingsCrowd.
Invest Today!

Keeping Any Eye On Our Deals To Watch

If you’ve spent any time on the KingsCrowd site, you know that one of the benefits they provide their readers with is the in-depth dive on offerings they consider “Top Deals” or “Deals to Watch”, developed based on their defined due diligence procedures. In 2019 alone, they have identified 43 “Deals to Watch” that they have posted about on the site. These deals cover a wide swath of investment opportunities, as illustrated by the graph below, with a heavy focus on the “Software, Services, and Apps” category. 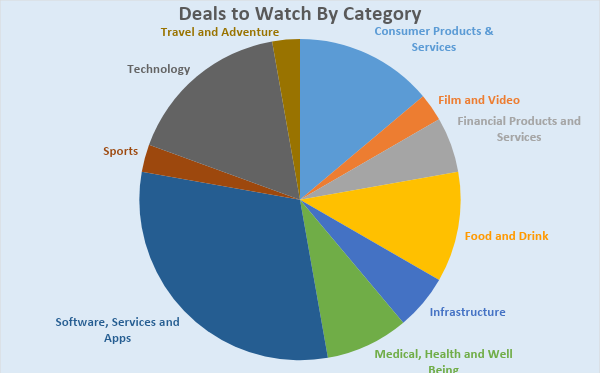 This week, I thought it’d be worthwhile to dig a little into KingsCrowd’s 2019 “Deals to Watch” and see whether the deals were worth worthy of the rating.

As I mentioned, there have been 43 “Deal to Watch” write-ups to date in 2019, and my data covers 36 of those offerings (some of the offerings were Reg A or other non-Reg CF offerings).

On average, these offerings were looking to raise just shy of $40,000, which if you’ll recall from a few weeks ago, is right around the average for all Reg CF offerings. They also have an average valuation of about $11,000,000, slightly below the average for the full sample of offerings. So on some key offering metrics, KingsCrowd doesn’t appear to be focusing on offerings that we would consider “outliers” on offering fundamentals.

And KingsCrowd does its due diligence. On average, a “Deal to Watch” is posted about two months into its offering, though this number is skewed a bit by some longer running offerings (it took a while to come around on Eazl). The median opportunity is identified just over a month into the offering (33 days), and 75% of the “Deals to Watch” are identified in just over 2 months after going live or less. They also don’t wait until the end either. “Deals to Watch” typically still have 2 months left in their offering as well when the write-up is posted.

The whole premise behind a “Deal to Watch” is that it is a deal in the top 10% to 20% of the due diligence funnel, and, by definition, is a deal you should keep your eye on. So what happens to these deals after KingsCrowd identifies them as a “Deal to Watch”?

Well for starters, they start with a good foundation, as 75% of the offerings that get the “4 Kings” rating have already met their target goal. After posting, three more of these companies have met their target, with two more still active and on track to reach their goal (they’re not without their missed calls either, but the good FAR outweighs the bad, in my opinion).

And what about the dollars and sense of it all? At the time KingsCrowd identifies these deals, they have raised, on average, $187K. In the time after the designation, these deals continue to raise funds, closing with an average fundraise of $273K. So these “Deals to Watch” are definitely deals that still have room to grow when they are identified. And, to have some fun with some short window correlations, in the 7 days after KingsCrowd identifies these offerings as “Deals to Watch”, these offerings raise, on average, $8,719. In the 7-day window prior to this designation, they raise $7,544…that’s almost a $1,200 increase (I’ll leave the correlation vs. causation debate up to you, but those numbers look good to me).

So what’s the point of all this? If you’re coming to a site looking for crowdfunding recommendations, and where to spend your investment dollars, KingsCrowd does a great job doing their due diligence and zeroing in on offerings that are worth keeping your eye on.

We break down the latest RegCF deals available for investment… ...