The Liberty Access Technologies team has been selected as a “Deal to Watch” by KingsCrowd. This distinction is reserved for deals selected into the top 10%-20% of our due diligence funnel. If you have questions regarding our deal diligence and selection methodology, please reach out to hello@kingscrowd.com.

America is slowly going through an energy and transportation transition.  As the nation moves away from traditional fossil fuel vehicles and toward options tied to alternative energy, opportunities for innovative companies are bound to arise.  Some of these will be connected directly to the vehicles themselves, while others will emphasize ancillary products and services. One piece of this move toward a healthier environment is to abandon the old diesel school bus fleet and replace it with electric buses.  Liberty Access Technologies, a startup with a presence in multiple US states already, understands this trend and is (pun intended) hopping on the bus to ride this wave with its HYDRA system of charger controllers.

In an effort to capture a piece of the transition from fossil fuel vehicles to electric vehicles, the management team at Liberty Access Technologies has worked hard to create its HYDRA system.  Designed as a charger controller, the firm’s technology connects to the grid, where it extracts energy from, and distributes it as efficiently as possible to vehicles connected to its charging stations.  Not only does its system keep track of valuable data, such as usage statistics and the carbon footprint impact of the vehicles in question, it strives to charge the vehicles in question only during the best time of the day when possible and it controls the pushing back of energy into the grid for optimization purposes.

Through its digital platform, the company also enables customers to purchase charging sessions using its PayByMobile service, plus the company provides other useful payment and monitoring options.  Unlike most other charging stations, management asserts, Liberty Access Technologies utilizes AC fast charger controllers for private customers. These units provide the flexibility that public access charger controllers don’t while coming in cheaper than the DC units.

Since its founding in 2009, Liberty Access Technologies has done well to scale itself up.  In 2018, revenue generated by the firm totaled $813,613, up from $607,397 a year earlier.  While operating cash flows turned from a positive $88,964 in 2017 to a negative $103,523, the company’s net loss of $209,191 narrowed significantly, coming in at the end of last year to a loss of $75,356 for the preceding 12 months.  In all, the company has grown to have 150 of its HYDRA systems deployed throughout the US and Canada, collectively controlling about 1,250 daily charging sessions. Its clientele ranges from private companies to government agencies.

A Tough Market Poised for Change

While Liberty Access Technologies has the ability to focus on other clients as well, it believes the best bet for it at this moment is to deploy its HYDRA system in a manner that allows it to cater specifically to electric school buses and the companies that own them.  This market is larger than most people might expect. In the US alone, according to Student Transportation of America, which itself owns over 13,500 school buses that it operates through the US and Canada, there’s an estimated 500,000 school buses.  This is more than 5 times the number of city buses in the country and every year they make around 10 billion trips transporting 25 million American students.  A full 66% of these buses are owned and operated by individual school districts while the rest are controlled by third parties working with school districts on some form of contract basis.

In an era when education spending is a contentious topic, an emphasis on an expensive vehicle that operates solely as a cost center for the schools in question may seem like an unwise strategy, particularly when you consider that the upfront cost of an electric school bus is, on average, $120,000 more than a diesel fuel one.  That said, while the upfront costs are materially higher per-unit, the lifetime costs are forecasted to be lower.  According to one source, between fuel savings and reduced maintenance costs, school bus owners could save, on average, between $170,000 and $240,000 per bus in the 15 to 20 years that they are operational.  Another source put the potential savings another way: due to lower operating and maintenance costs associated with electric buses, the annualized spending required of school districts could be up to 60% lower than sticking with the traditional buses.  Not only are long-term costs forecasted to be lower, there are non-monetary benefits to this transition as well.  According to Economics of Education Review, replacing diesel buses with electric ones has had positive impacts on the respiratory health and test scores of the students riding said vehicles.

Recognizing the opportunities and acknowledging that the higher costs today are worth the lower costs over the lifetime of the buses, some states have begun to make the transition from diesel fuel to electric mandatory.  Undoubtedly the biggest advocate recently has proven to be California. Earlier this year, the California Energy Commission approved $70 million in funding to go toward its electric school bus purchase plans.  The goal with this funding is to help districts acquire, in aggregate, at least 200 buses state-wide.  This brings total funding for electric bus purchases up to nearly $90 million, plus the state has set aside a further $13 million to be allocated toward charging infrastructure.  This appears to be on top of other initiatives, like a $1.7 million pilot program in San Diego to connect 10 retrofitted electric school buses with the state’s electrical grid.  The state also was home to a vehicle-to-grid demonstration led by the Clinton Global Initiative that saw 6 school buses connected to California’s grid to test the value of energy that could be generated per year in the buses’ off time.  The result: $6,100 per unit.

In other states, like Virginia, private industry has decided to step in.  Earlier this year, Dominion Energy announced an initiative aimed at turning 100% of the state’s diesel school buses into electric ones by 2030.  With $13.5 million in hand, the company will begin with 50 buses first, then move up to 1,050 by 2025.  By 2030, more than 2,000 school buses (the estimated number in Virginia) will have been deployed. Of course, the company is not doing this solely out of the goodness of its own heart; there is a financial incentive to this initiative.  According to the firm, every 1,000 electric school buses it places on the market, when hooked up to the state’s electrical grid, should provide the energy needs equivalent to 10,000 homes. Other states, like Michigan, Vermont, Minnesota, and Arizona, have allocated proceeds from their portions of the Volkswagen diesel energy scandal settlement to acquiring new buses, with Michigan in particular allocating $3 million toward grants covering up to 70% of the costs associated with bus purchases and charging infrastructure. 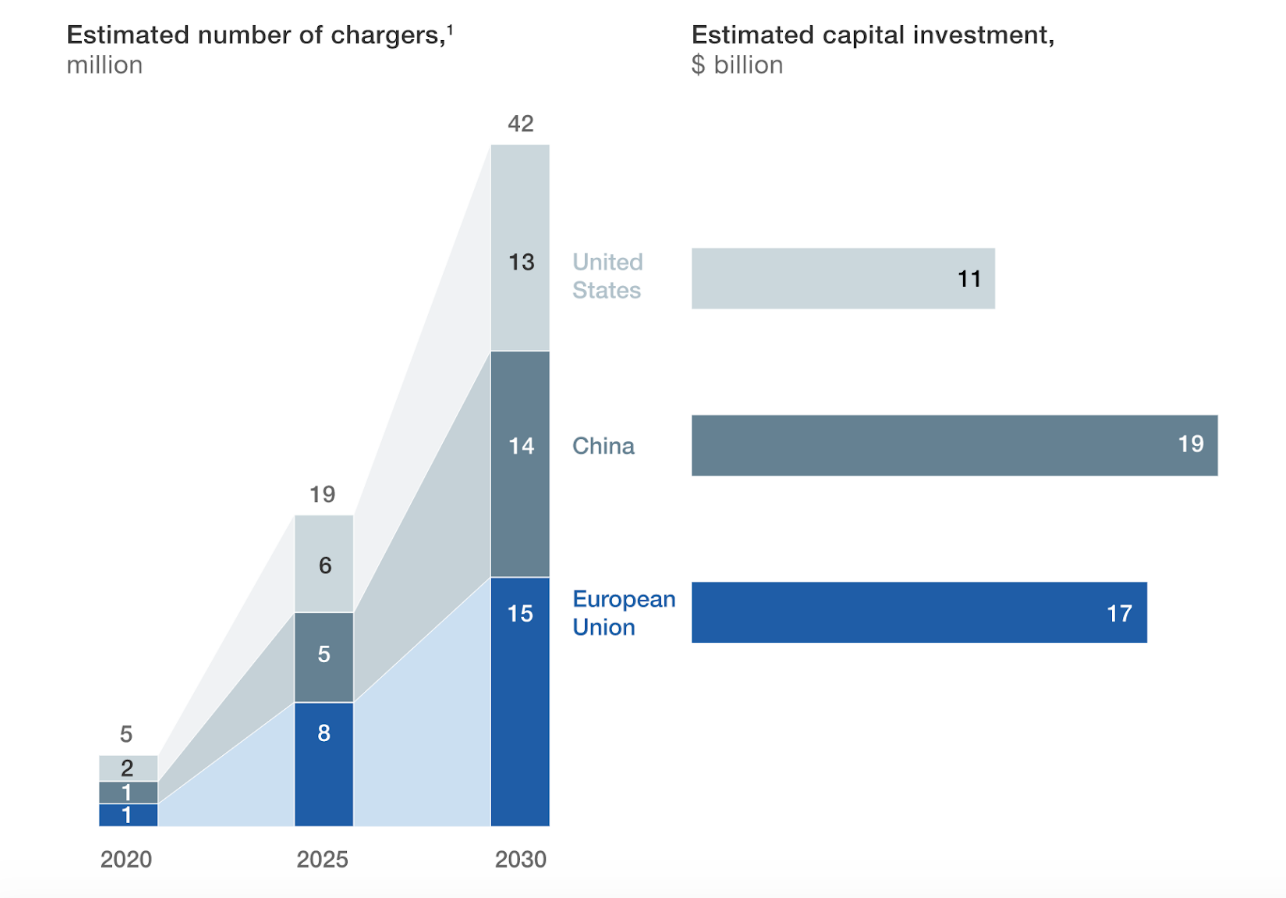 On a broader scale, the amounts being spent by states are only a small portion of the capital that will be required in this space over the next several years.  According to one source, by 2030, it’s forecasted that 120 million electric vehicles will be split between the US, China, and the EU.  In the US, that number should be about 18 million, which though small, is a 9-fold increase over the 2 million that we should have on the market by the end of next year.  To meet this demand, the US will require an estimated 13 million chargers and capital investment of around $11 billion.

In terms of deal structure, the raise conducted by Liberty Access Technologies is as simple as they get.  According to the filings provided by management through the SEC’s EDGAR Database, the firm is seeking to raise between $10,000 and $107,000 at a pre-money valuation of $19.2 million.  Investors can buy shares at a price of $0.40 apiece but must commit at least $300 to the deal. All units issued are common. One negative about the raise is that it’s so small, even if the maximum amount is subscribed to, that it’s hard to imagine it doing much more than covering another year’s losses instead of giving the entity the fuel it might need to truly grow.

An Eye On Management

Though Liberty Access Technologies has an extensive team, the core member of the group is Chris Outwater, the business’s founder, CEO and Director.  In the past, he worked as a consultant for Disney Imagineering and he has technology and management experience leading automotive and technology companies such as Ford Motor Company and General Motors. He is the inventor or co-inventor on 18 patents, and he worked to develop the original concept for the HYDRA and continues to manage ongoing patent development, hardware and back office operations.

Working with Outwater is Michael Keane, the company’s CTO, and Tim Hylas, its CFO.  Keane fashions himself as a serial entrepreneur who has “created a number of innovative web-based service startups including RealtyTrac, Inc ($50mm annual revenue)”. He has also led technology development projects for clients ranging from Castle Rock Entertainment to Sony to Bausch & Lomb, and even BAE Aerospace.  His primary role at Liberty Access Technologies is to service the company’s back office suite of tools and reports, and to handle the integration of those technologies with a variety of utilities and other energy service product providers. Hylas has over 35 years of accounting experience as controller for businesses ranging from non-profits to large mortgage companies, wine businesses and manufacturing companies of various sizes.

The Rating: Deal To Watch

After a careful review, the team at KingsCrowd has rated Liberty Access Technologies a Deal To Watch.  The revenue generated by the firm in 2018, as well as its increase over 2017, and some of its other financial results are good for a startup, even one of its size.  The company appears to be nearing the point of profitability, which is a major plus. Perhaps equally important is the fact that the market the company operates in appears to be showing signs of taking off, at least in several key states.  With the need for electric school buses on the rise and infrastructure required to meet their servicing needs, particularly outside of the public arena, Liberty Access Technologies is in a nice place at the moment.

This does not mean, however, that the company is without risks.  Despite significant sales, the firm does still generate a net loss, plus at the end of last year it had short-term debt of $210,593 (short-term being defined as due within one year of the statement date).  Add to this the fact that the current raise really is just a drop in the bucket in the grand scheme of things relative to the size of the business and the capital it will likely require to grow in the future, and the prospect of dilution is always on the table.  Competitive pressures are always an area of concern too, but given the presence it has established with its existing clientele, this is less of an issue than with earlier-stage startups. Even taking all of these factors into account, the good appears to outweigh the bad, but not by enough to make this considered anything better than a Deal To Watch.

The biotech company is focused on novel therapeutic alternatives to reduce post-surgical infections. The procedures of Covira Surgical leverage the…

The Triton, the company’s flagship wave energy converter, has undergone years of concept development, product validation, and laboratory and small-scale…

It specializes in delivering technology solutions and services for managing digital risks through information protection, public safety, resilience management, and…