Loop, with a valuation cap of $8.5 million, is raising funds on SeedInvest. The platform of Loop is connecting families and bringing them closer through better communication channels. The content on Loop app is divided into channels where the users can invite family members or friends to participate in various discussions. Loop was founded by Brian Gannon, Sital Mistry, and Ethan Ballweber. The proceeds of the current crowdfunding round, with a round size of $3.25 million, will be used for Android app development, marketing, hardware expenses, software engineering, subscription service, and customer service. Loop has already generated more than $1 million in lifetime revenues and was sold out in about four weeks through Best Buy online and offline stores.
Log in or create a free account today to gain access to KingsCrowd analytics.

The team at Loop has been selected as a “Top Deal” by KingsCrowd. This distinction is reserved for deals selected into the top 10% of our due diligence funnel. If you have questions regarding our deal diligence and selection methodology please reach out to hello@kingscrowd.com.

This is a reiteration of our Top Deal rating earlier this year.

Loop is a hardware-and-software integrated IoT (Internet of Things) platform built for families in a world of ever-greater connectivity, but also aimed at addressing concerns surrounding privacy.  The company’s hardware setup acts as a focal point for content created and shared through its app, and through the mixture of hardware sales and monthly subscription packages, the management team at Loop believes the business can become a valuable enterprise akin to Snapchat, Slack, or Nextdoor.

We live in an ever-more connected world, but even in that environment families struggle to stay connected.  Current social media platforms are fragmented or disconnected altogether, plus as Facebook and its own data issues have made apparent in recent years, privacy concerns abound.

Though it may seem counterintuitive to argue that the world is fragmented, one need only look at the multitude of social media platforms that exist and how disparate they are from one another.  Some users may only be accessible by Facebook, while others may be on Twitter, and others still on Snapchat or some other independent platform. This makes establishing and keeping up with meaningful relationships a challenge. 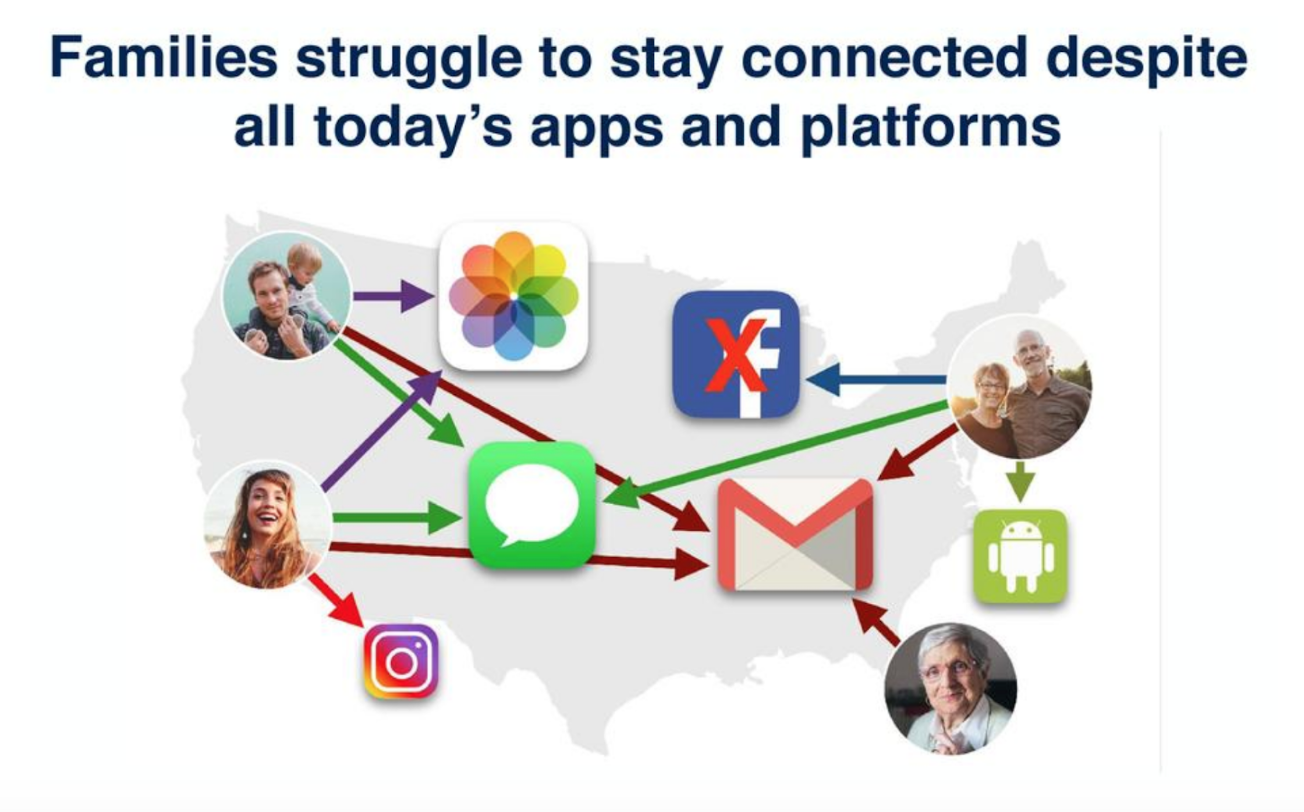 In addition to this, there’s the issue of what, exactly, you want people to see.  While most social platforms offer filtering options, even that may not always be enough to meet a user’s needs for the most intimate type of relationship: family.  Keeping a specialized network open solely for family and being able to curate and share content centered around those vital relationships is something that current social media platforms lack. 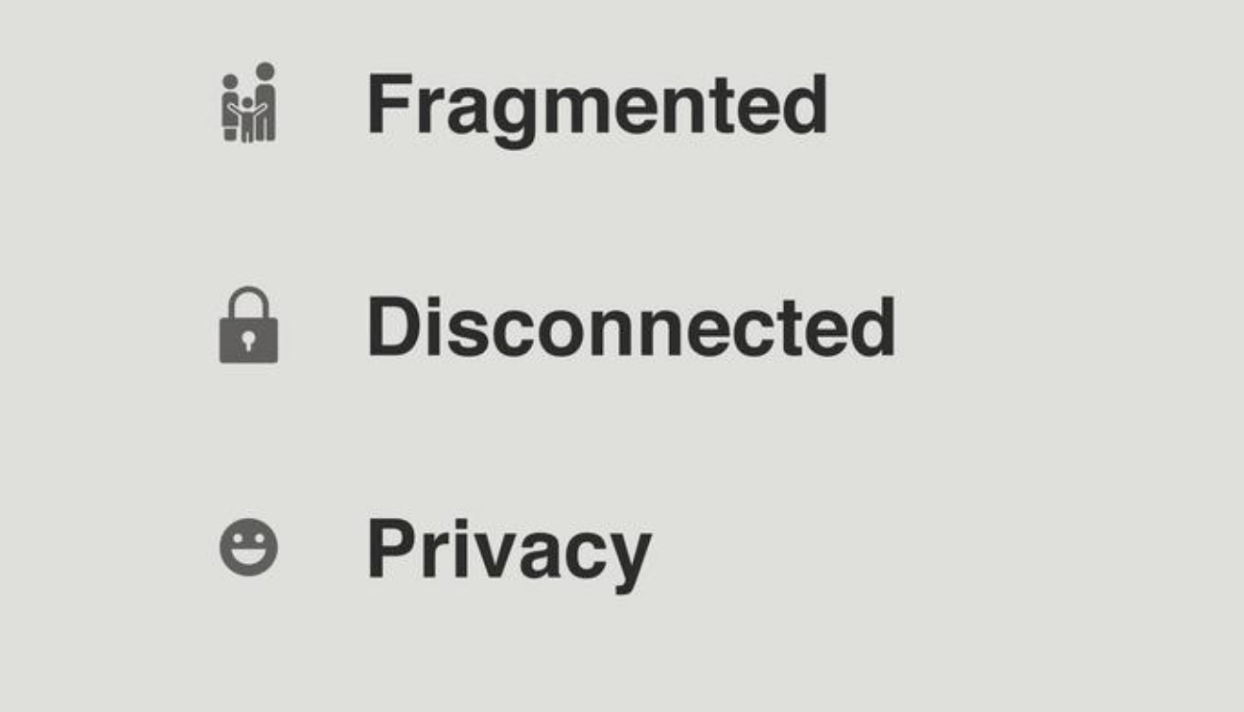 To address these concerns, CEO and founder Brian Gannon, created Loop.  Aimed at strengthening family ties, the company has developed a hardware display that it sells that is capable of showing any information shared with it through the company’s app.  In a hypothetical scenario, a parent might take a photo or video of their son or daughter riding a bike and, with the touch of a button, send that photo or video straight to any Loop device(s) that they want, including cousins, grandparents, siblings, or even friends.  The device sorts the content into different channels and also allows users to engage with one another via videochat. It also keeps a digital record of all the content shared through it. 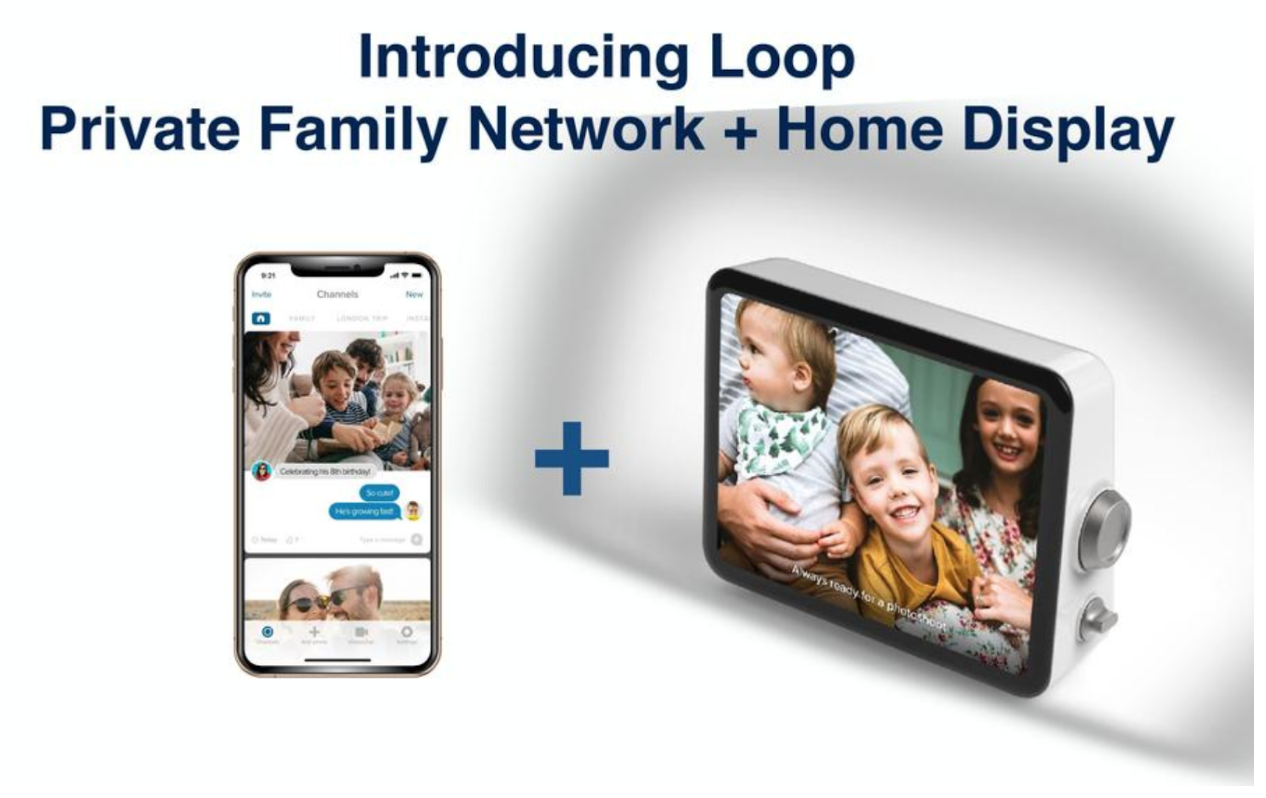 Users do not have to buy the hardware if they don’t want to.  Instead, they can use the app, starting for free, and curate and share content through it with those they are connected with.  That said, the results of the company have, so far, been encouraging. The average number of units per order it has received so far are 2.6, and the average number of app downloads per Loop device has been 2.5.  Within three months of a sale being made, the retention rate of its customers has exceeded 70%, with an average of 3 family connections per app, and 33.7% of users utilize the app 2 or more days per week.

As of this time, the company is currently selling its hardware displays at a price of $225 apiece.  This is a big part of the company’s revenue strategy, but it’s not the only part. While the app is free to use, the firm intends to offer unlimited data storage and premium features at a price of $3 per month, so even if the company eventually hits a limit as to the number of units sold, it can still generate regular cash flows.  In one test, the company sold its units through Best Buy, both online and in-store. In a span of four weeks, the company sold out, but it did not specify how many units were sold in that timeframe. 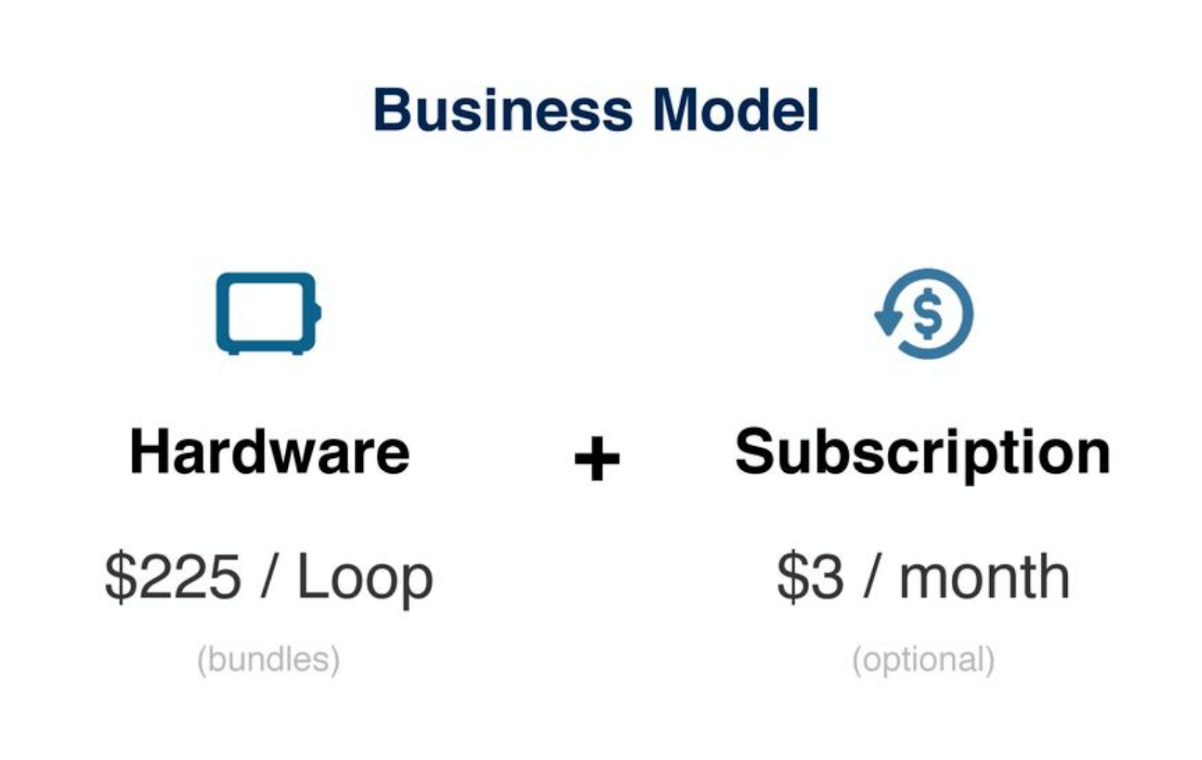 At this early stage, investors should expect Loop to generate a net loss for the business.  That’s the story for the first few years of almost every startup’s life. In 2017, for instance, its net loss was $2.31 million, while in 2018 it had narrowed to a loss of $0.96 million.  This is great news to see, but one discouraging piece of data is the amount of revenue generated by the firm.  It is possible that sales can fluctuate, even from year-to-year, based on the timing of sales, and perhaps this is the reason why, but from 2017 to 2018 revenue declined from $407,340 to $357,011.  In all for the company, since inception, revenue has exceeded $1 million, but to see annual sales fall is discouraging and requires more context from management.

It’s really difficult to talk about a specific market here because the company’s product loosely fits so many different definitions.  To start with, we can look at household data across the US, which management itself used as an illustration of how many customers it might possibly capture.  Back in 1940, according to the US Census Bureau, there were 34,949 million households across the nation.  In 2018, that has increased to 127,586 million, an annualized increase of 1.67%.  By 2,100, it’s estimated that there will be around 434 million people in the US, up from the 327.2 million seen last year, so assuming the same average household size, this should translate to around 169,230 million households by that timeframe.

Another lens to look at this market through relates to a focus not so much on the hardware, but on the app and the possible subscription revenue that can be generated from it.  In 2018 alone, it was estimated that there were 194 billion app downloads worldwide.  This was up from 178 billion just one year earlier. Of the apps downloaded, 3.3% involved paid subscriptions, up from 2.5% in 2017.  Not only are we seeing the number of apps downloaded increase, then, we are seeing the individuals downloading them become more willing to pay.

In fact, the actual subscription-based e-commerce market has been exploding in size, rising more than 100% per annum for the past five years and showing no signs of halting its growth.  55% of subscriptions paid for are curation-based and the most dominant driver for demand in these types of apps happened to be the ability of the apps in question to continue producing a series of personalized, high-quality experiences.  So long as Loop can deliver on this front, it should be able to build up a strong user base.

The last lens to look at this through relates to the broader IoT market.  IoT is currently experiencing a massive upside trend. By 2025, for instance, it’s believed that there will be 11.4 billion consumer IoT devices across the globe, and in the $1.7 trillion IoT market that the world is supposed to have by 2020, consumer spending in the space should rise to $236 billion, up from only $72 billion in 2015.  If the consumer side of the equation is anything like the sum of the consumer and industrial sides, about 35% of the market will consist of hardware sales, 12% will consist of XaaS, and 22% will consist of connectivity revenue streams.

In prior years, the IoT space has done really well, both for companies and entrepreneurs alike.  Shark Tank reject Ring, for instance, was sold off to Amazon in 2018 for $1 billion and, in a lot of ways, the Loop device isn’t too different from that.  In fact, the company’s display might be seen by some companies as a foundation for connecting other consumer-based IoT and smart-home devices.  Another comparable might be Amazon’s Alexa. As of early this year, total Alexa-enabled devices on the market exceeded 100 million.  Any sort of scale even remotely close to this generated by Loop would make it worth a fortune.

At this time, the management team at Loop is trying to raise $3.25 million ($1.07 million through the crowdfunding portal), with a minimum target of half of that.  In exchange for the investment, the company will be giving to investors a convertible note that bears a 3% annual interest rate and that will convert at a 10% discount to the next round’s valuation, subject to a valuation cap of $8.5 million.  The term of the note is 24 months and if there is a conversion, it will be done in exchange for preferred units that may or may not have any voting rights (management has said they do not know if they will have them or not). Upon a full raise, the company intends to use half of the net proceeds for marketing activities, and a further 18% for software engineering.  This compares to the 25% to 25% split between those two categories if the company raises only the bare minimum.

Private deals are incredibly difficult to assess because of a lack of good comparables.  This is true especially of a company like Loop. What we can say is that the business model looks awfully appealing and between Ring, Alexa-enabled devices, and other IoT offerings, it is encouraging to see a concept as interesting as Loop.  Add to this the fact that the current deal is based on a company that, since inception, has done over $1 million in sales and that sold out at Best Buy rapidly, and the offer seems to make a lot of sense for prospective investors.

An Eye On Management

The head of the Loop team at this time is Brian Gannon, the company’s founder and CEO.  After graduating from MIT with a degree in Electrical Engineering and his MBA, Gannon worked in the field of computer chip design at Fujitsu, then worked at Boston Consulting Group as a management consultant.  During this time at Maxim Integrated, he served as a product manager who, on the whole, oversaw 30 different product launches that collectively shipped over 400 million units.

Another key figure at Loop is its Head of Software, Sital Mistry.  After his time at UC Berkeley, he performed software engineering function at Hiplogic, and he also served in the role of software engineering management at Zynga where he ran the team responsible for Words with Friends.  Also at Loop is Ethan Ballweber, the company’s Head of Design. Having graduated from RISD, one of the world’s top design schools, he landed a position at Altitude Design where he worked on Google’s smartwatch, among other projects.

We are assigning Loop our coveted Top Deal Rating.

We do not make this decision lightly. There is a strong possibility that the need to purchase Loop’s high-priced hardware could be a barrier for many consumers and investors should keep this in mind. That said, we think the company is worth the risk. The market potential is just too big and it’s also not impossible that the hardware becomes a massive plus in an internet-of-things (IoT) fueled world. There is also the added bonus that  management can use the platform as a foundation for other smart-home services down the road.