When deciding to invest in a startup, the company’s valuation often plays a major role. The promise of startup investing comes from getting in early – while companies are still growing and their value is increasing. However, there is a tricky balance that startups must strike when setting their valuations in online funding rounds.  A too low valuation might be attractive to investors – but it can take away significant ownership from startup founders. A too high valuation can discourage investors because there could be less opportunity for an attractive return.

We saw a few weeks ago that the highest valued startups raising online have lower valuations than the highest valued startups raising offline. In this Chart of the Week, we look at how startup valuations break down between Regulation Crowdfunding (Reg CF) and Regulation A (Reg A) rounds. We examined more than 2,700 funding rounds in total. It is worth noting that there are far fewer Reg A rounds overall, and only 123 Reg A rounds were included in the data for this chart. 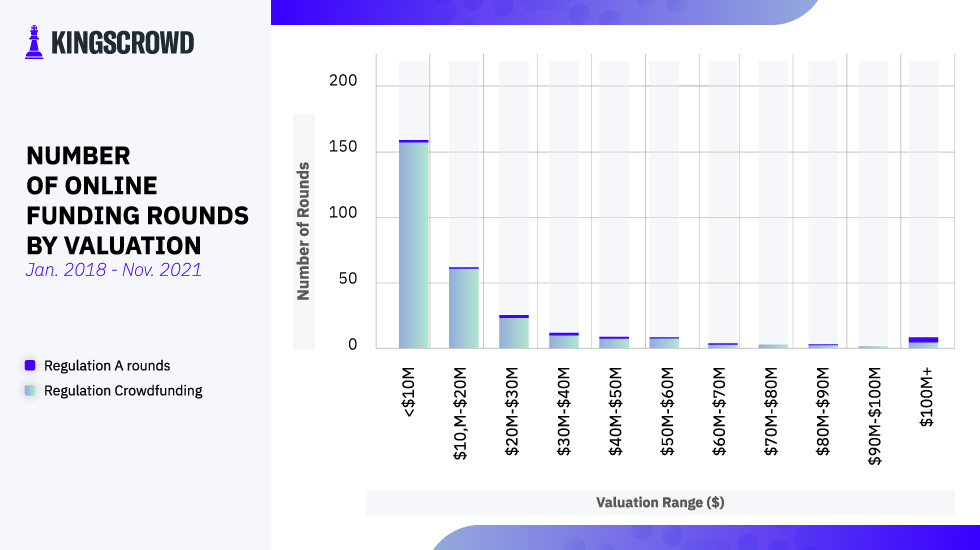 Investors looking for startups with low valuations – and thus the most potential for large returns – are well-served by the Reg CF market. Many venture capitalists (VCs) need the startups they invest in to become unicorns (companies valued at $1 billion or more) in order to see significant returns. However, investors in the online private market have an advantage over VCs. If they are investing when a company is valued at $10 million or $20 million, then an exit at $300 million (for example) means a return of 15x to 30x. And it’s much easier for companies to reach $300 million than $1 billion.

On this episode Chris Lustrino is joined by Blake Janover,… ...

The newest 35 equity crowdfunding raises from across 20+ platforms. ...

A list of the latest equity crowdfunding campaigns from across… ...