Market Correction in the Public and Private Markets - KingsCrowd Skip to content
Become an owner of KingsCrowd.
Invest Today!

Market Correction in the Public and Private Markets

Like most areas of business or the economy, venture capital (VC) goes through cycles. It’s typical to see a drop in the VC market every 10 to 15 years as startup valuations are brought back down to realistic levels after being elevated. The most recent drop, however, is hitting the private market particularly hard. For example, Klarna’s recent valuation was $6.7 billion — down 85% from its previous $46 billion. And it’s not the only big name company that’s had its valuation slashed. Instacart’s valuation is down 40%, while BlockFi’s value has reportedly been cut by 67%.

It’s also no secret that the public markets have been struggling this year. So with both traditional VC and the stock markets dropping, how are the online private markets faring? 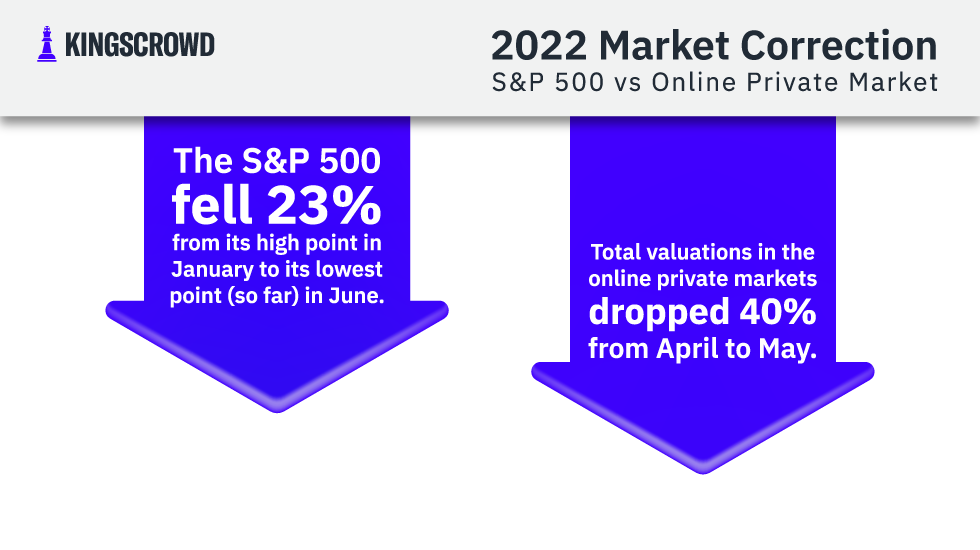 It turns out that the online private market was hit harder than the public market. While the S&P 500 fell 23% from January to June, the total valuations in the online private market dropped 40% in just a month. There could be many reasons for this dramatic drop. High inflation rates, high interest rates, fear of recession, and lower business activity are all valid reasons to slow down startup investing. Slower investing often results in startups lowering their valuations in an attempt to re-attract investors. The market could also be affected by recent international events such as Russia’s invasion of Ukraine and the diplomatic tension with China.

Some may see this drop as a setback, but many others would consider it a market correction. This would be the first major correction in the online private market since its advent in 2016. And seeing valuations come down to more realistic levels is a boon for investors. While investing in what seems to be a bear market can be mentally difficult, it can also yield excellent opportunities for outsized returns. Lower valuations mean better deals for startup investors, so now is a great time to invest.

Ahmad comes to KingsCrowd with the perfect blend of venture capital and data science experience. He holds an MBA, is a Kauffman Fellow and has spent eight years working in venture capital, with stops at N2V, Leap Ventures, and ArzanVC. He also spent three years at Carta, a leader in cap table management and private equity technology. In his free time, he runs his own VC and data science-focused blog: VCpreneur.com where he entertains and educates thousands of readers.

A comprehensive list of the latest startup deals from the… ...

KingsCrowd is offering accredited investors the opportunity to invest in… ...