Nemucore Medical Innovations is here to bring you the future of cancer care. They’re developing a new type of targeted therapy that “...relies on knowledge from an RNA-based diagnostic instead of more traditional DNA-based diagnostics to determine if a patient with cancer is a candidate for our targeted therapy.” They believe that this type of diagnostic will help unlock targeted therapies for the 70% of cancer patients who do not have “druggable” genetic mutations in their DNA. So far, they’ve raised $7M from foundation grants and the National Cancer Institute; they have over 57 investors; and leading experts at Memorial Sloan Kettering and Moffitt Cancer Centers are set to perform their clinical trial. Plus, their leadership team has over 100 years of biopharmaceutical experience. Their goal, with this campaign, is to “cure AML together and open a new future of cancer care.”
Create a free account today to gain access to KingsCrowd analytics.

At time of publication, August 16th, Nemucore had raised $74.3K

The Nemucore team has been selected as a “Deal To Watch” by KingsCrowd. This distinction is reserved for deals selected into the top 10-20% of our deal diligence funnel. If you have questions regarding our deal diligence and selection methodology please reach out to hello@kingscrowd.com

To simplify, the Nemucore team is developing a treatment that can have significant treatment benefits for certain patients with AML. Better yet, Nemucore can identify whether or not the treatment is a good fit for the patient through its RNA diagnostic test. The treatment is entering phase 1b/2 clinical trials, which means it is very early but it has shown promise to date.

To briefly get into the science we spoke with Sol Reyna, Ph.D. and Portfolio Analytics Manager at Sanofi. After her review she was able to tell us that, “in publications, it appears that high Aurora B kinase is correlated with AML and the reduction of it in animals, which provides signals that NMI-900 can help to improve outcomes for patients.”

Additionally, Nemucore partnered with the Medical Prognosis Institute (MPI) to employ the MPI validated Drug Response Predictor to identify patients that will respond well to NMI-900.

“MPI appears to have de-risked development of the CDx given the number of approved drugs that have used it’s platform,” says Sol Reyna, Ph. D.

Overall, as it pertains to the actual pharmaceutical asset, Nemucore seems to have a promising early stage asset that has shown signals of providing significant value to a subset of patients impacted by AML, which is a highly deadly disease.

Acute Myeloid Leukemia (AML) is a type of leukemia, which is a cancer of the blood cells and bone marrow. Cells that would otherwise go on to become red blood cells, platelets, and special white blood cells are unable to do so.

Instead these cells form leukemic blast, which don’t operate normally leading to an inability for the body to get the oxygen it needs or fight infections as red and w hite blood cells are no longer produced in the right quantities.

It’s a disease that carries a 5 year survival rate of 26%. Unfortunately, few medical treatments have been approved to help improve treatment courses for AML patients. The reality is the last set of treatments for AML were, “approved in ~1973 for AML and it was not until 2017 that another drug was approved to treat AML,” says Tim Coleman, CEO of Nemucore.

Perhaps the reason for so few new treatments is that the population of patients affected by AML is very small.

The Disease Incidence (aka Market Size)

In 2018, the American Cancer Society estimates the incidence of acute myeloid leukemia will be 19,520, meaning there will be almost 20K new cases of AML, mostly amongst adults. Of that group, about 10,670 of them will not make it through the year.

Small disease populations like that seen in AML started receiving orphan disease designations by the FDA beginning in 1983, which is reserved for diseases / disorders that affect fewer than 200K patients in the U.S.

The idea was to encourage investment in developing treatments for small disease populations with government grants, tax benefits and exclusive rights to market products for longer periods of time.

More encouraging from a capitalist perspective is that companies that have succeeded in recent years in treating extremely rare diseases have commanded extremely high premium prices.

As you can see in the table below drugs such as Sarepta’s Eteplirsen and BioMarin’s Brineura drug price in the $300K to $700K price point.

With these recent successes for orphan indications, an enhanced focus on rare diseases is coming from small and big pharma alike. For these reasons, we actually think Nemucore is pursuing an extremely attractive market opportunity. 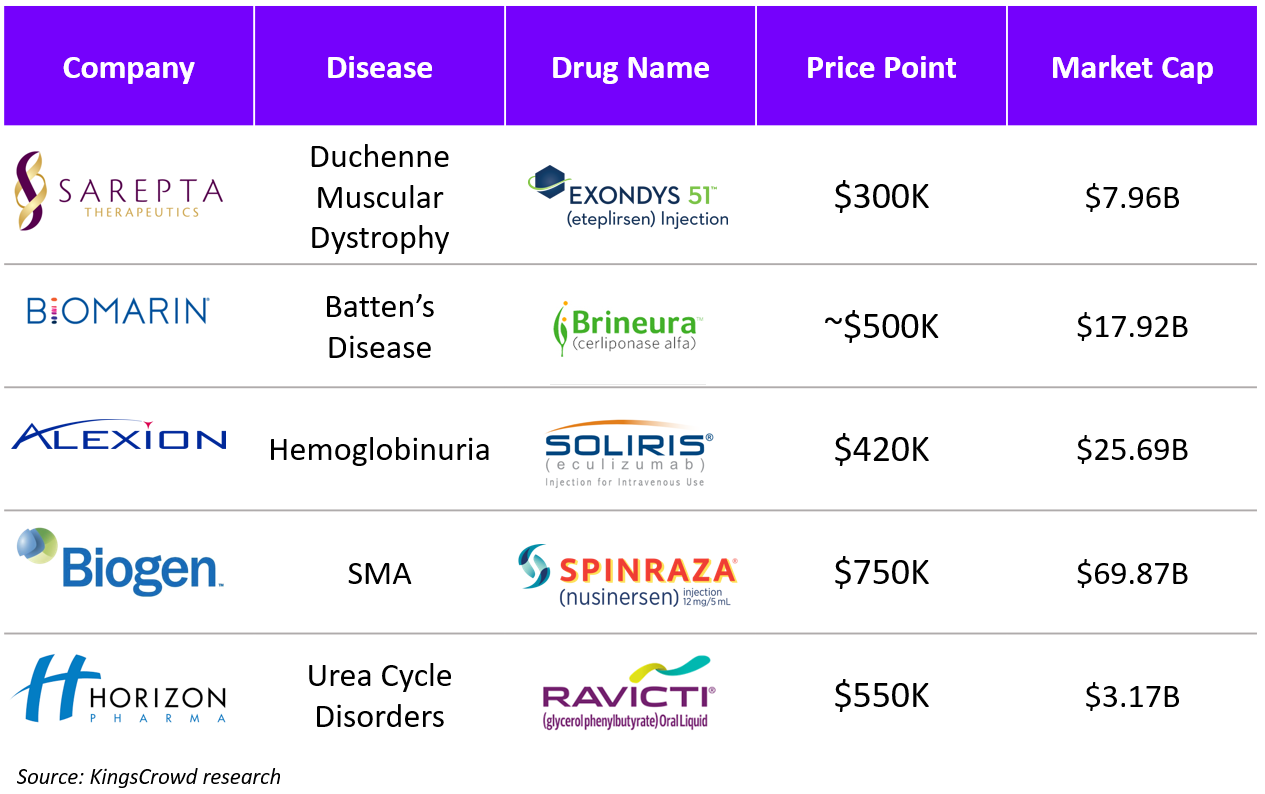 As Nemucore advances NMI-900 forward, one thing you need to consider is who else is developing treatments to pursue the AML indication.

In speaking with Sol Reyna, Ph.D., the competition coming from a couple of big pharma’s is reduced by the fact that, “Nemucore seems to be the only one approaching the trial with a potential companion diagnostic, which provides differentiation.” 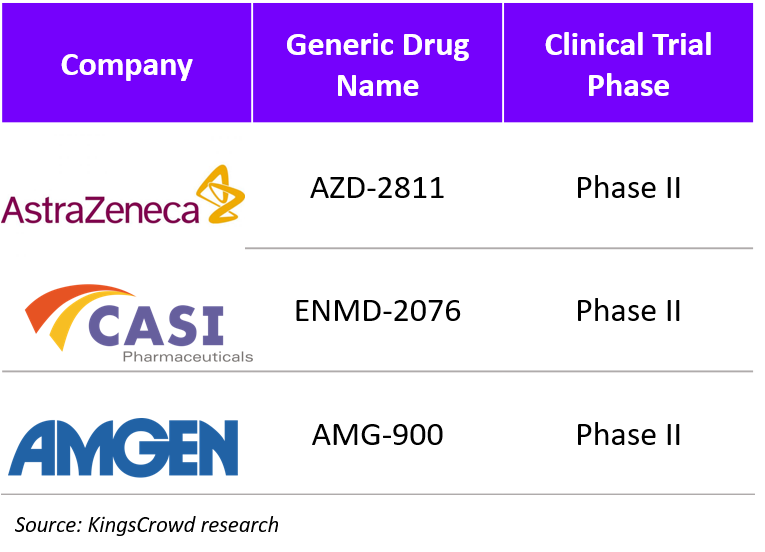 Additionally, there has been 3 programs utilizing the Aurora B kinase inhibitor that have ceased development in the past from Astra Zeneca, and Millenium (Takeda), which both were discontinued for pipeline re-prioritization.

Though there is always a risk that big pharma can leap over small bio-techs the more likely reality is if Nemucore begins to show real progress in clinical trials, one of the organizations will look to acquire it.

There are several points we want to call out as you consider investment in Nemucore. These are meant only to inform you of some of the risks you take in investing in an early stage bio-tech like Nemucore.

First off, Nemucore has completed one phase I trial in the UK, but still has to go through phase I through III trials here in the United States. In a study performed by the Biotechnology Innovation Organization between 2016 and 2015, it was found that only 5.1% of all oncology drugs made it from phase I to approval.

This is the lowest probability of being approved amongst all disease indications.

Nonetheless, we do think that Nemucore has showed promise and with the opportunity to be a $5B company or more based on the Ariad acquisition we mentioned above, the risk adjusted value would still be $250M, well above the current $20M valuation cap.

Other notes worth calling out is that Nemucore NMI-900 will most likely be a second line treatment. “The initial addressable population for NMI-900 will be second line non-responders and potentially first line patients who are positive on the diagnostic test,” says Sol Reyna, Ph.D.

This means that of the ~20K patients diagnosed with AML, most of them will first be treated with the more affordable first line standard of care.

Only patients who don’t respond to the first treatment type will then likely be tested for NMI-900 sensitivity. All of this is to say that the addressable population may ultimately fall to 3-5K patients rather than 10 or 20K. To be clear at a similar price point to other ultra-orphan drugs (~$300K), this would still be a ~$1B+ revenue opportunity.

The Recommendation: Deal To Watch

Opportunities to invest in innovative oncology drugs like Nemucore’s NMI-900 present a chance to invest in a company with tremendous upside. As we have mentioned above, bio-techs with decent initial clinical trial results can go on to command outsized valuations. This is entirely different world from traditional tech with its own rules.

We think with experienced management, a promising drug and companion diagnostic, Nemucore will be a valuable asset that can support a standalone multi-billion public company or as a major acquisition by big pharma down the road.

However, as we have noted above there is also the chance that Nemucore fails to obtain FDA approval, in which case the asset would be worth little. For these reasons, we think Nemucore is an investment that warrants investment, but the amount invested should reflect the risk-reward curve we have called out.

Thank you for your vote on Nemucore Medical Innovations on Wefunder

Thank you for your vote on Nemucore Medical Innovations on Wefunder