Nori is on a mission to reverse climate change.

Nori is a blockchain-based marketplace for reversing climate chain. They remove carbon dioxide from the atmosphere by using NORI tokens as a medium of exchange for Carbon Removal Certificates (CRCs). So far, they’ve been featured in Fast Company, GreenBiz, GeekWire, New Food Economy, CleanTechnica, Virgin Unite, and Sea Change Radio. Their podcast has over 35 episodes and is the leading podcast on carbon removal. Plus, the team has deep experience; Nori’s founders and advisors have “...more combined experience in carbon removal than any other team on earth, having developed cutting edge technologies and founded key initiatives in the space.”
Create a free account today to gain access to KingsCrowd analytics.

Nori has been selected as a “Deal To Watch” by KingsCrowd. This distinction is reserved for deals selected into the top 10-20% of our deal diligence funnel. If you have questions regarding our deal diligence and selection methodology please reach out to hello@kingscrowd.com.

One of the largest issues that we all have to face today is the results of climate change and the decay of our planet due to the excessive amount of carbon dioxide accumulating in our atmosphere, land, and oceans.

Human greenhouse gas emissions, including methane and carbon dioxide, have already warmed our planet more than 1 degree Celsius compared to pre-industrial levels. This has resulted in visible changes in weather patterns, agriculture, sea levels, and so much more.

Since the industrial revolution, carbon emissions have only been increasing exponentially – so far, we have emitted about 40 billion tons of carbon in addition to the carbon that has already been accumulated.

While 55% of the carbon we emit is eliminated by land plants and the ocean, 20% of the remaining carbon can linger in our atmosphere for thousands of years negatively impacting our planet and all the living organisms on it, including us.

While certain amounts of carbon dioxide are necessary in our environment to help regulate Earth’s temperature, this excessive build up of carbon over the years is causing the ocean’s acidity levels to rise, nutrients to disappear, plants and trees to be more prone to drying and catching on fire, and so many more detrimental effects.

According to scientists, Earth’s temperature will increase at least another 0.6 degrees Celsius with the CO2 already present in our atmosphere, not to mention the fact that we will continue to emit more carbon into it, further destroying our planet.

Many realize the pressing nature of this issue and the short window of time we have to actually act and make a difference. It is common knowledge in the science community that we need to remove 15 billion tons of CO2 from the atmosphere every year by the end of the century in order to prevent global warming from exceeding 2 degrees Celsius.

There have been attempts to meet this goal with pledges from different countries as well as the Paris Climate Agreement and the technology to begin removing carbon does exist – the problem boils down to the fact that it is not happening at a large enough scale to have an impact.

Nori is on a mission to reverse climate change. By creating a way for anyone in the world to pay to remove excess carbon dioxide in the atmosphere, their model shows promise of not only expediting the process, but also creating a financial infrastructure that could incentivize carbon removal at a larger scale.

Nori uses blockchain technology, creating asset-backed tokens, each representing one tonne of CO2 emissions. These tokens can be bought and sold on Nori’s credit marketplace, which not only acts as third party verification, but also connects buyers and sellers of credits in a single marketplace. 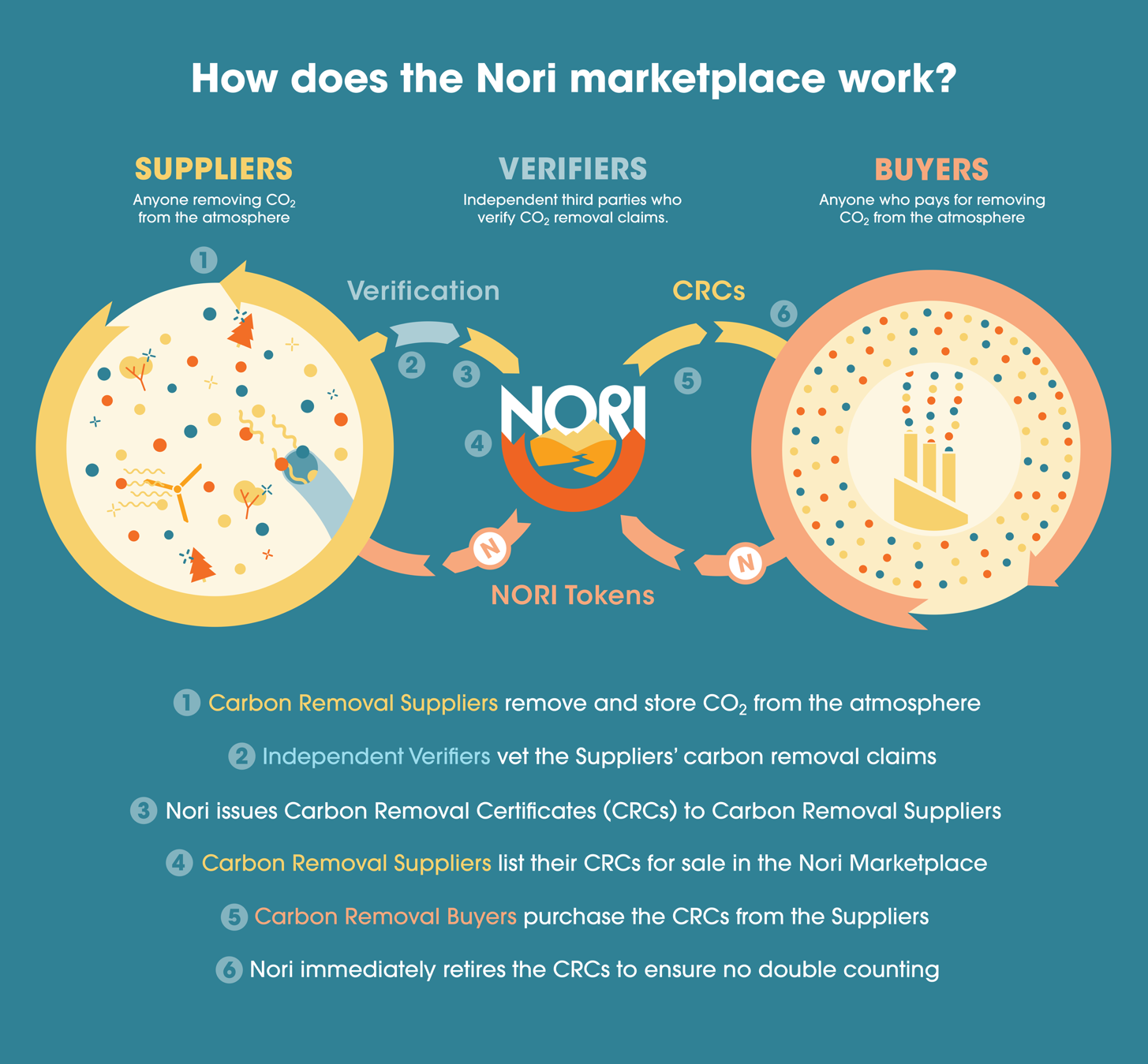 Nori’s business model is based on the premise that the increased liquidity and value of carbon credits, granted by high participation from buyers and sellers as well as from its marketplace, can better incentivize companies to invest in reducing its carbon footprint and reward companies who are already responsible with their emissions.

While the company hopes to expand its token usage into many different forms of carbon removal, Nori plans on focusing its initial market penetration on the agricultural industry’s willingness to participate in its program.

Fortunately, the agricultural industry already has a few incentives to join – CO2 trapping practices like no-till, cover cropping, and crop rotations are also conducive to lowering water consumption/wastage. Farmers who adopt/have adopted these practices may be highly incentivized to participate in Nori’s marketplace.

Tradable carbon credits as a concept have been around since the Kyoto protocol in 1970, and consumer-friendly carbon-offset companies have become more and more popular. However, current methods of involving individuals and businesses in carbon offset programs are usually one dimensional, with buyers purchasing offsets from websites without knowing who and how their offsets are being generated.

This is where blockchain technology gives Nori the advantage over traditional offsets. By creating a marketplace, Nori is effectively eliminating the middleman, connecting those who offset CO2 and those who would like to offset their CO2 directly.

Blockchain is easily transferable, trackable, and cannot be easily manipulated or altered. This introduces a level of personalization to the carbon credit market, and allows for increased liquidity.

Even more Nori’s model for its token usage is much better at incentivizing all businesses to act responsibly. Traditional credit markets are better at helping companies that are exclusively geared towards constructing new solutions for reducing carbon footprints, like planting trees or supporting farmers who are unwilling to sell their land to deforesters.

While these organizations whose only purpose is to reduce CO2 are important, Nori is able to access a different market – companies whose primary purpose is not to reduce CO2. By putting a price on one tonne of CO2, all companies that emit CO2 are incentivized to rethink their strategy regarding their emissions and potentially invest in green technologies.

Nori’s business model seems to be well positioned for success – its management team is passionate, driven, and most importantly, very knowledgeable about the CO2 offset market. This has enabled them to find effective entry points into the marketplace like it’s focus on farmers who implement sustainable farming practices.

However, acceptance into the larger market may be difficult. In states other than California that have not passed cap-and-trade regulations, companies may not have enough incentive to buy tokens to offset their CO2 emissions. Smaller companies that are more concerned with their own growth, and aren’t required to care about their CO2 footprint may disregard this entire process.

Despite this, larger corporations like General Motors, Disney, and Shell are voluntarily moving towards accepting a carbon price. Any one of these companies have the potential to change the market from their sheer volume of demand and can build up Nori’s marketplace with their participation.

Even if regulations aren’t passed, and companies aren’t required to limit their emissions, society’s cultural shift toward corporate social responsibility and sustainability may be enough to propel Nori to success. But market acceptance and adoption are the largest concern with this investment.

And the reality is we are in the first inning of blockchain implementation and there is a risk of being too early with a marketplace like this. For this reason, we do want to be clear that the upside is immense but the risk of being too early and struggling from adoption are very real and heightened to other investments we have diligenced in the past.

Paul Gambill is the founder and CEO of Nori – fiercely dedicated to the mission of carbon removal. Having earned a B.S. in Engineering from ASU and a Master of Engineering Management at Duke, Gambill has six years of experience in managing mobile and web application projects for clients including Nike and Starbucks.

In a phone interview with him, his passion was evident – even over the phone – as he spoke about his frustration with the fact that while everyone realizes that the issue of carbon building up in our atmosphere can have drastic effects on our lives and world, nothing was really being done about it.

Paul took it upon himself to use his experience in software production and engineering to create a platform that would help speed up the change. Gmabill believes that with the right infrastructure and incentive, the small efforts that are already in the works can be magnified to a much larger scale and can actually solve the issue of excess carbon by the end of this century.

Nori is set up to solve serious issues that need to be dealt with and is utilizing an already exploding form of technology – blockchain and cryptocurrency – to meet their end goal.

By verifying existing carbon removal processes and incentivizing just about anyone to pay for these methods, Nori benefits everyone involved with the exchange and nets an overall positive outcome on our environment.

With a strong team, strong model, and an opportunity to make a difference this is an intriguing social impact investment with significant upside, but as a reminder short term viability in such a new market may strain the ability to survive for long term prosperity. Put simply, we worry if they are too early to market.

Thank you for your vote on Nori on Republic

Thank you for your vote on Nori on Republic