Among this crowd of investment platforms, five have established themselves as market leaders in terms of dollars invested: Wefunder, StartEngine, Republic, Netcapital, and SeedInvest. The vast majority (more than 80%) of the deal flow in online startup investing comes from these platforms. Therefore, they offer a great opportunity to explore the state of the crowdfunding market.

Today, we will be comparing the number of new deals in the first halves of 2021 and 2022 among these five portals. This chart continues our July series examining how online startup investing has evolved from last year to now. Check out our articles on dollars invested and startup valutions to learn more. 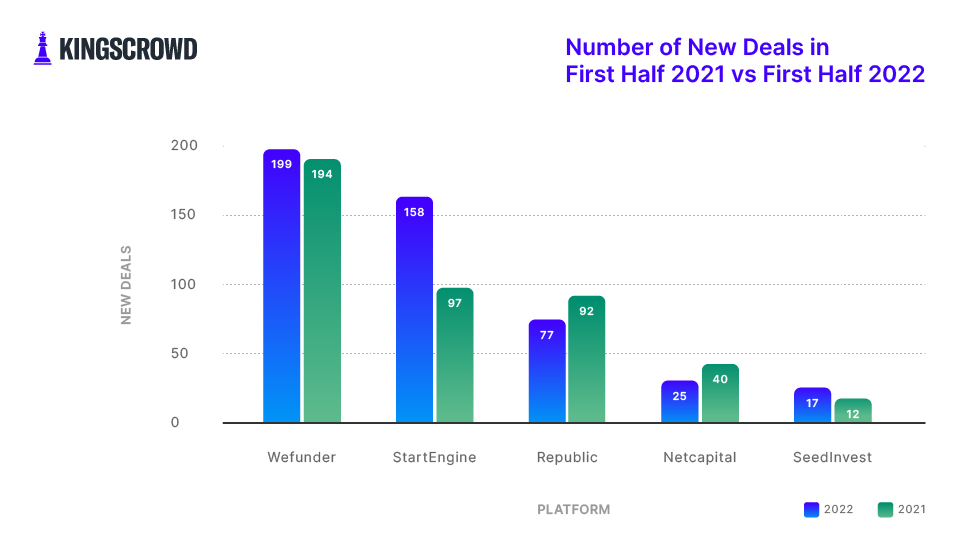 Overall, we’ve seen an increase of almost 10% in the number of new deals across the top five platforms. StartEngine stands out with the biggest year-over-year change – the platform went from 97 new deals in the first half of 2021 to 158 in this year. In fact, StartEngine publicly reported double the applications in the first four months of 2022 compared to 2021. Therefore, seeing such a sharp increase in new StartEngine deals makes sense.

SeedInvest also saw a notable uptick of 41.6% during this period. However, SeedInvest had fewer new deals than any of the other platforms in both years, so having five more deals than the previous year is a big change for it.

While the number of new deals continued to increase in the beginning of 2022, we are seeing a slower rate of growth than in previous years. Comparing the first half of 2020 to that of 2021 shows an increase of 20% in new deals. That growth rate has fallen by half when looking at the change from last year to now.

However, retail investors should still take heart. Venture capital (VC) funding is down 23% globally during the second quarter of this year. This decline in VC funding also follows the general downward trend in public markets. But online startup investing is proving more resilient. We’re still seeing growth in new deals, dollars invested, and other metrics. In fact, the slowdown in completed venture capital deals is pushing entrepreneurs to look elsewhere for funding. Given crowdfunding’s exploding popularity, companies have turned to online startup investing to secure funding from everyday Americans. I expect this trend to keep going as the overall economic downturn continues. And that means retail investors will continue to see high quality investment opportunities in the coming weeks.

How the JOBS Act Changed the Investment Climate

The Jumpstart Our Business Startups Act (JOBS Act) was signed… ...

We have compiled all the active Top Deals, Deals to… ...

Legion M Announces Details of Fourth Fundraising Round Which Currently Has More Than 5,000 Reservations

The First FAN-OWNED Entertainment Company, Legion M is excited to… ...