KingsCrowd has diligently collected data on startups raising money online since January 2018. A lot has changed in the online startup investing world in the last five years. Early on, many people doubted the staying power of online startup investing and retail investors’ interest in it. Now through a pandemic and on the edge of a potential recession, startup investing has proved that it is here to stay. So how has the market changed over the last year? For the month of July, KingsCrowd’s Chart of the Week will compare various metrics from the first half of 2021 to the first half of 2022. 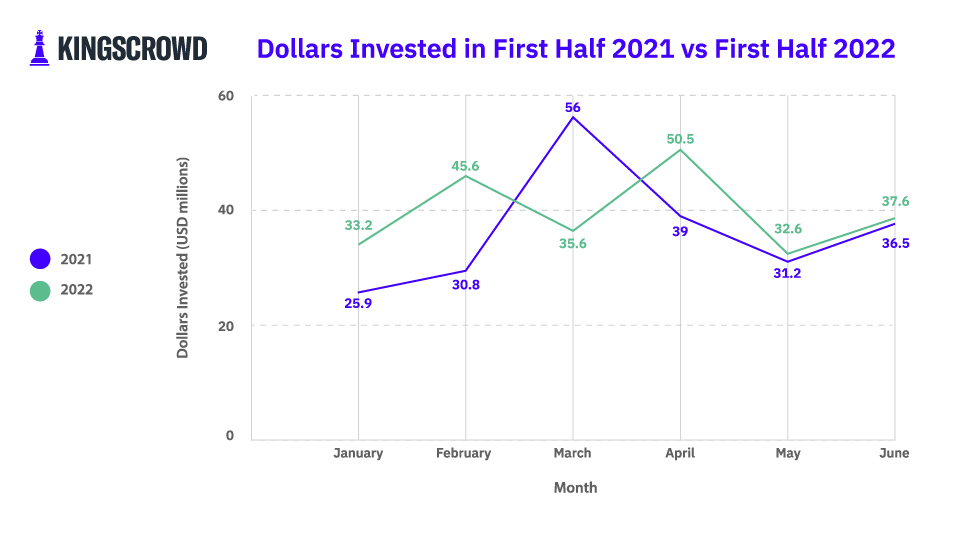 From January 2021 to June 2021, $219.4 million was invested in RegCF startup deals. March was the highest performing month at $56 million, while February marked the low point. In March, the maximum RegCF limit was raised to $5 million, and multiple startups immediately took advantage of this improved siutation. That rules update drove more capital than average for March. Overall, monthly investment amounts averaged $36.6 million in the first half of 2021.

In 2022, total Reg CF investments for the first half of the year hit $235.1 million, with a monthly average of $39.2 million. April has been the highest performing month so far at $50.5 million in dollars invested. And at $32.6 million, May comes in as the lowest month so far. However, our chart clearly shows that May was down month for both 2021 and 2022, revealing a recurring pattern in online startup investing. Due to certain SEC financial reporting requirements, many startups set their raises to end within the month of April. As a result, May tends to be a slower month overall with fewer active raises. Fewer deals means less money invested.

Although 2022 has begun with concerns about high inflation and a potential recession, online startup investing has held steady. While times of economic hardship can be risky for investing capital, they are often times of opportunity as well. The ability for investors to buy low – thereby enabling them to sell high later – is sometimes best achieved in markets like these. Particularly for startup investing, cooling venture capitalist sentiment is causing many startups to raise money at lower valuations than they might have previously. Lower valuations are good news for investors. Stay tuned next week for when we dive into detail on how startup valuations have changed since the first half of 2021!

The newest Reg CF and Reg A+ startup raises from… ...