Note: The following is a guest post from Wefunder’s Jonny Price and does not reflect the viewpoint or opinion of KingsCrowd.

When a great VC invests in a startup, the founders get so much more than money. They get world class expertise and advice, connections to the right lawyers, customer development, etc. etc. Social capital as well as financial capital.

And similarly, our vision at Wefunder has always been that when our crowd invests in a startup, the founders are receiving benefits beyond the money – customers, brand ambassadors and supporters.

To put this theory to the test, we partnered with Neurohacker, a startup that has now run three Regulation Crowdfunding campaigns on the Wefunder platform, to analyze their sales data. Because they are a consumer-facing business that sells predominantly online, Neurohacker’s sales data was well-suited to the conduction of this analysis.

We were extremely encouraged by the results we found.

This blog post highlights two ways in which Neurohacker’s Wefunder campaigns and investors have clearly driven revenue for the business:

We ran these results by the Neurohacker team, and they agreed with our conclusions. In the words of Neurohacker’s CEO James Schmachtenberger, “we decided to raise capital through the Wefunder platform for a number of reasons, but one of the key ones was to grow our customer base and increase our customer engagement. It’s great to see this Wefunder analysis, which 100% accords with the intuition we already had, and validates our decision.”

There were 156 people who made an investment in Neurohacker through Wefunder, and then went on to make their first Neurohacker purchase. These new Neurohacker customers were almost certainly acquired due to the Wefunder crowdfunding campaign.

Since they invested, these customers have already spent $66K with Neurohacker, and this number will obviously continue to grow over time.

The chart below shows how much these new-customer-investors have spent with Neurohacker per month. It is encouraging that this revenue is continuing to build over time. Interestingly, none of these 156 people made a Neurohacker purchase in June 2017 – the first month of their first Wefunder campaign. This is probably because most of the initial Neurohacker investors were existing Neurohacker customers. But over the course of their Wefunder campaign, as the campaign got more visibility with Wefunder investors (and through external marketing channels), people began to invest who were outside of the existing Neurohacker network. This is exactly what we would expect, and a big part of the Wefunder value proposition for founders. 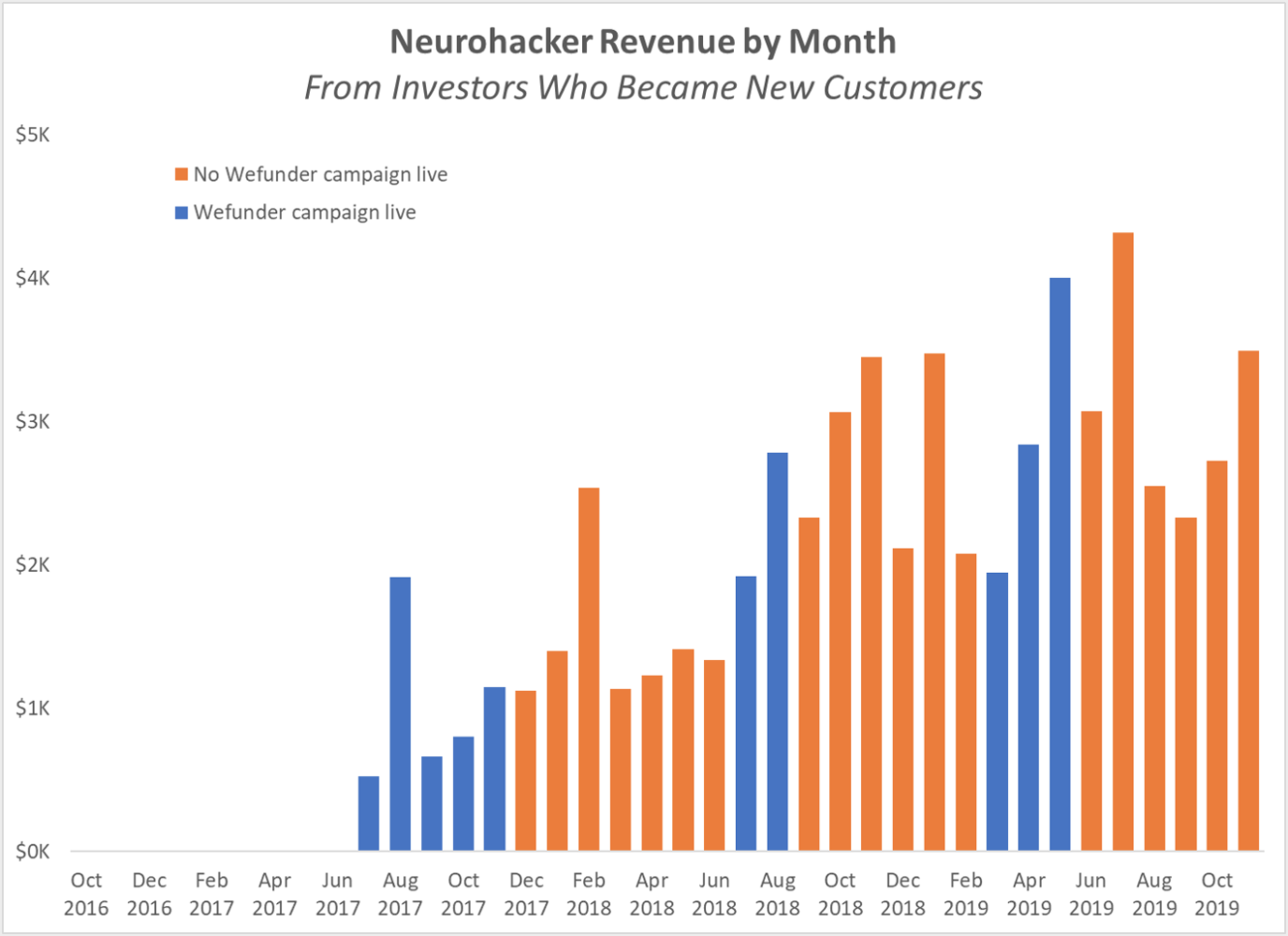 Assuming these two groups would have otherwise had a similar decline (which is, admittedly, a big assumption), that’s a 38% increase in engagement caused by the existing customer becoming an investor in Neurohacker. And of course, this would accord with what you would expect – if I am an investor in a company, I am probably going to be more loyal to that company vs. its competitors.

Even if you’re the founder of a B2B business, we on the Wefunder team firmly believe there can be significant benefits that you derive from your crowd of investors (including revenue benefits).

But especially if you’re a consumer-facing business, this analysis is dynamite.

By raising on Wefunder, not only can you raise more capital more quickly – by enabling yourself to tap into unaccredited as well as accredited investors, publicly promote your capital raise, and get in front of Wefunder’s growing network of 550K+ investors –, but you can also drive revenue through the marketing that accompanies your crowdfunding campaign, recruit new customers, and increase loyalty and engagement among your existing customers.

We’re pretty biased, but we believe that every early-stage B2C company should at least seriously consider running a crowdfunding campaign on Wefunder to raise capital and recruit customers. You can learn more and apply here: Wefunder.com/raise-money.

How Can A Startup Raise Capital Through Reg CF

RegCF or Regulation Crowdfunding is a method for early-stage private… ...

In this episode of Inside Startup Investing, Chris Lustrino talks… ...

The SEC raised the limit on Regulation Crowdfunding from $1.07… ...