Regulation Crowdfunding Trend Over the Years

May 16, 2022 marks the sixth anniversary of Regulation Crowdfunding — and a big step forward for American investors. For many years, non-accredited investors — or 97% of Americans — could not invest in startups in their early stages, which meant they missed out on massive returns. For example, if a non-accredited investor had been able to invest just $100 in Airbnb back in 2009, the investment would have been worth $4 million when the company went public in 2020. That’s a 40,000X return! Yet while these startups made the wealthy even wealthier, everyday investors didn’t have access to the same opportunities.

That all changed in 2012. Then-President Obama signed the JOBS Act into law, which allowed startups to raise capital from non-accredited investors. The last section of the JOBS Act, known as Regulation or Equity Crowdfunding, was enacted by the US Securities and Exchange Commission on May 16, 2016. Regulation Crowdfunding, or Reg CF, allows startups to offer and sell securities through crowdfunding.

As the democratization of investing empowered non-accredited investors, entrepreneurs started to realize the power of raising money from the public. Through crowdfunding, founders could tap into the wallets of thousands of enthusiastic investors, bringing in not only the capital they needed but also new networks, brand ambassadors and more.

Six years later, we’re wondering how crowdfunding deal flow has changed over the years. In this Chart of the Week, we look at the number of new Reg CF deals from January 2018 to April 2022. (We’re presenting data since 2018 because KingsCrowd was founded in 2018.) 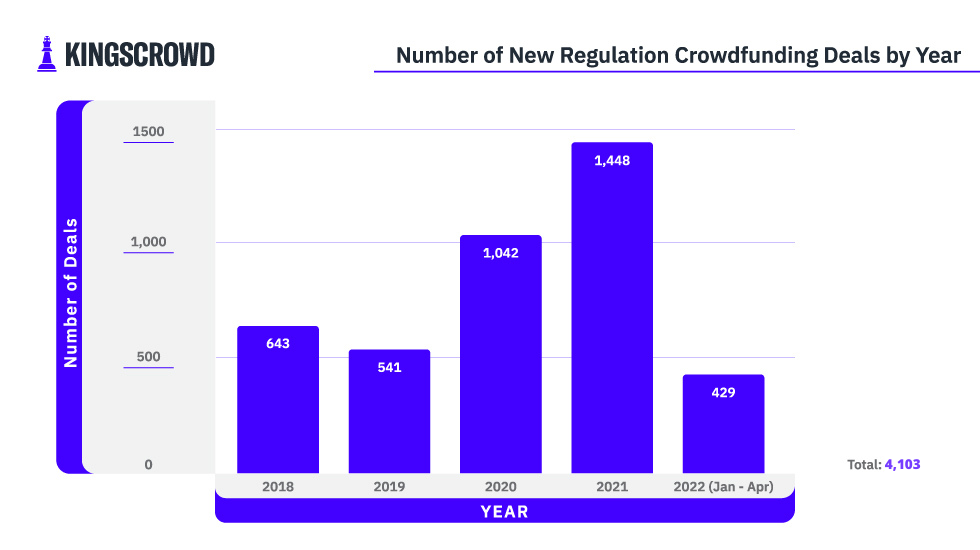 According to our data, the number of companies raising online decreased by 15% from 2018 to 2019. But deals increased by 92% in 2020 and then by 38% in 2021. The decrease in 2019 could be attributed to multiple factors. The online crowdfunding space was still considered new, so founders and investors were likely still not familiar with it or had some doubts about it. But by the end of 2019, Reg CF exploded in popularity. Even venture capitalists (VCs) started pouring money into the space.

What we found most surprising was the increased number of deals in 2020. When the COVID-19 pandemic started spreading across the US in spring of 2020, it crippled or bankrupted thousands of businesses. Nearly 100,000 businesses had permanently shut down by September 2020. But startups raising under Reg CF didn’t seem to be affected the same way. This could be because innovations at that time were sorely needed (like medical technology and telehealth) and many startups needed funding to solve the new problems introduced by the pandemic.

VC funding also decreased during 2020 — by 9% and 23% for the first quarter and second quarter, respectively. The negative effect of the pandemic on VC funding impacted female founders more heavily than male founders. That drove many founders to crowdfunding, which may explain the uptick in deals.

2022 is also seeing a good flow of new crowdfunding deals. We’ve seen 429 new deals in the first quarter, and this number is only expected to increase. The number of investors and founders who recognize the power of crowdfunding continues to grow. With as little as $100, non-accredited investors can not only own a part of a company, but also support a cause they believe in. That’s what makes Reg CF and the democratization of startup investing so important. We’re excited to see how the rest of the year unfolds.

Earning reports from Airbnb and Doordash, Coinbase is a crowdfunded… ...