Retail Investors Can Invest With the Best

A venture capital (VC) investment provides not only capital startups can use to scale and grow, but also a network of advisors and consultants that can help the business. Although VC is a value-added advantage, it can be hard to attain. In 2017, only 0.13% of US businesses received VC funding.

When online startup investing emerged, it provided a way to bypass the limitations and hurdles of VC investments. A paper published in 2021 showed that startups that are equity crowdfunded attracted less reputable VC firms compared to startups that haven’t raised online. However, the authors only examined 170 startups which raised capital via UK platforms – a far cry from the nearly 5,000 deals that KingsCrowd is tracking. The finding of this study might deter firms from investing in startups raising online. However, is it true that startups on the online private market attract low-quality VC firms?  In this Chart of the Week, we analyze the most active VC firms that have invested in startups raising online. We analyzed data from both Regulation A and Regulation Crowdfunding raises that occurred between January 2021 and May 2022. 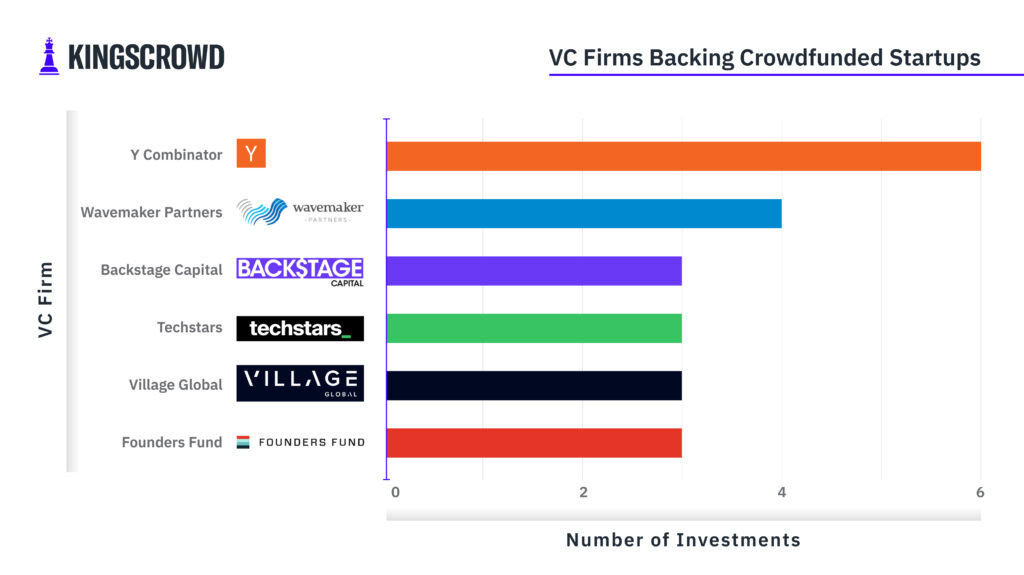 We found that 4% of companies that used online startup investing to raise capital were VC-backed. That’s about 30x higher than businesses in the non-crowdfunding space. Across that 4%, we found that the most active VC firm was Y Combinator – followed by Wavemaker Partners. Backstage Capital, Techstars, Village Global, and Founders Fund all tied for third place. These VC firms have strong reputations beyond online startup investing. For example, Y Combinator, Techstars, and Founders Fund are some of the most active tech investors in the US at large.

Based on our data, there does not seem to be a relationship between low-quality VC firms and startups raising capital online. As more startups see the power of retail investors, many high quality companies backed by notable investors are opening up raises to the public. And as companies prove high performance in the upcoming years, they will probably attract the attention of highly reputable VC investors. So at the end of the day, entrepreneurs should not worry about having to sacrifice VC investments when raising online. Instead, both VC and crowdfunding can work together to diversify capital raises for founders while also giving a financial opportunity for retail investors.

A venture capital (VC) investment provides not only… ...