"Revry aims to be the new voice of queer entertainment. More than just TV and film, Revry is breaking the mold by showcasing LGBTQ+ music artists, short films, digital series, and boasting one of the largest queer podcast networks in the world. But Revry is so much more than a simple content platform for a niche audience–Revry is a community. This is why Revry is a lifestyle brand: our mission is not about distributing LGBTQ-themed content; it’s about sharing genuine queer culture with the world. Towards that end, Revry has expanded into 100+ countries, with a reach of 35 million, has closed hundreds of content contracts totaling over 4000 hours, and has streamed over 21 million minutes to its global audience."
Create a free account today to gain access to KingsCrowd analytics.

Revry has been selected as a “Deal To Watch” by KingsCrowd. This distinction is reserved for deals selected into the top 10-20% of our deal diligence funnel.

When Damian bought his Apple TV in 2015, with his partner, he began searching for LGBT content, expecting for there to be a number of results, as with any other search query – searches that never appeared. While there were niche streaming services targeted at individuals looking for anything from horror to Bollywood, there were no existing streaming services specifically catered to an LGBT audience.

This is common throughout the streaming industry. Companies like Netflix and Spotify have nearly endless amounts of content available at any subscriber’s fingertips, featuring hundreds of thousands of genres meant to appease to as general an audience as possible, with no specific target streamer in mind.

While these companies have enjoyed tremendous successes with capturing a wide and diverse audience, consumers like Damian with specific interests and needs have found it difficult to find content that is specifically tailored to them.

Revry is Damian’s solution to this lack of LGBT-specific content providers was simply to create his own content provider, catering to the unique demands of LGBT audiences. Revry has built up a comprehensive content library, which features over 4,000 hours of films, music, podcasts, and series, selected on the basis of inclusivity with regards to LGBT and other diverse groups.

Being an early entrant in the marketplace, Revry has been able to amass a large amount of content that the company exclusively holds global rights to. Their status as a leader of LGBT content producers has also helped them gain more exposure in mainstream media, as well as popular culture. For example, WIRED Magazine wrote a piece about the company’s ambition to boost media representation of LGBTQ+ culture globally, and The Hollywood Reporter wrote a review on Revry’s original documentary, “Room To Grow”.

These examples, among many other media mentions, helps validate and demonstrate interest in LGBTQ+ focused content.

Otherwise, the company has also seen success in collaborations with popular content creators, co-producing an Emmy-nominated show with Funny or Die and featured on TheWrap. Their unique business has also helped secure deals with LGBTQ+ groups, like becoming the exclusive streaming outlet for The Trevor Project’s high-profile “TrevorLIVE” show.

Revry is able to access a number of diverse revenue streams. Its primary revenue stream is ultimately its viewership. Users can watch Revry’s content on Revry by purchasing a subscription, or for free. Free users have advertisements interspersed throughout their page, while subscribers can enjoy an ad-free experience. This type of business model helps to ensure that Revry is able to capitalize on viewers of all sorts, both subscribers as well as free users.

But, Revry is also able to capitalize on a number of other different peripheral businesses. For example, the company can generate additional revenue by licensing their original content to other networks, either on DVD, TV broadcasts, or other third party channels. The company is also able to leverage its connections in popular culture to host live events, where sponsorship funds and ticket sales can simultaneously boost brand awareness as well as profits.

The company primarily targets a younger audience interested in contemporary queer culture, which for the most part, has been primarily untapped by content providers and media companies. This LGBTQ+ demographic is not only sizable but holds a significant amount of spending power. In 2016, the LGBTQ+ population was estimated to have $917 Bn in purchasing power. In fact, this purchasing power is sure to grow in the next few years, considering that a large proportion of these LGBTQ+ individuals are still young, and not yet part of the workforce. 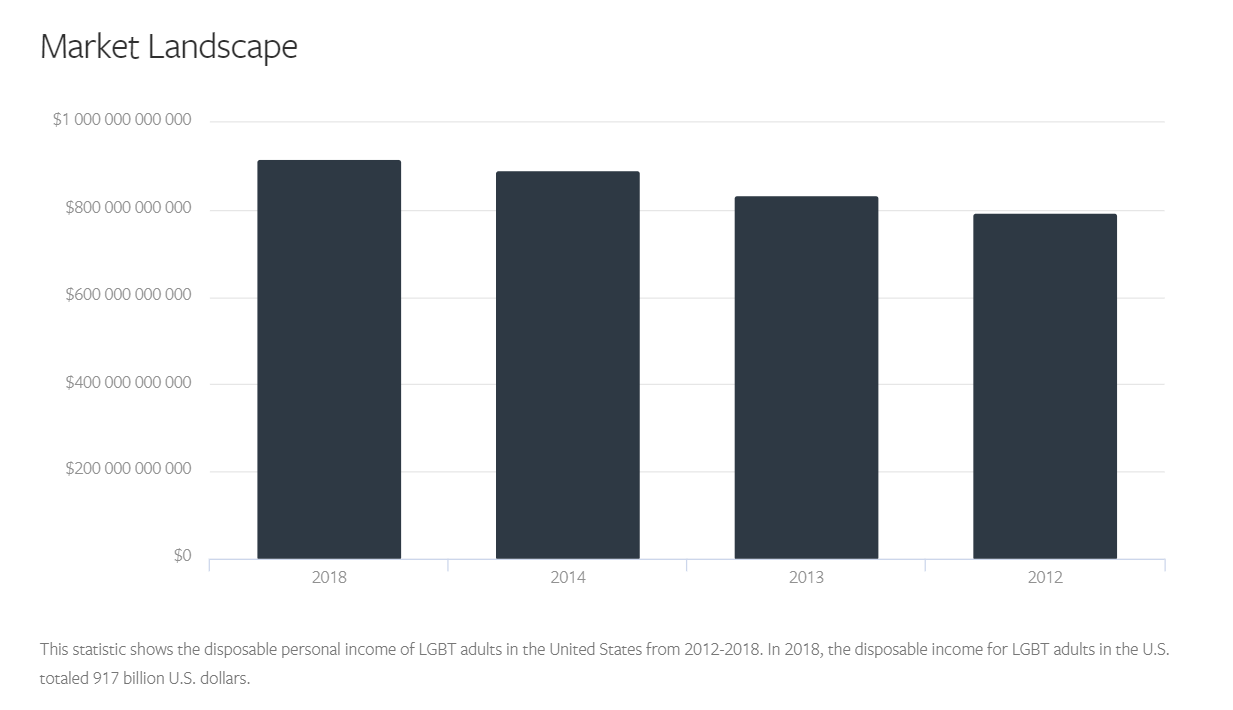 The relative youth of the LGBTQ+ demographic is also a great opportunity for Revry. This younger population is far more likely to be consuming content through streaming services, either on phones or tablets, and prefer short forms of content that require less commitment than a lengthy movie.

These demands by the younger LGBTQ+ population are exactly what Revry’s content revolves around. Especially with their series of native apps and channels, the company’s content and distribution channel matches well with their ideal market.

Moving forward, the company aims to continue building its core business – its streaming service. To achieve this, the company has two primary objectives.

First of all, the company needs to increase brand awareness worldwide. To this end, the company plans to dramatically boost its advertising spend to focus on the LGBTQ+ population in the English-speaking world through the conventional methods of search-engine optimization and digital ads. However, the company also has emphasized the importance of leveraging social media to further boost brand awareness.

The company’s target audience is younger, and therefore more attuned to social media as a source of both socialization and information. If Revry is able to successfully mobilize their social media following to create a community of Revry users, consumers are far more likely to feel a sense of brand loyalty and thereby continue watching their content.

Revry also hopes to continue generating original content. Taking the example of The Hollywood Reporter’s article, a well-written and well-produced film has the potential to attract reviews and media attention in a very positive way. Original content also helps distinguish Revry from other content providers.

If a consumer can watch the same LGBTQ+ content on Netflix, then consumers are likely to subscribe to Netflix instead, since they would also be able to watch a large variety of other media content. Original content helps drive Revry’s unique added value to the LGBTQ+ community, not only because they can serve as a one-stop-shop for LGBTQ+ content consumers, but also because individuals looking to watch a specific title may be driven to Revry’s platform, and become a regular subscriber.

Reflecting these two primary goals, the company plans on allocating almost half of funds raised toward their programming expenditure, and 23% of their funding toward marketing and advertisements.

In 2017, 4.5% of American adults identified as LGBT, 1% higher than in 2012. And, with the percentage of LGBT identifying adults growing every year, the market for LGBTQ+ products proportionally grows as well. With over $917Bn in purchasing power, the LGBT market is certainly very valuable.

Revry is likely able to capitalize on this demographic’s underrepresentation in current media by emphasizing its specific focus on LGBTQ+ centered content. Representation of minority groups in media is often highly valued, seen as a significant milestone in creating a more inclusive society where differences can be celebrated. Yet as the LGBT-identifying population continues to grow, major studio productions with LGBTQ+ representation actually fell from 23 to 14 from 2016 to 2017, respectively.

Despite there being a clear, growing audience for LGBTQ+ content, content creators seem to be failing to meet the demand for LGBTQ+ content. If Revry continues with not only its content distribution model, but also its plans for generating original content, Revry will have a clear competitive advantage over other media outlets and a defined, yet substantial niche market.

Despite Revry’s core business focusing around the company’s streaming service for LGBTQ+ audiences, Revry is ultimately still a content producer. With its new emphasis on original content creation, Revry can expect their revenues to accelerate beyond their subscriber growth from their peripheral revenue streams by licensing their original content.

Millennials and Gen Z’ers are projected to hold 40% of purchasing power by 2020. Individuals from these generations are far more likely to value and speak out on issues of nondiversity, therefore placing a burden on content providers to distribute films that feature diverse casts.

Revry is in the business of making films for a diverse audience. While their content is already valuable now, as the new generation continues to change the market landscape towards a more inclusive diverse atmosphere, Revry’s dominance in LGBTQ+ content is likely to help boost its revenue in the coming years.

Revry is a Deal To Watch, well positioned in a niche market that is set to grow significantly in the next few years, driven by tailwinds from trends in consumer behavior and demographics. The founders have managed to identify a market segment with a clear unmet demand – representation in media for the LGBTQ+ demographic. However, being in the content business can be challenging and building a good deal of this content from the ground will be extremely capital intensive.

With much more funding needed to build this business at scale we caution that investor upside could be hurt by future dilution and the capital nature of the business could put a strain on continued growth.

Regardless, attractive exit opportunities will present themselves and the uniquely differentiated content they are creating and licensing should drive meaningful value to potential acquirers (e.g., Hulu, Netflix, Roku, NBC). The team has executed well to date and is showing that there is a real business to be had in this market.

The company’s successful partnerships with industry leaders, exclusive licensing deals, and plans for further growth into not only high-budget original content help to distinguish the company from competing content providers, and will help drive a loyal subscriber base as the company drives higher viewership with its marketing campaign. With its current traction in such a promising market, Revry is likely to grow beyond the current $9MM valuation within the next 5 years.

Thank you for your vote on Revry on SeedInvest

Thank you for your vote on Revry on SeedInvest