This week, I focus on the Finance sector – a sector that is likely interesting to those who participate in equity crowdfunding. As in weeks past, keep in mind that all 2020 data is still incomplete, so statistics might skew lower than prior years. 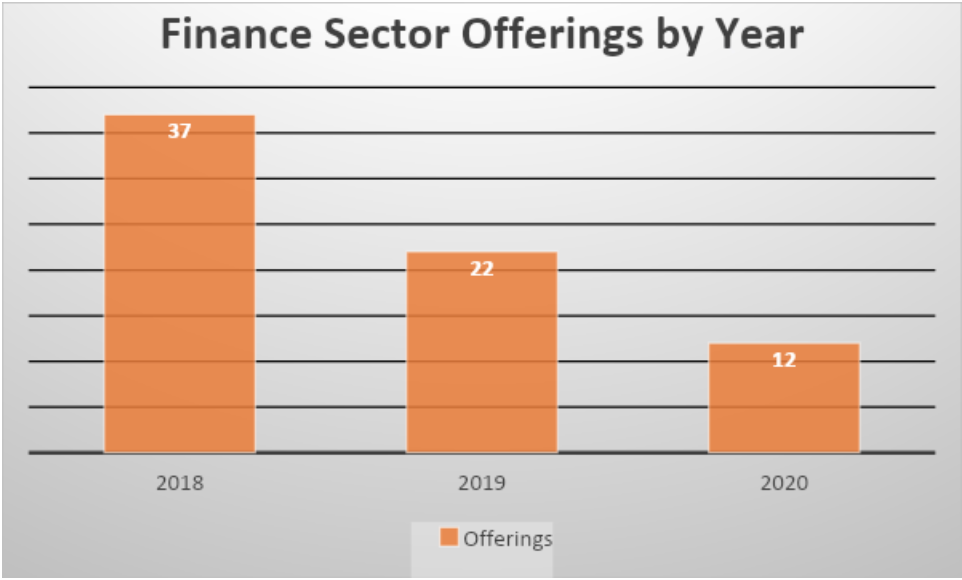 The Finance sector provides us a unique round minimum pattern. While ticking up slightly in 2019 from $62K to $68K, 2020 saw a SHARP decrease in round minimums, down to an almost unseen level of $13K (as a point of reference, $10K is the lowest amount an offering can target). One might think that this would almost guarantee offering success and may be a drastic response to the dip in success rates in 2019. 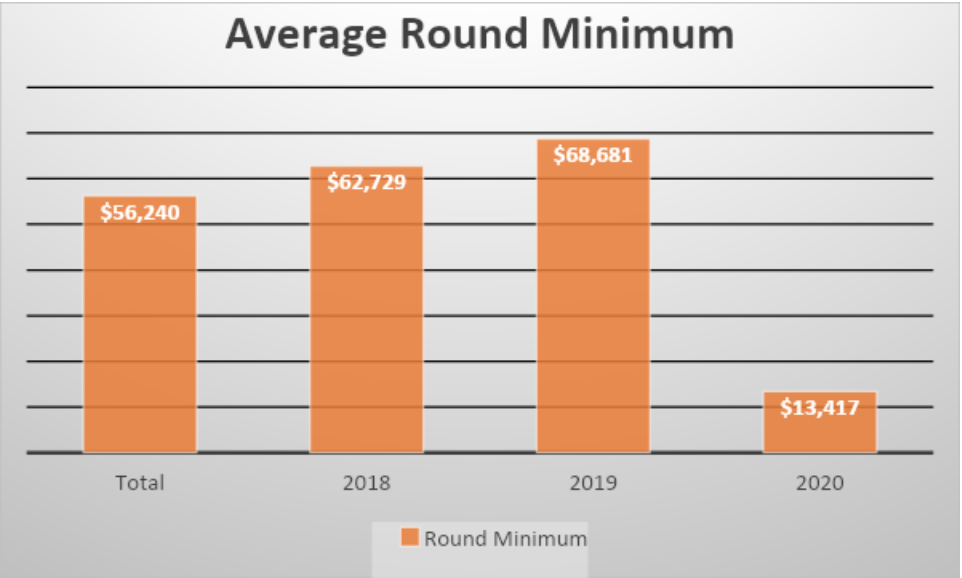 I alluded to this above, but with the Finance sector, it appears that success rate and round minimums are closely related. While the overall trend in minimums appears to be decreasing, the sector saw its minimums increase last year. I don’t think it is unreasonable to attribute the drop in success rates seen in 2019 to those increased minimums. Potentially in response to this, minimums have dropped in 2020, and already we have seen a return to 2018 success rates. Though it is potentially a little concerning that this number isn’t higher, given the very low bar for success. However, the 4 offerings that have not yet hit their target are all still live, so this number could very easily jump up quite a bit with only one or two of those hitting their target. 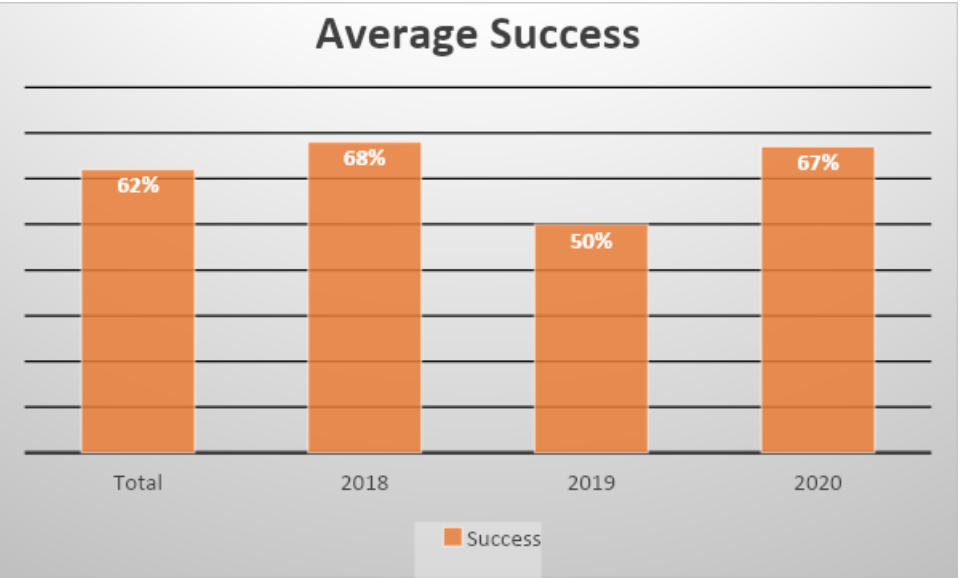 Potentially due to the decreased minimums, 2020 has also seen a drastic decrease in amounts raised, with only 1 offering crossing the $100,000 threshold. This drop begs the question, “what are these firms raising money for?” Are these firms in 2020 using the platform as a way to get recognition or their product out there? Expand their user base? This is a number I would keep your eye on for the rest of the year if you can, and we may revisit it at some point. 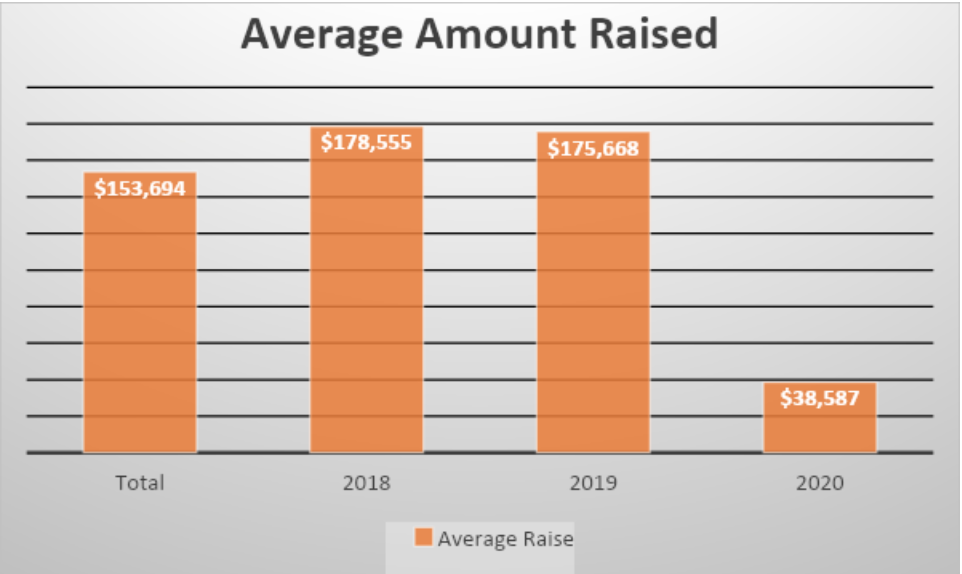 The decrease in investors in 2020 is consistent with what we are seeing in the total investment dollars within the sector, which again, is a little concerning. It indicates that crowdfunding investors may be putting their investment dollars in different sectors, or it potentially speaks to the quality of offerings out there. As with dollars raised, we will be keeping an eye on this and revisit later on in the year to see what happens. 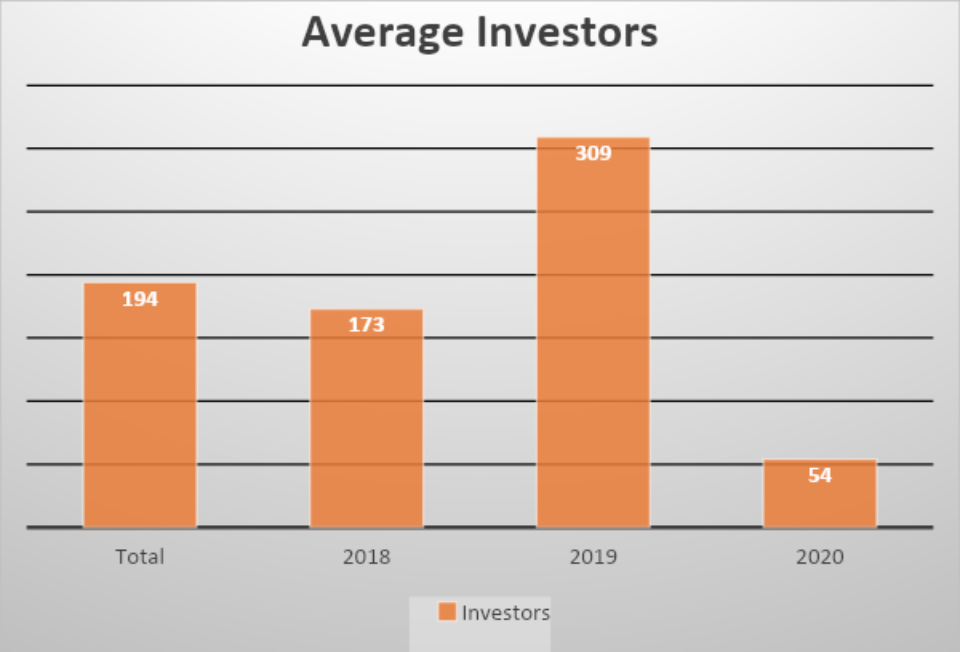 In this next section, I break down where the Finance offerings have positioned themselves on the various offering platforms, in total and by year. 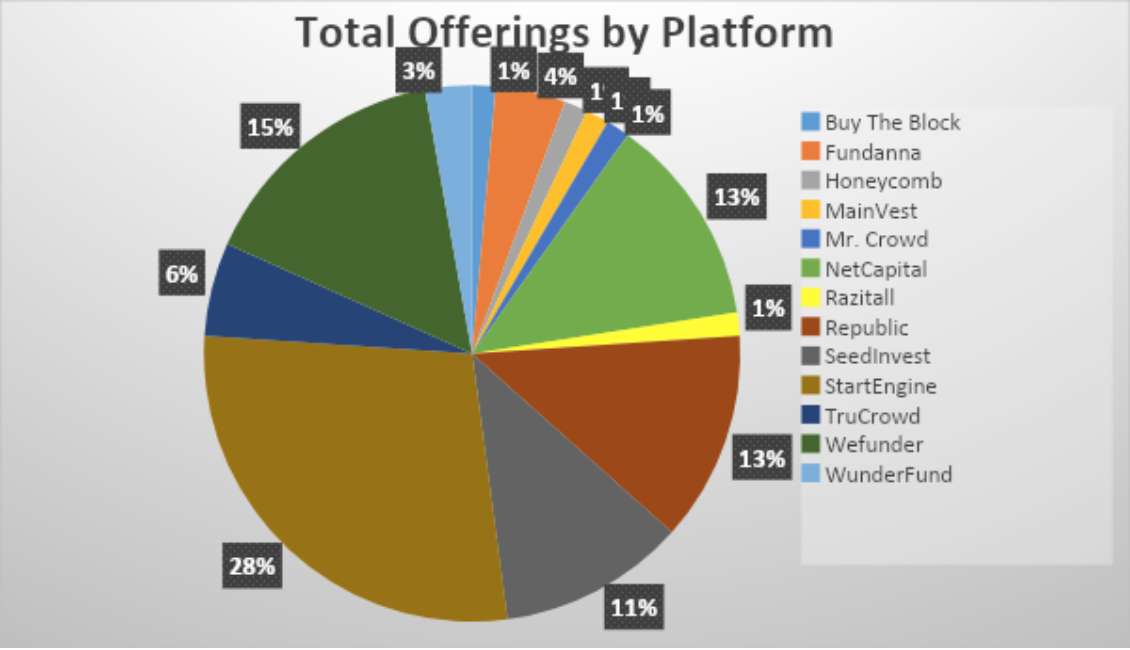 StartEngine has the overall share of the Finance sector, but we see a number of platforms crossing the 10% threshold, which tells us that there is no one who is totally dominating the market (as we have seen with some other sectors). 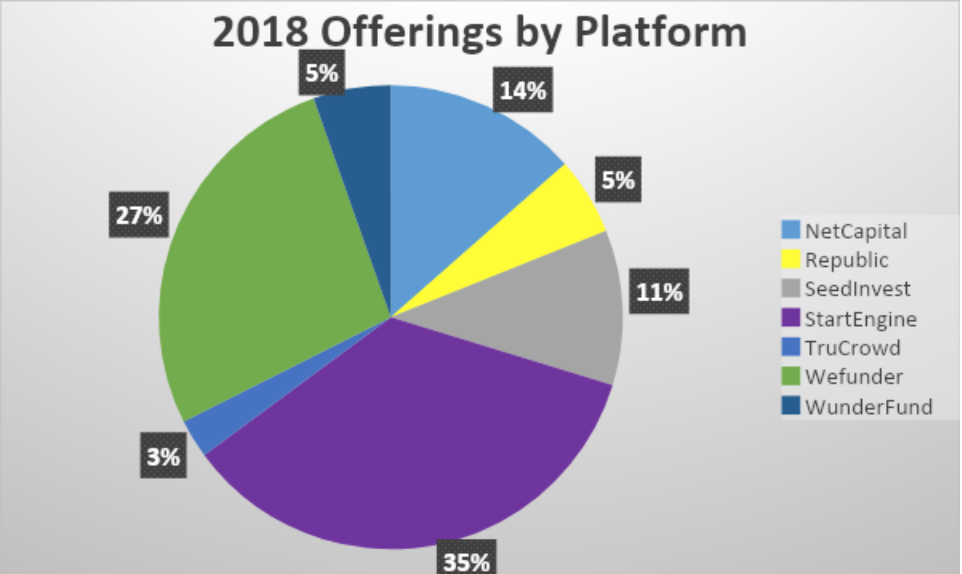 At the outset, as has been the case with most sectors in 2018, StartEngine and Wefunder dominated the market. Smaller players began to position themselves for growth in the sector. 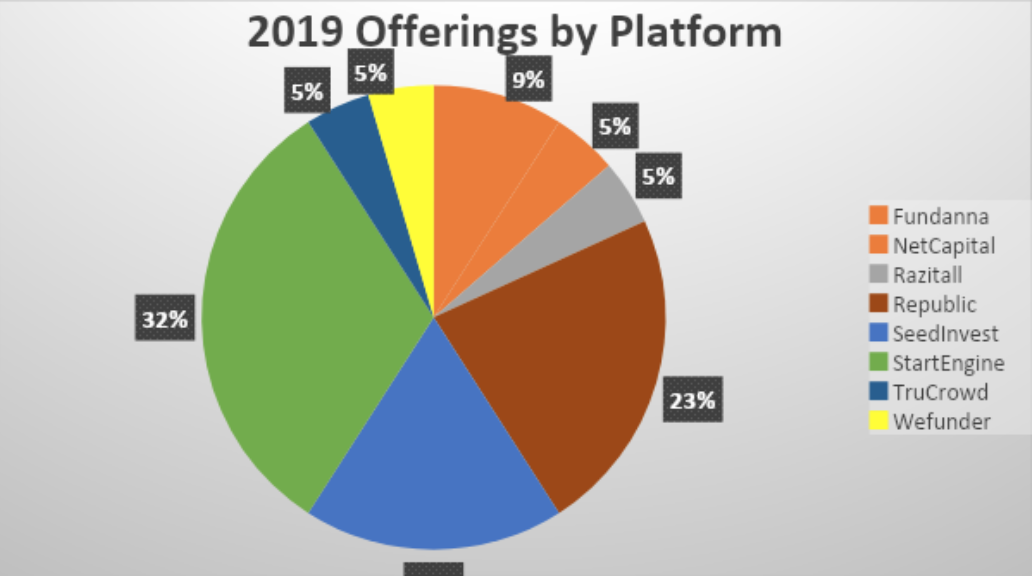 StartEngine continued to rule the sector in 2019. While Wefunder saw a significant drop off (down to 5%), Republic and SeedInvest filled those shoes, combining for a greater market share than StartEngine. 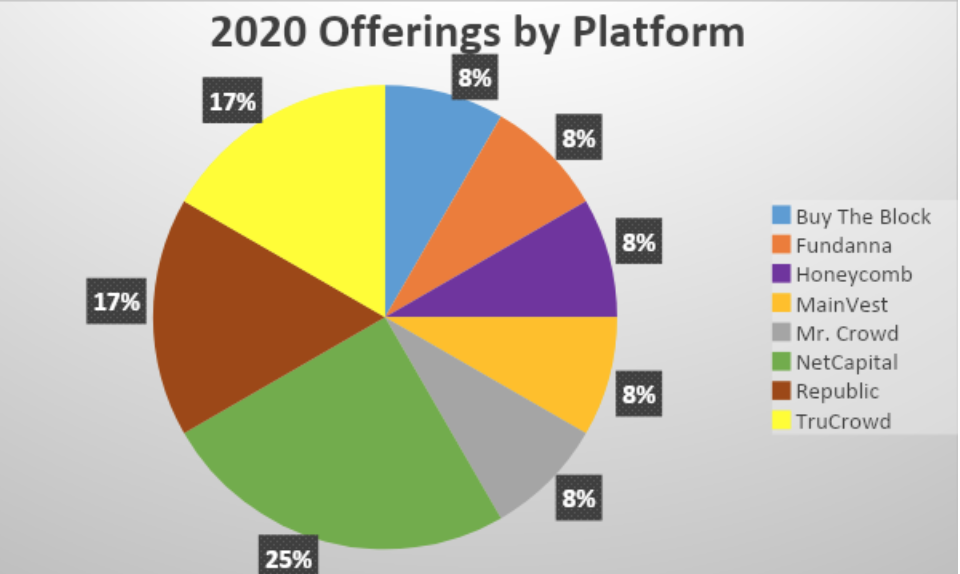 The Finance sector in 2020 gives us something I don’t think we have seen before – no StartEngine or Wefunder offerings so far. That absence has given platforms like NetCapital and TruCrowd room to grow a bit and establish a footing. I don’t expect the two power players to stay out of this data for the whole year, but it will be interesting to see who rules the market when 2020 closes.

Finally, some statistics on the financial data for some of the companies raising capital through Reg CF. This information is obtained directly from a company’s SEC Form C filing. Information has not yet been collected for 2020.

As may be expected, a lot of companies raising money through Reg CF are still in their early stages, and have not yet turned a profit. But looking back at the drop in success rates in 2019, this may be another data point to explain the dip. Net losses increased by nearly $200,000, which is not a small amount. However, we have seen other sectors with increased year-over-year losses, so this may not entirely explain the success dip. It will be interesting to see as we get 2020 financial data whether these losses are creeping closer to gains. 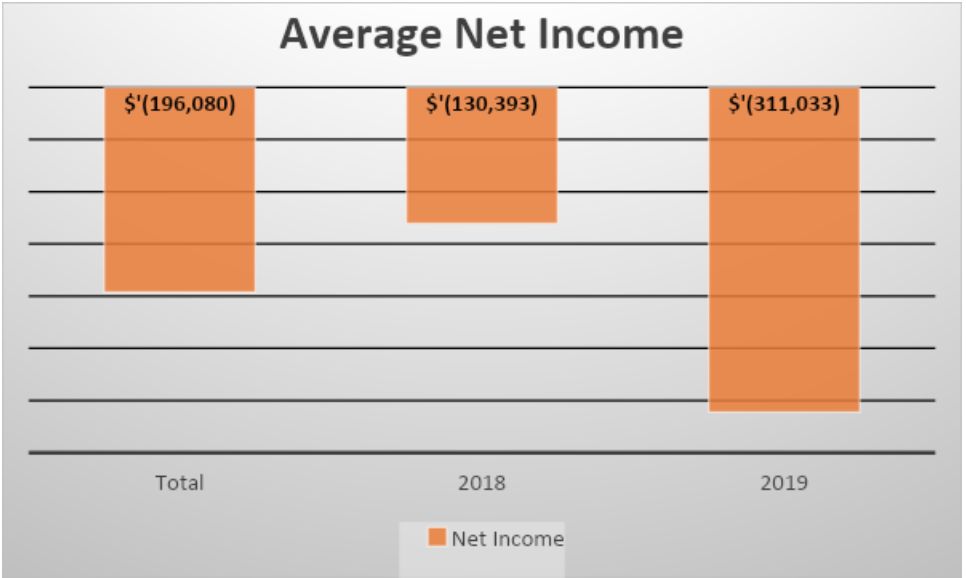 Firms were spending a lot in 2019, as the over 100% increase in revenues was not enough to avoid the nearly $200,000 increase in net losses. So revenues are moving in the right direction, but not at a pace that exceeds costs. A firm’s Form C will give you a good sense of where firms are spending money, and it will also give you a sense of how they plan on putting your investment dollars to use. These are critical to examine in a sector where firms seem to be spending a significant amount without much of a return. 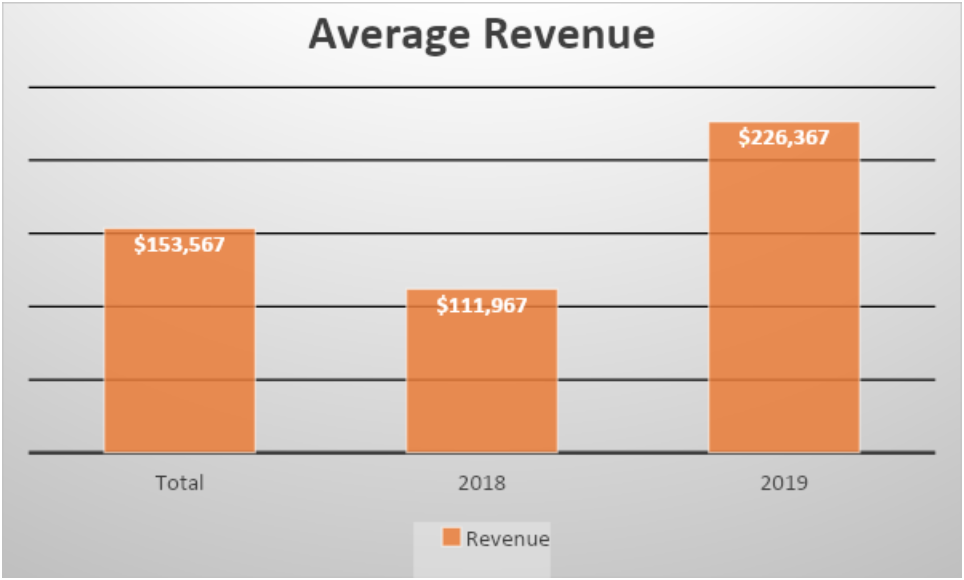 Some Finance firms KingsCrowd is looking at:

StartEngine – A Deal to Watch

NuuRez – A Deal to Watch

Infinovate – A Deal to Watch

How to Evaluate Great Founders When Investing

I often am asked by individuals considering investing in startups… ...

How to Invest In Startups and Where to Find Them

This week, I focus on the Finance sector… ...