Today, I look to scratch the itch left by the void in the sports schedule by looking at offerings in the Sports sector. The same disclaimer applies from prior weeks, that 2020 data is going to be skewed due to lack of a complete year of data.

Compared to the other sectors from prior weeks, the Sports sector is certainly on the smaller side when it comes to offerings, with a total number of offerings over the last three years that is less than the 2020 Consumer Products offerings. This lack of offerings could be viewed as less competition within the sector for investment dollars (a good thing), or as a sign that these firms aren’t turning to crowdfunding as frequently for a reason (a not as good thing). A promising sign for the sector for the year is that as of now, 2020 offerings appear on pace to exceed 2019 offerings. However, with the impact of COVID-19 and what we have seen in the world of professional sports, there’s a potential to see an impact to the sector in new offerings launched the remainder of the year. 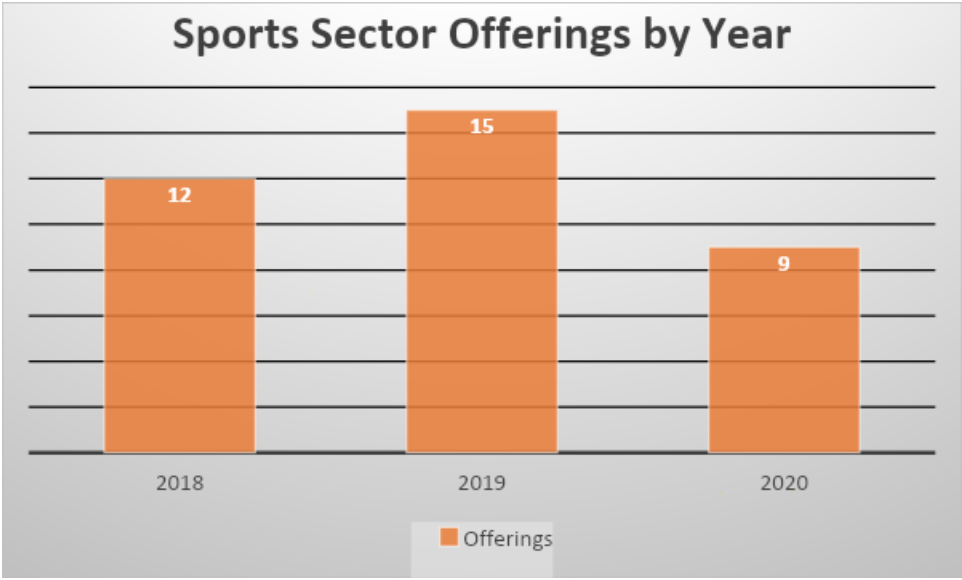 So far, Sports is an outlier sector in that the average round minimums have been increasing year-over-year, with 2020 offerings looking for over $100K. This number is well in excess of where we are seeing other sectors, but as we will see below, did not appear to impact success rates in 2019. It remains to be seen how this even higher number will impact 2020. 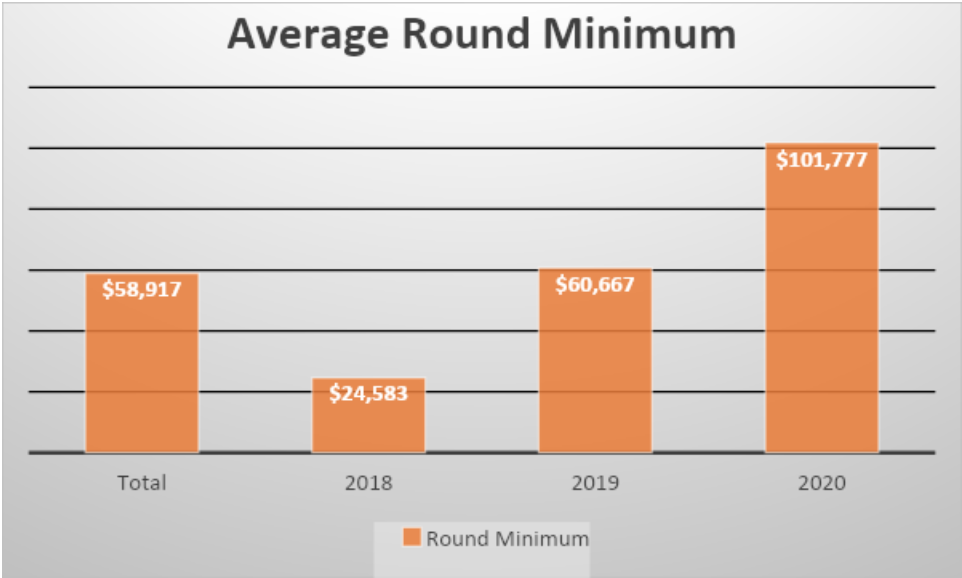 As mentioned above, the 2019 success rate of 80% did not appear to be impacted too much by the higher than average round minimum (and was one of the higher success rates we’ve seen so far). Despite this high year, the overall average is being driven down by 2018 (the lowest year we’ve seen) and 2020 (final results still TBD). While it is probably unreasonable to assume 2020 will see success levels like 2019, given the even higher round minimums, the current level (with room to grow) would suggest we won’t see a year like 2018 again. 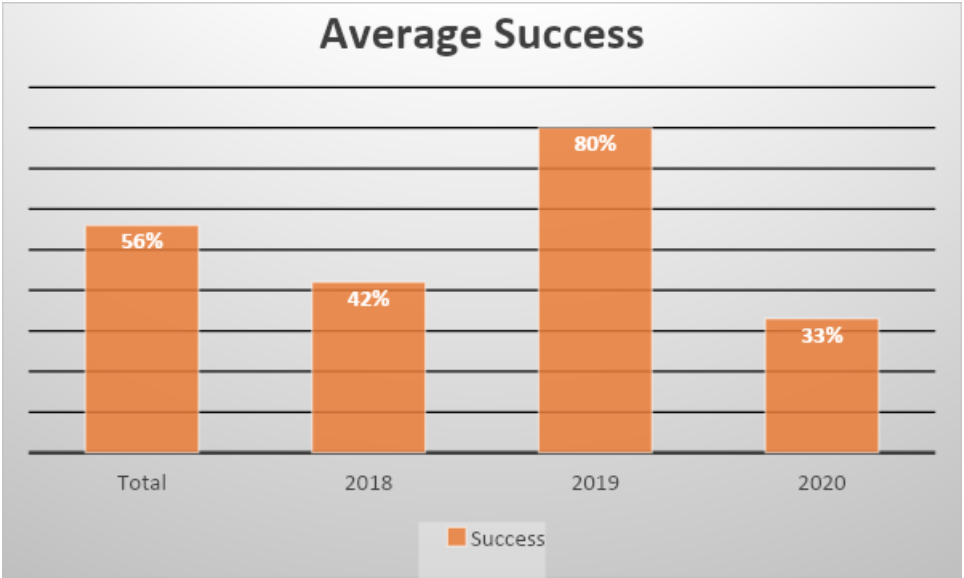 The average amount raised so far in 2020, $48,610, is well below the prior year average, and the total average (which is significantly boosted by 2019 numbers). The prior year average got a boost from two offerings raising over $800K, Hylete and Chattanooga Football Club. In 2020, the offerings still active are averaging $64,000, with time left in those offerings to increase that number. 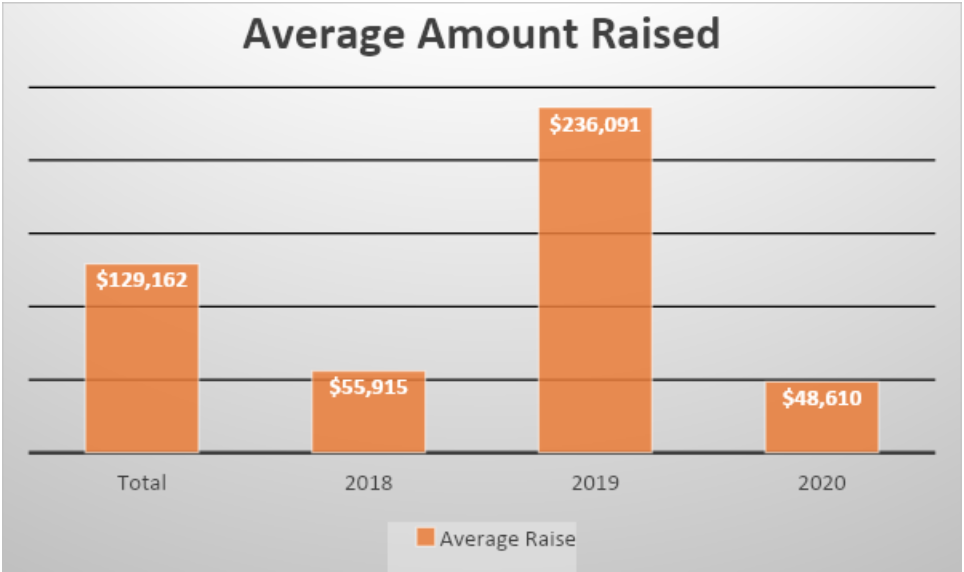 Following a similar pattern as the other graphs above, 2019 stands tall above 2018 and 2020. With 2018 and 2019 results already written, the question is where will 2020 end up. Using the first offering confirmed closed and meeting its target (Plei), who rounded up 295 investors, as a data point for where 2020 offerings can end up, it is reasonable to expect the average of 73 investors to increase, especially when you consider the 5 active offerings currently have average investors of 73. 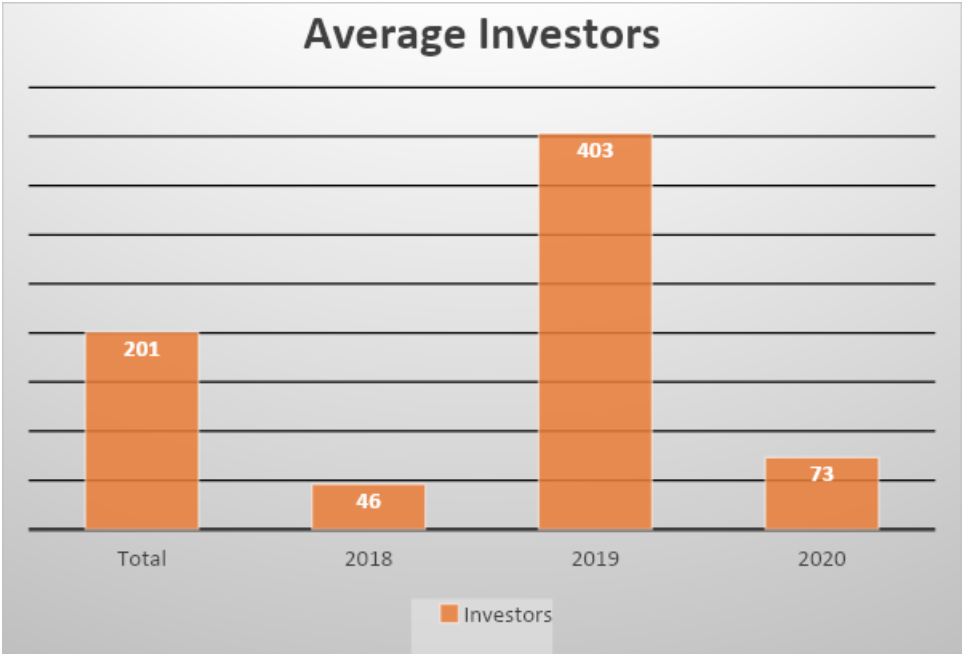 In this next section, I break down where the Sports offerings have positioned themselves on the various offering platforms, in total and by year. 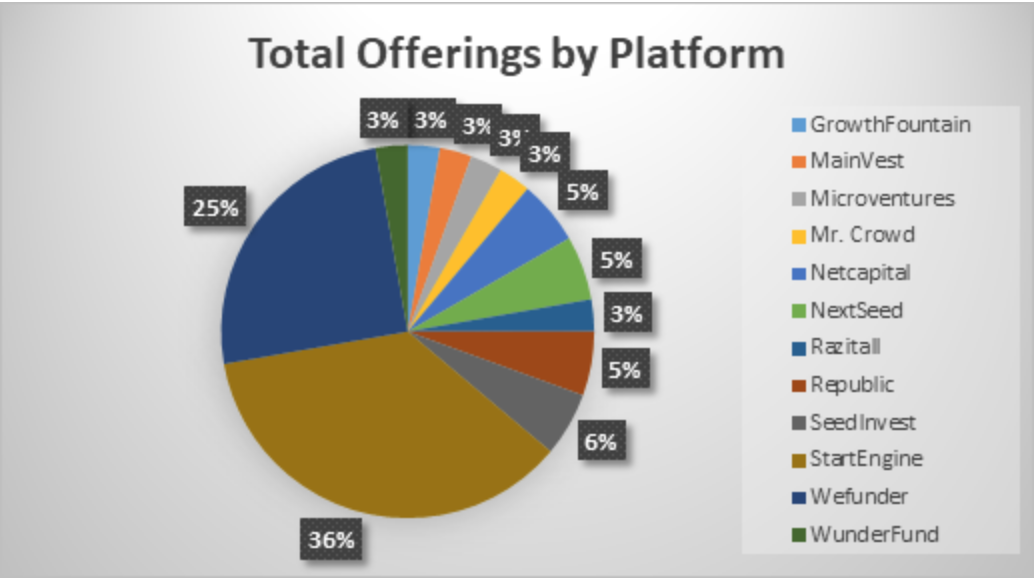 As we have seen with other sectors, StartEngine and Wefunder combine to take up over 50% of the Sports market. None of the other 10 platforms account for greater than 6% of the market, so there is certainly a hierarchy in platforms at play, without a niche platform entering the mix to take market share away from the big players. 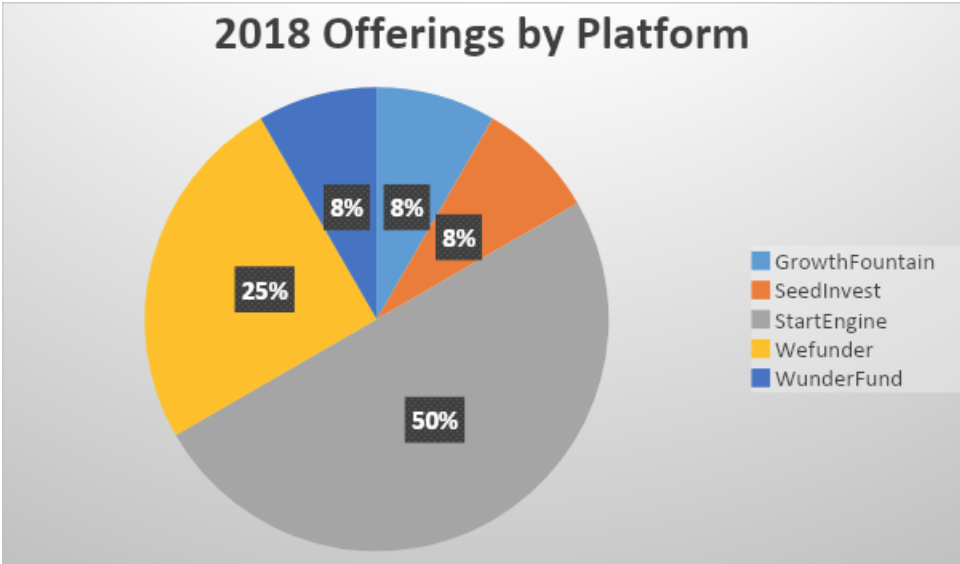 The picture here is fairly simple, and in line with what we see for the total time period – StartEngine and WeFunder are kings, with little competition in the marketplace in the early going. 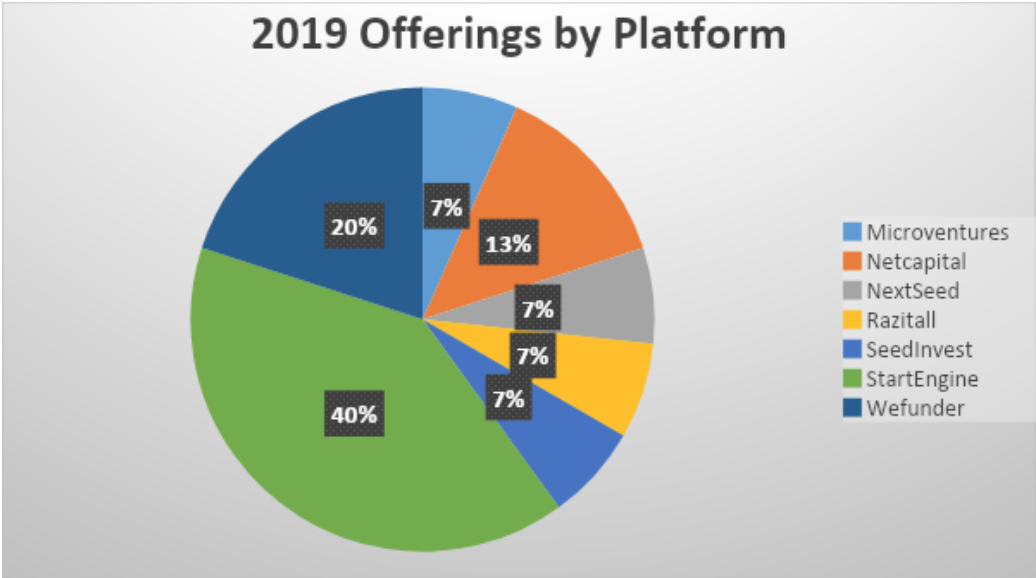 In 2019, the number of platforms in our sample expanded by two from 5 to 7, but the story remained the same, with 60% of the market going to StartEngine and Wefunder. 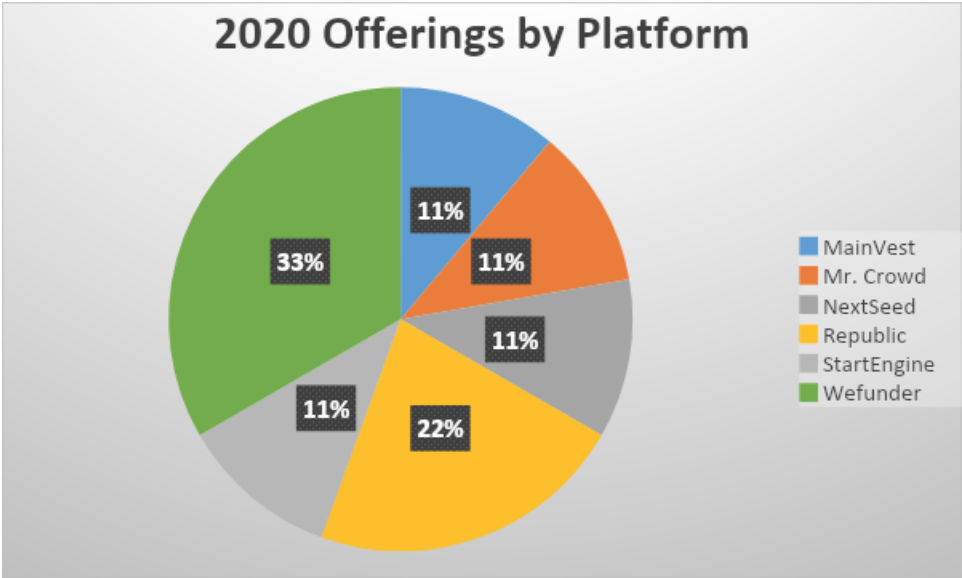 2020 still sees Wefunder and StartEngine in the driver’s seat, but also the introduction of MainVest and Mr. Crowd into our sample, evidence that the Sports sector is expanding to new offering platforms.

Finally, some statistics on the financial data for some of the companies raising capital through Reg CF. This information is obtained directly from a company’s SEC Form C filing. Information is not yet available for 2020.

As may be expected, a lot of companies raising money through Reg CF are still in their early stages and have not yet turned a profit. As has been the case now for the past few weeks, 2019 saw an increase in net losses experienced by these firms. The significant driver of this decrease is the net losses recognized by Hylete in 2019 of $5M. Removing these losses from the equation, that $(352K) loss turns almost to break-even at $(16K). 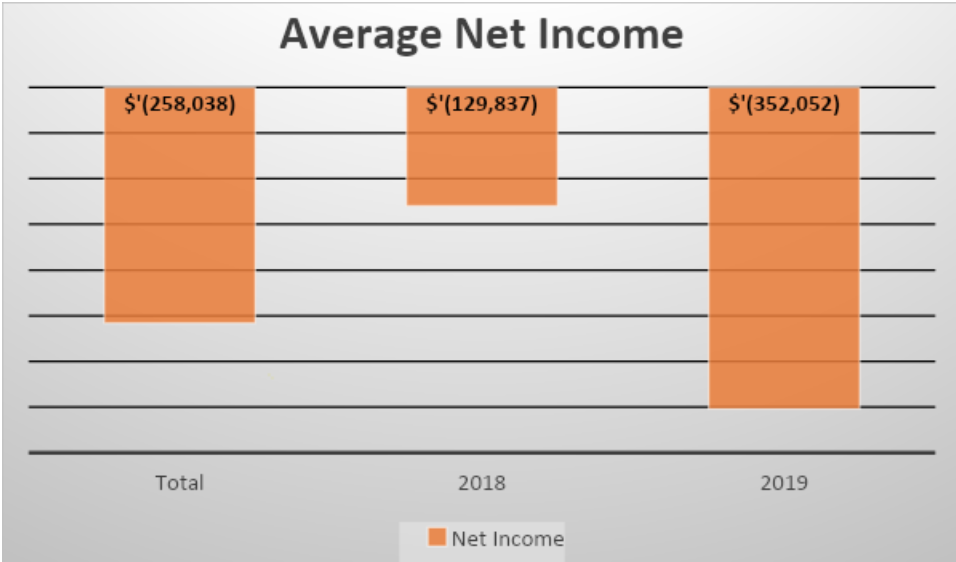 We saw an increase in average revenues with 2019 offerings, but as with the big driver of net income above, we can attribute much of this to Hylete (which had revenues of over $11M). Excluding them from the equation, average revenues drop to $275K. That’s still an increase from 2018, but not nearly as significant as it may first appear. The upward trend in both revenues and net income (loss) appears promising at least for the overall outlook of these companies. 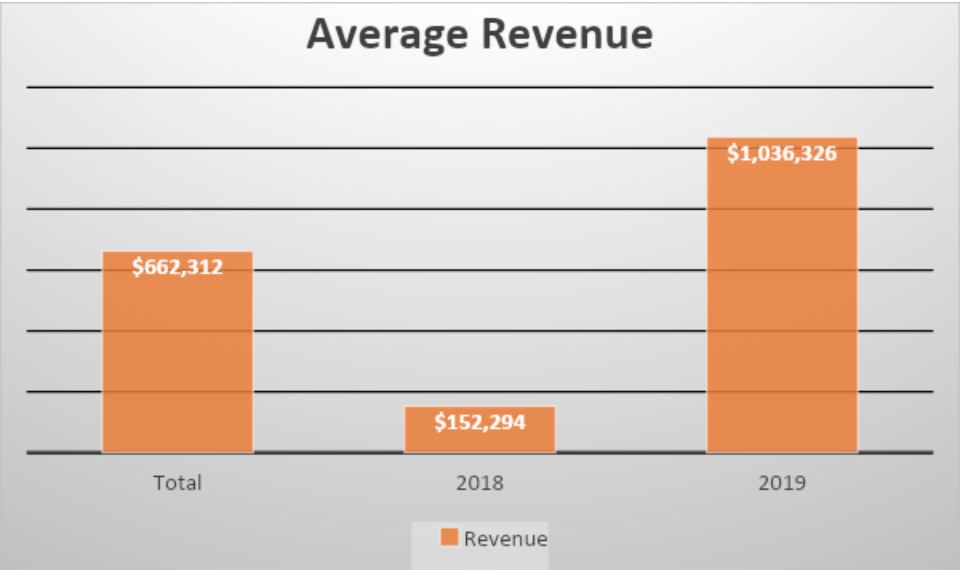 Some Sports firms KingsCrowd is looking at:

CricClubs – A Deal to Watch

This Chart of the Week examines how the Regulation Crowdfunding… ...