Platform where customers get rewarded from referrals

SideHustle App, with a valuation cap of $3 million, is raising funds on WeFunder. The application allows small and medium businesses to reduce their digital advertising costs and showcase their products and services through the app at no cost. On the other hand, the buyers save money and earn money by referring the deals through word of mouth. SideHustle App was founded by Alex Kabir in 2019. The current round of crowdfunding has a minimum target of $50,000 and a maximum target of $300,000, and the proceeds will be used towards salaries, sales and marketing, and working capital. SideHustle App has already had 266,000 downloads to date and is naturally viral. Additionally, the business of the SideHustle App is agile and globally scalable.

The SideHustle App team has been selected as an “Underweighted Deal” by KingsCrowd. If you have questions regarding our deal diligence and selection methodology, please reach out to hello@kingscrowd.com.

More and more, people are finding themselves either self-employed as part of a small business or working in the gig economy. This form of employment can create opportunities as well as the kind of flexibility that many individuals crave. However, finding quality-paying work in this disparate market can be challenging. One strategy employed by these participants has been to utilize leads. The problem, though, is that the traditional system of paying for leads irrespective of whether they work or not can do more harm than good. They entrench established market players while proving costly for those who need them the most.

When you really boil it down, SideHustle App aims to solve two problems. The first of these is to create a new and valuable way for companies and individuals to advertise. The second is to connect gig economy and small business participants with work opportunities. Both of these are accomplished through the company’s mobile app, which is available on both iOS and Android.

Users create an account on the app. They then have the ability to search for jobs. They can either create a posting for their own work, or they can search for others to perform work for them. Examples of tasks range from hair styling to baby-sitting and more. This feature alone is not unique and can be found on many different platforms like Angie’s List. What is unique, though, is how the company works to create leads around this service.

A big part of the app is the ability to refer jobs to others on the platform. Instead of charging advertising fees to most of the companies on the platform, management relies on referral postings, which are similar to leads. However it is only once a sale has been verified that the monetization for all parties involved comes into play. Then and only then with the person making the reference receive a financial kickback as a result of enabling the sale. This kickback can range from a few dollars to $1,000 or more.

As of this time, management has identified a few ways to generate revenue. The first is through a fee that they charge for advanced placements of deals. The second is through affiliate marketing, where a firm can advertise on behalf of its partners in its partners section of the app. In addition to these methods, the company takes a small (but unspecified) percent of the deal fee for any sales that take place through the app.

SideHustle officially launched its beta form toward the end of May last year. Since then, the company has had really attractive traction from a user perspective. Through January of 2020, the business saw 266,000 downloads of its app take place. About 23,000 of these are from businesses. Through the platform, an impressive 55,000 deals have been referred. While the company does well in user count, though, it has not done well from a financial perspective. Through the end of 2019, the business generated revenue of just $26,316. Its net loss over that period was $31,428, but it did manage to see positive operating cash flows of $1,925.

Management at SideHustle really stresses one key market for the company’s operations: digital advertising. They are spot on about that opportunity. According to one source, just in the US alone, digital advertising has grown from $43 billion in 2013 to $108 billion by the end of 2018. Over this timeframe, the desktop share of advertising has declined. Overall revenue in this category has leveled off at around $38 billion annually. The real growth has come from the mobile side of the equation. Back in 2013, mobile advertising was just $7 billion in size. By 2018, it had grown to $70 billion for an annualized growth rate of 58%. 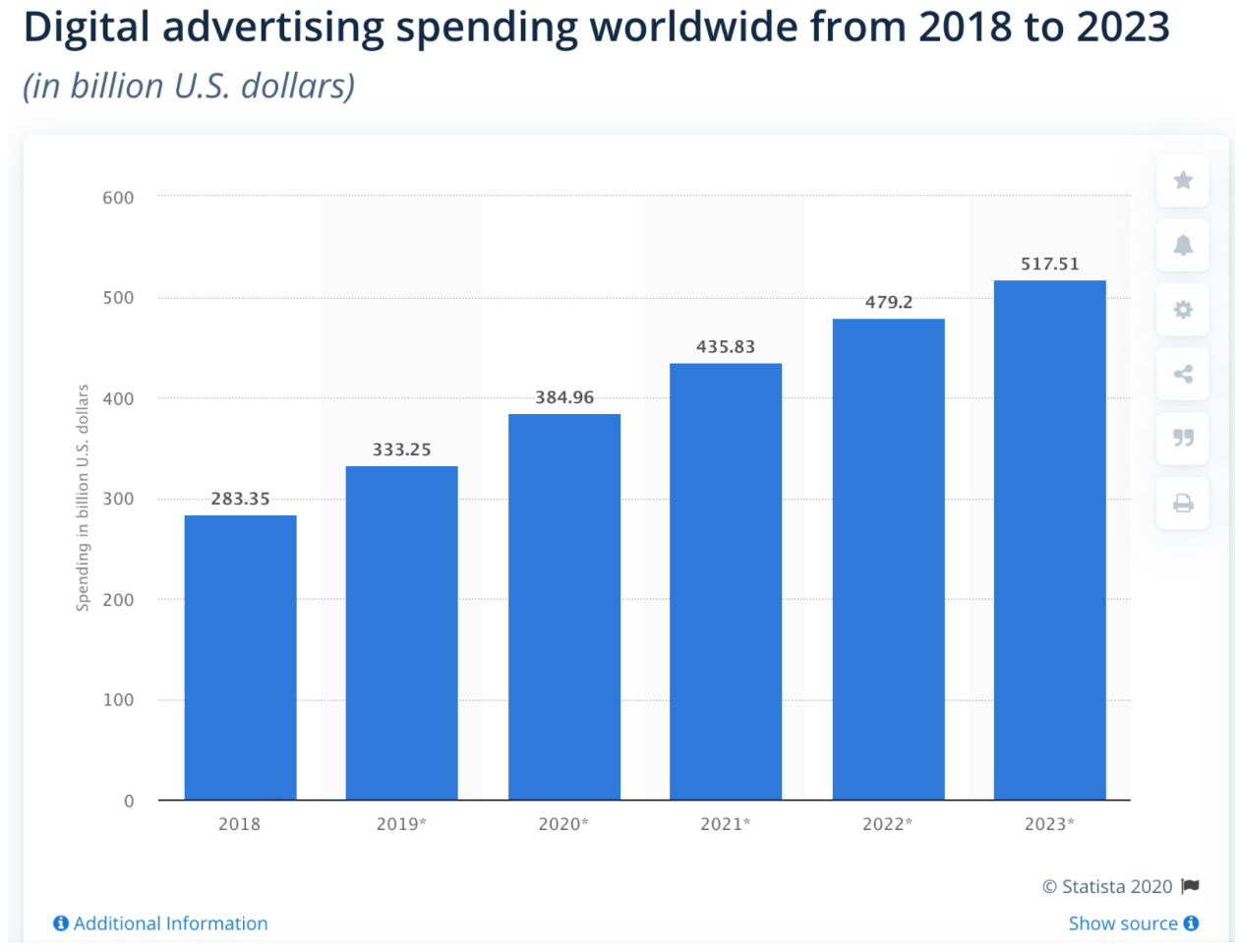 Outside of the US, the market gets noticeably larger. According to one source, the global opportunity for digital advertising this year is $374.16 billion. Another source pegs the number even higher at $384.96 billion. According to it, through 2023, we should see annualized growth of 10.4%. That would place the opportunity then at $517.51 billion. A breakdown of desktop vs. mobile was not offered here, but it’s safe to assume the same trend that has dominated the US market will probably extend elsewhere to varying degrees. 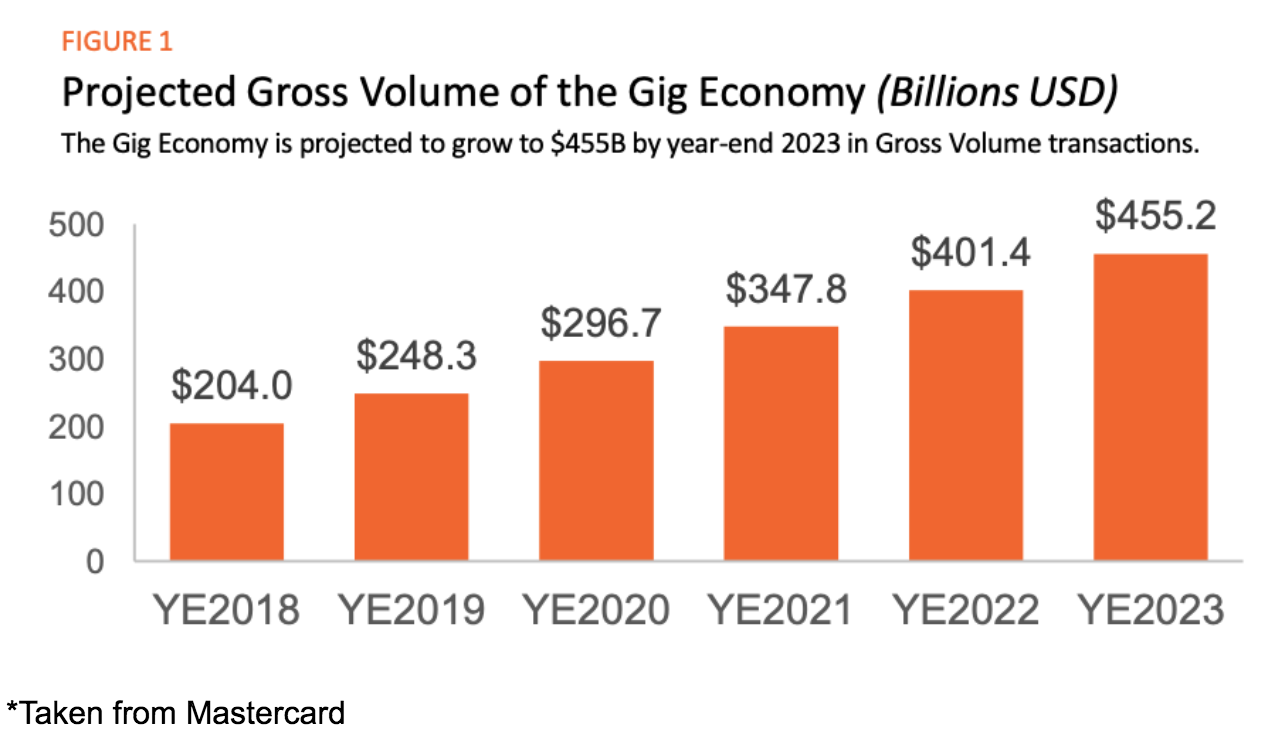 Another market that SideHustle operates in, but that they almost ignored in their filing is the gig economy. According to a report by Mastercard, the global gig economy back in 2018 was worth about $204 billion as measured by gross volume. The expectation is for the space to grow at a rate of about 17% per annum. If this comes to pass, then by 2023 it should be about $455 billion in size. What’s more, an estimated 44% of the market resides in the US. It is important, though, to keep some considerations in mind. Just because a market exists doesn’t mean that it’s a space that SideHustle can dominate in. 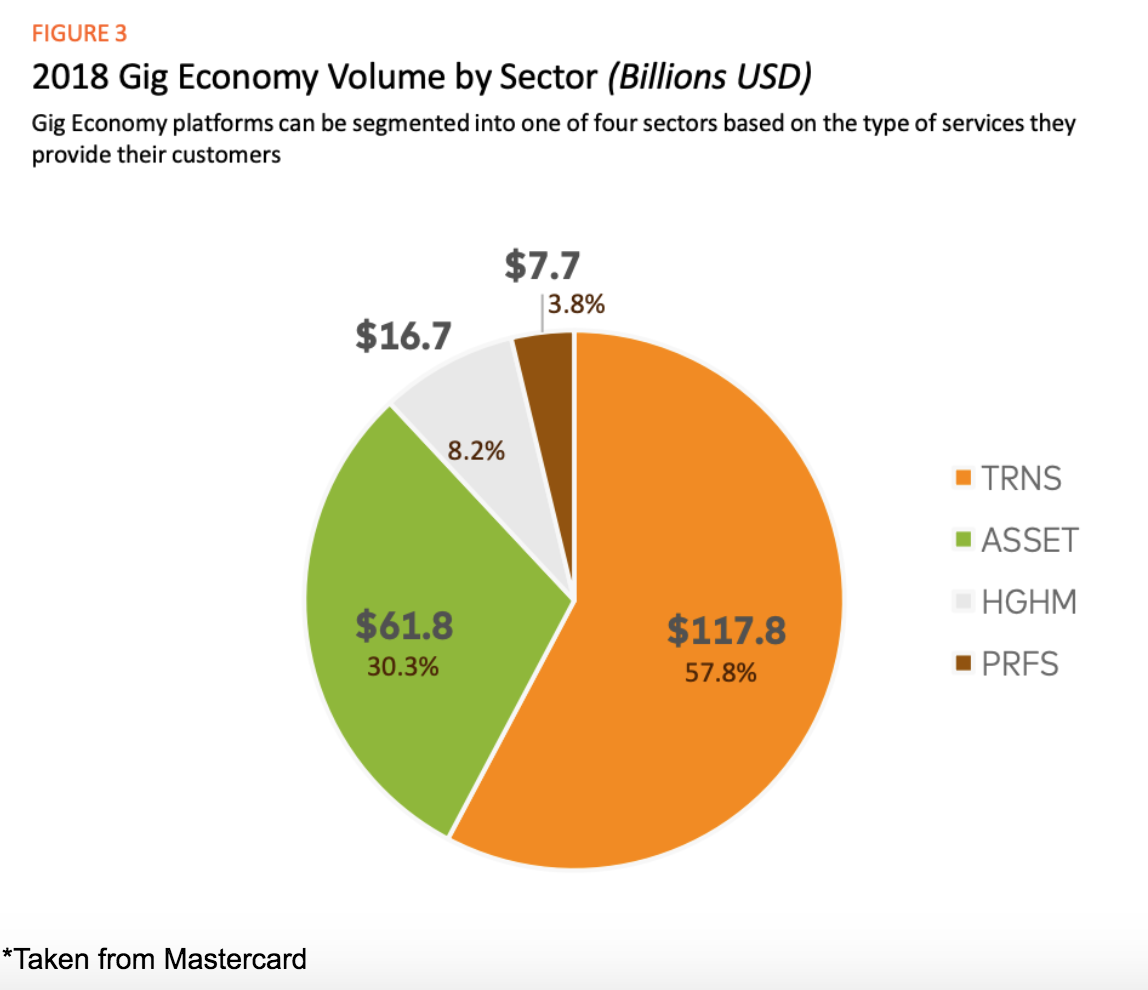 Consider, for instance, that 57.8% of the market opportunity in 2018, or $117.8 billion, was dedicated to transportation-based services, which largely relates to ride-sharing. Given the strong presence of firms like Uber and Lyft, it’s unlikely that SideHustle can do much here. Even so, there might be some niches in the market they can focus on. Another large share is asset-sharing, which makes up 30.3% of the market, or $61.8 billion. Once again, this is a space controlled in large part by well-established firms like Airbnb.

SideHustle may be able to work better with the smaller pieces of the market. One of these is the Handmade Goods, Household and Miscellaneous Services market. This sector made up about 8.2%, or $16.7 billion, of the space. The Professional Services market, then, made up the rest with a 3.8% share worth $7.2 billion. Just like the larger spaces, these segments are also due for attractive growth over time. The Professional Services market is forecasted to more than double to $17.4 billion by 2023, while the other niche should grow to $29.8 billion in size. This growth creates plenty of fertile ground for SideHustle.

In order to continue pushing on with the ambition to grow the business, management is hoping to raise up to $300,000 in a capital raise. They will, however, be able to close with as little as $50,000. In exchange for capital, starting with a minimum per participant of $100, the company is issuing SAFEs. These will convert upon the next round of funding, subject to a 20% discount on the firm’s future valuation and subject to a valuation cap of $3 million. For the first $100,000 committed to the raise, though, this threshold has been set lower at $2.4 million. As of this writing, management has seen commitments made worth $47,580.

Most management teams of startups have full bios on their social media accounts, but the same cannot be said of the SideHustle team. The firm’s CEO, Alex Kabir, has essentially nothing of value on his LinkedIn account, nor on his company’s filing page. Tom Seidel, SideHustle’s Director of Marketing, isn’t much better. He has no work experience listed, but he does have some educational experience, including a B.S. in Business Administration and Management at California State Polytechnic University at Pomona. Fortunately, Shawn Usmani, the business’s CTO, has something of relevance on his accounts. He currently also serves as a Director of Marketing at Omni Integration. He has also served as a Senior Technology Manager of Client Payment Systems at NCR corp.

Given that the founders and core team of a startup are exceedingly influential in the company’s success, it is not reassuring that so little can be found about SideHustle’s team.

After a careful review of the opportunity SideHustle appears to offer, our team has decided to rate it an Underweight prospect. On the positive side, the company has some great traction regarding downloads and usage. They also have an interesting take on the advertising / lead generation space. This model suggests some potential, as does the fact that both of its markets are large and growing at a nice clip.

On the downside, though, you have a great deal to worry about. The company’s paltry revenue in 2019, especially when you consider the number of users on its platform, is discouraging. Yes, the valuation of the business upon conversion is low. That’s attractive, but this is undermined by the lack of relevant information about its top brass. Another big concern is that while the company’s take on leads is different and appealing, success for the platform will be contingent on high volumes of users procuring goods/services through the app. High volumes have already been seen, but not high enough to generate significant revenue for the enterprise. In its current form, SideHustle does not appear to be a strong investment opportunity.

Thank you for your vote on SideHustle App Inc on Wefunder

Thank you for your vote on SideHustle App Inc on Wefunder