Solo Founders Are Still the Most Common - KingsCrowd Skip to content
Become an owner of KingsCrowd.
Invest Today!

Solo Founders Are Still the Most Common

If you are familiar with early stage investing, you may have heard the adage “invest in the team.” Understanding how to evaluate a company’s leadership is crucial to making an informed investment decision. The importance of team is why our startup rating algorithm takes so many data points on the founding team into account. These factors include the industrial and entrepreneurial past experience of founders, the presence or absence of complementary skill sets, and if founders have any prior exits. 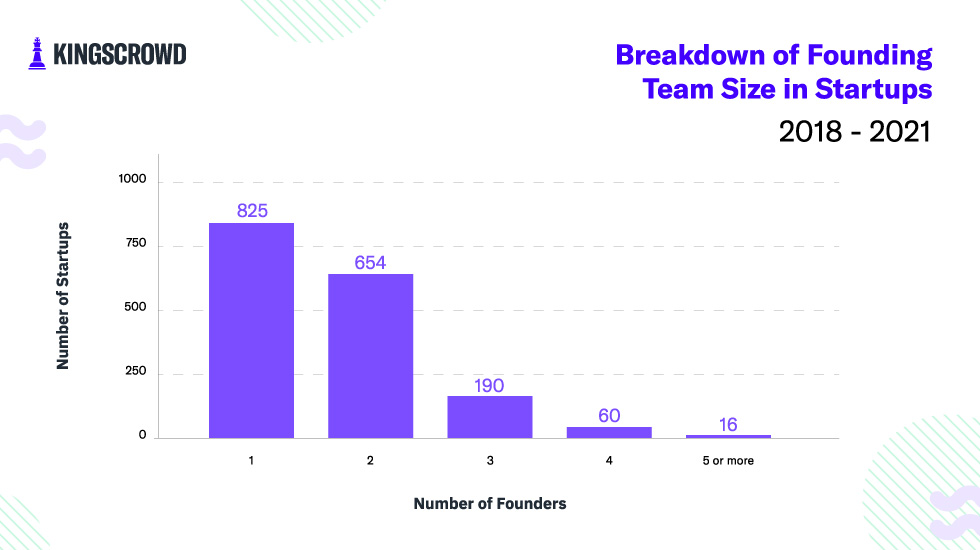 Debate surrounding the optimal headcount for a founding team is ongoing. There is no definitive answer on the perfect number of founders. Many venture capitalists seek to fund founding teams of two or three due to the risk involved of having a single founder or more than four. A single founder could find themselves making decisions without outside input or perspectives. Such centralized decision making may not always be in the best interest of the company. Additionally, should the founder leave the company for any reason, it is questionable if the startup will be able to survive. Founders are often seen as providing the driving force and vision, so losing a founder has a deep effect on a startup. Alternatively, having four or more founders could result in a lack of efficiency when it comes to problem solving or decision making. The more people involved, the more difficult it can be to reach a unified vision.

Despite the advantages to having two to three co-founders, single founders could have good reasons for launching a company solo. For example, it is often hard for founders to find like-minded individuals that are equally as passionate about their product or service. Founder chemistry has a huge impact on the success of a company despite being intangible. Many solo entrepreneurs choose to bring on advisors or board members to fill the intellectual or advisory role of a co-founder without overstepping.

Regardless, founder count is definitely something to consider when making an investment in the online private markets. While there is no right or wrong answer when it comes to head count, becoming familiar with the composition of a founding team is a crucial part of due diligence.

We have compiled all the KingsCrowd Deals to Watch, Neutral… ...

We break down the latest RegCF deals available as of… ...