2022 has been a year of economic struggles. The Dow Jones is down 8.2% year to date, and the Nasdaq is down a painful 28.9% for the same period. The Federal Reserve has hiked interest rates by 2.36 percentage points this year alone. (That’s the fastest rates have ever risen in recent history.) And the Fed isn’t done yet. Many investors and economists are concerned that a recession is on the horizon.

With so much uncertainty, how have the private markets fared this year? Traditional venture capital (VC) has seen a major decrease in the amount of dollars invested when compared to 2021. And while we might see online startup investing dollars drop this year as well, VC is set to shrink even more.

Still, dollars invested isn’t the only important metric to assess when judging a market’s resiliency. Deal flow — the amount of investment opportunities that are available — is another important indicator of health when it comes to startup investing. And compared to VC, online startup investing is still a young market. This is the first time the online private market has experienced a tumultuous economy. So while dollars invested is dropping slightly, how is deal flow shaping up in 2022? 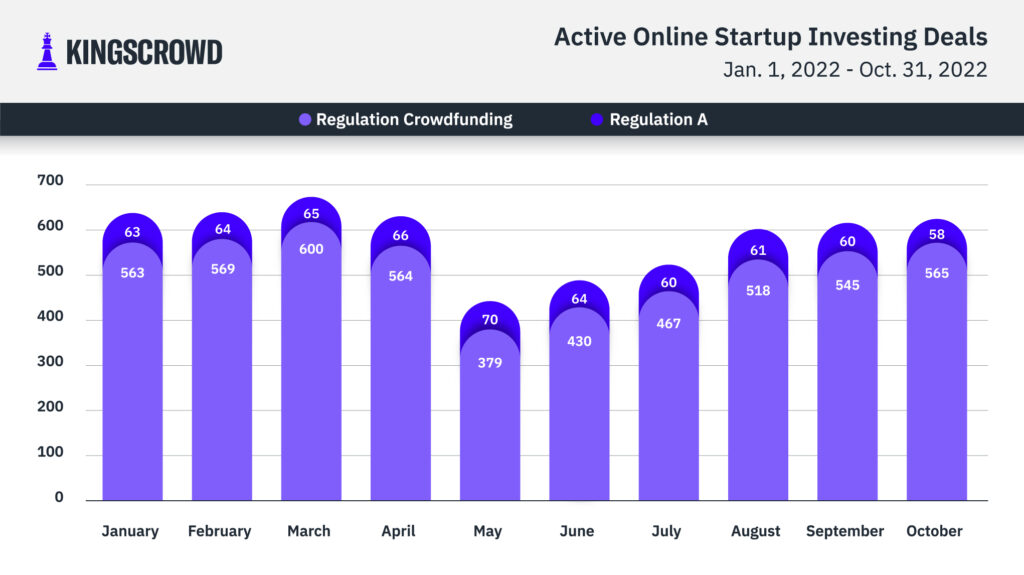 At first glance, it’s clear that the flow of active Regulation Crowdfunding (Reg CF) deals held steady through April before dropping substantially in May. While that may look like it’s tied to economic woes becoming more apparent at the beginning of summer, we regularly see a drop-off in deals between April and May. Reg CF raises that open between January and April of a new year don’t have to supply financial figures for the previous calendar year. But deals that open from May onwards do. So a Reg CF raise that opens in April 2022 can supply financial figures from 2019 and 2020 for its two most recent fiscal year financial reporting, but if it opens in May, it needs to provide 2020 and 2021 numbers. And that requirement leads to fewer Reg CF deals coming in each May. We’ve seen this trend happen multiple years in a row. Overall, Reg CF deals look to be recovering from their summer drop and are returning to previous activity levels.

But keen-eyed readers may notice that Regulation A (Reg A) raises held extremely steady throughout 2022. And this deal flow is a continuation of growth we saw start last year. The average number of active Reg A deals in any given month of 2021 was around 50. In this year so far, that average is up to 63. Reg A deals are showing major resiliency, despite economic struggles. This behavior isn’t too surprising. Generally speaking, startups that are able to pursue Reg A raises are more mature and further along in development than the ones we see in Reg CF. Reg A raises also require significant time and planning commitments from founders and startups. They can take months — possibly more than a year — to create and launch. With so much thought and effort, it makes sense that these startups are determined to see their Reg A raises happen. And that’s good news for investors!

Looking at deal flow in a turbulent year like 2022 can give startup investors insight into the market’s resiliency. This year has been a big test for online startup investing. And it’s passing the test with a pretty good grade! A slight pullback in Reg CF deal flow isn’t surprising — we’ve seen similar behavior in total dollars invested. But the clear upward trend of Reg CF deal flow indicates confidence from founders and recovery in the overall market. Plus, the fact that Reg A raises were impacted so little is something investors should not ignore. Assuming that kind of activity continues, investors may want to look to Reg A deals in times of economic downturns. Steady deal flow provides better chances for finding high-quality investment opportunities.

Chart of the Week – Funding Status By 2020 Staff Picks

In this KingsCrowd chart of the week, we look at… ...

The latest 27 online equity crowdfunding deals from across 20+… ...

Plant-based foods are a growing consumer trend across the globe. ...