Solution for the visually impaired

Sunu is raising funds on Republic via Crowd SAFE with a $12 million valuation cap. The team has created wearable technology for the visually impaired. The smart band has sonar obstacle detection, as well as GPS navigation, empowering the visually impaired to be more independent. The band uses sonar or echolocation technology to detect objects up to 16 feet away. The team has raised $870k to date and is backed by Y Combinator, among others. The minimum investment amount for Sunu is $100 and the minimum target for the round is $30000.

Sunu has been selected as a “Top Deal” by KingsCrowd. This distinction is reserved for deals selected into the top 10% of our due diligence funnel. If you have questions regarding our deal diligence and selection methodology please reach out to hello@kingscrowd.com.

There are varying degrees of visual impairment, ranging from minor sight issues to complete blindness. Besides costly surgery (which is not always an option), sometimes the best aides are seeing-eye dogs and probing canes. Even in these cases, though, the visually-impaired are left with few means that materially improve their wellbeing. One company set up to address this is Sunu. The firm, founded by Marco Trujillo and Dr. Fernando Albertorio, has created a sonar-based technology to help the blind and visually impaired.

Visual impairment is a significant issue across the globe. According to the World Health Organization (WHO), there are 2.2 billion people around the world with visual impairments. Many of these cases can be treated with straightforward solutions like glasses or contacts. Tens of millions of cases, however, involve either severe impairment or outright blindness. Addressing this issue is not only a market opportunity; it’s a social mission that can better countless lives. 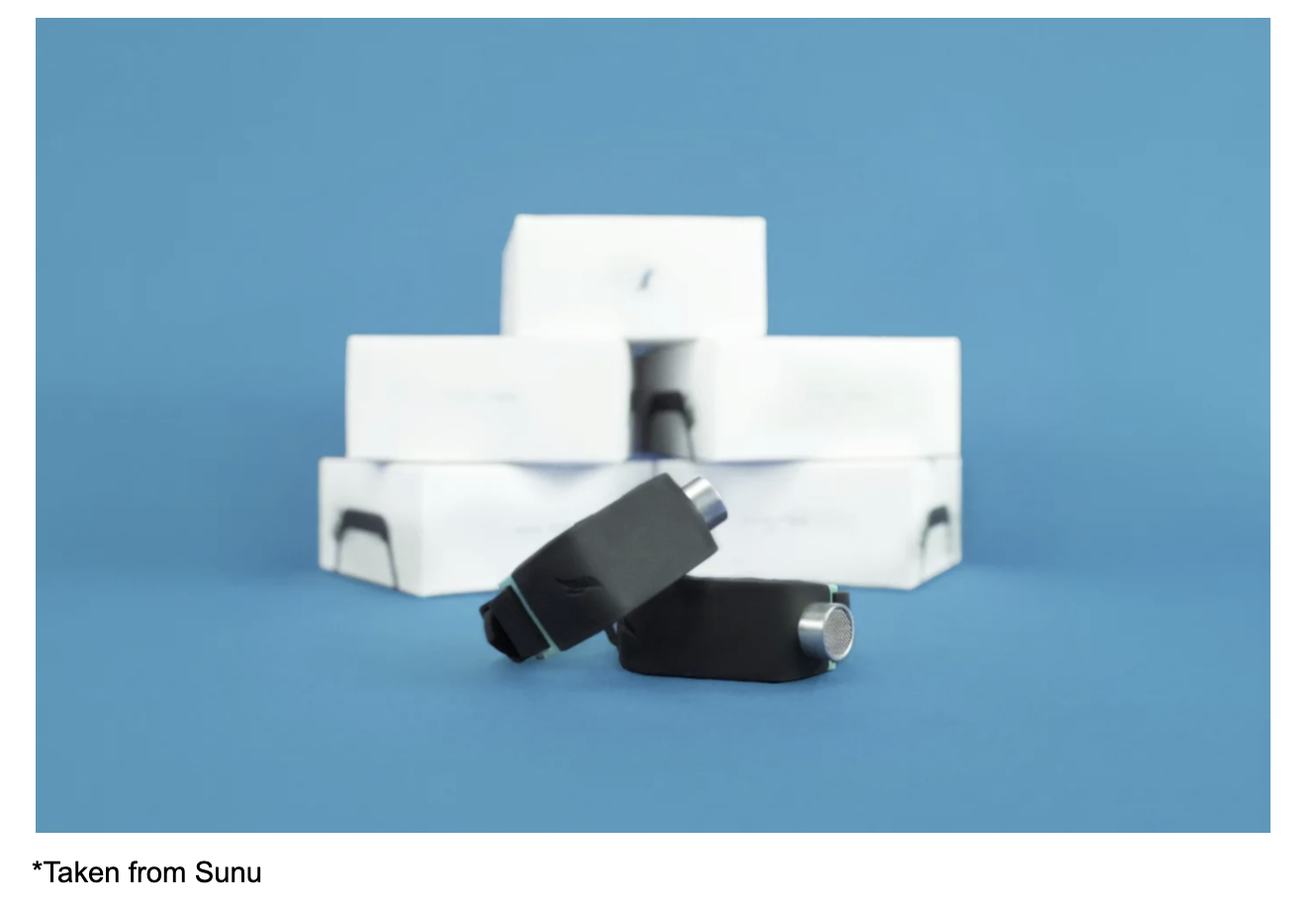 Recognizing the impact that visual impairment has on individuals, Trujillo and Dr. Albertorio set out to create Sunu. The company’s signature Sunu Band fits on a user’s wrist. Once activated, it utilizes sonar or echolocation technology to detect objects up to 16 feet away. Using haptic vibration, it informs the user where an object is so that they may avoid it or interact with it. The team stresses that this is not a solution for every situation, though. Probing canes are still excellent for detecting obstacles and objects at or around foot level. The Sunu Band, though, is ideal for locating them between the user’s knee and head. 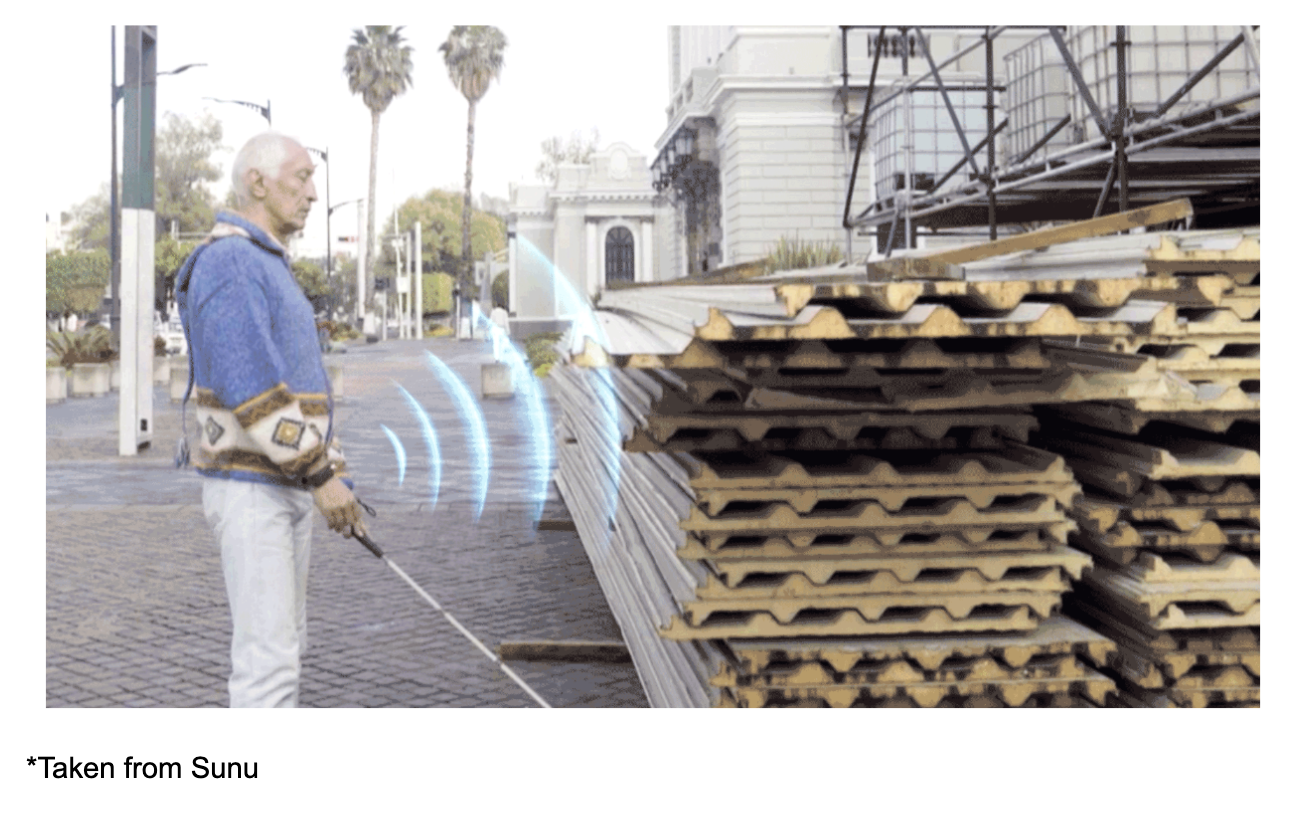 The Sunu Band does not operate in isolation. The company allows the device to connect to the user’s app. This gives users the ability to access location information from the smart band. The user, then, can use that technology to identify nearby places like streets, intersections, restaurants, and more. Using GPS technology, its PlaceFinder search function, and augmented reality, the Sunu Band can direct its users to most any place they wish to travel. It’s also great for users across the globe because its app has been translated into more than 30 different languages. According to management, the Sunu Band has been successful in reducing accidents by 90%. In the image below, you can see that some competitors do exist. That said, Sunu’s value proposition is clear. The company is positioning itself as a competitively-priced, comprehensive offering. 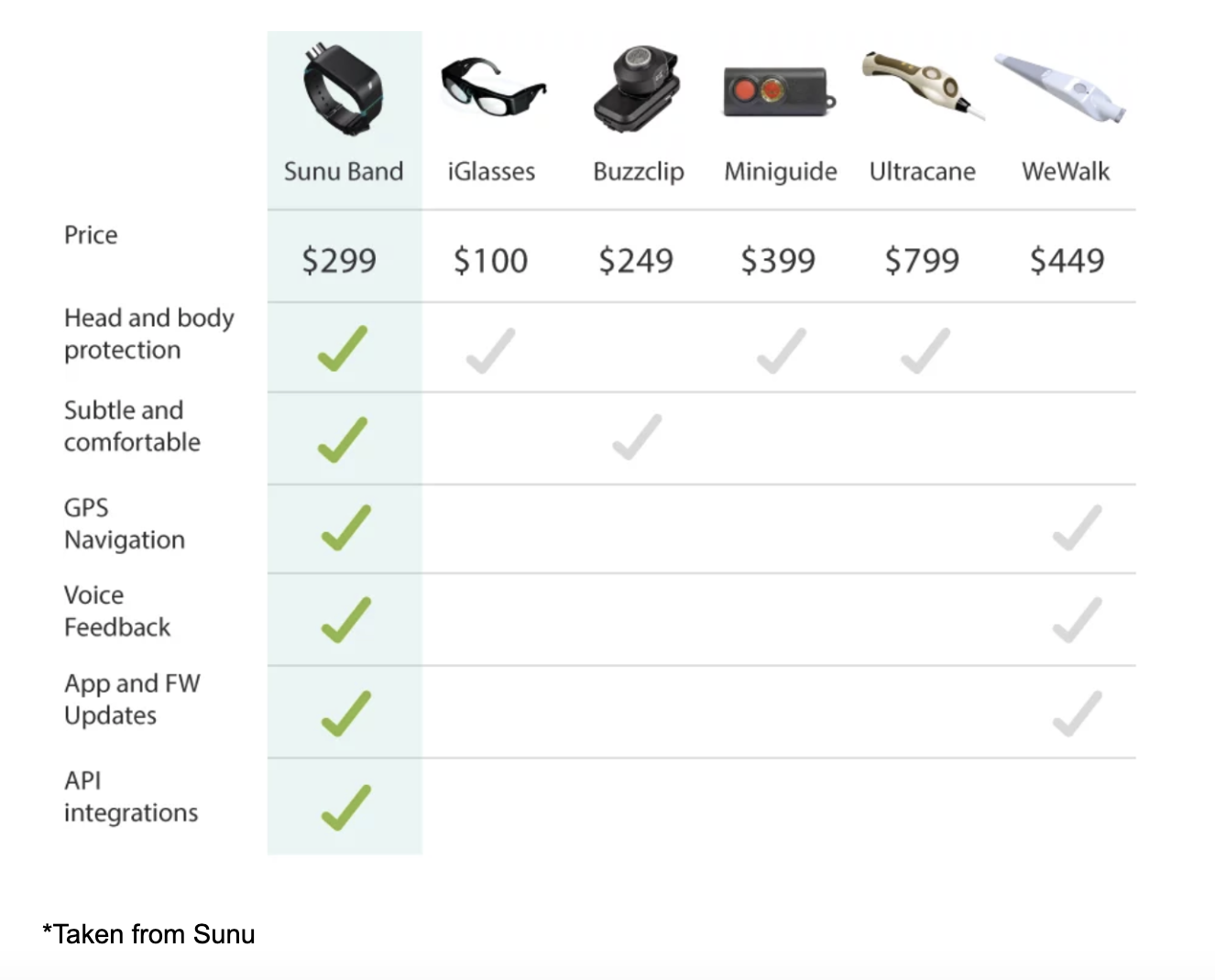 Moving forward, management has big plans for the brand. They are working on creating a system that crowdsources information and reviews for the visually-impaired. The company also hopes to gamify and create rewards around specific activities and locations. The company is currently developing its next-generation product: the Sunu Band X. This device will include more advanced sonar detections and improved haptic communication. It will integrate three times as much information as the current model, including audio feedback. Also, later in the year, the company will be working on its Sunu Nek. This device, when worn around the neck, will use audio, optics, and other sensors to provide a 360-degree ‘view’ of the users’ environments. 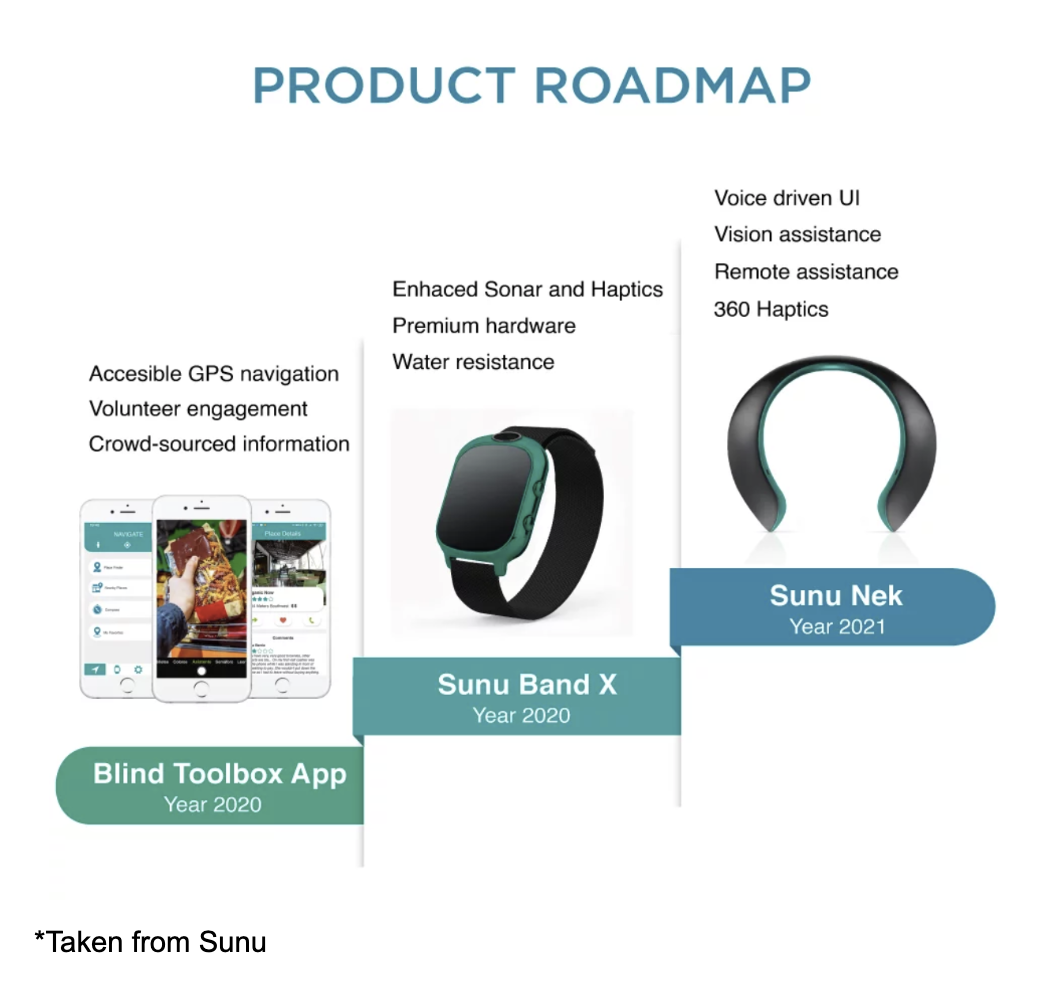 While pricing has not been released for its future products, the original Sunu Band is on the market today. They can be purchased for $299. The company claims the cost of production stands at just $60. Add in a customer acquisition cost of between $30 and $90 per unit, and each one should generate a profit of between $149 and $209. Some countries, like the US, Norway, and Australia, currently make the device even more affordable by making it eligible for medical subsidies. The company also intends to launch a premium subscription service soon as well. This could prove to be a boon for investors because it could leave them with a steady, high-margin stream of income for the long-haul. 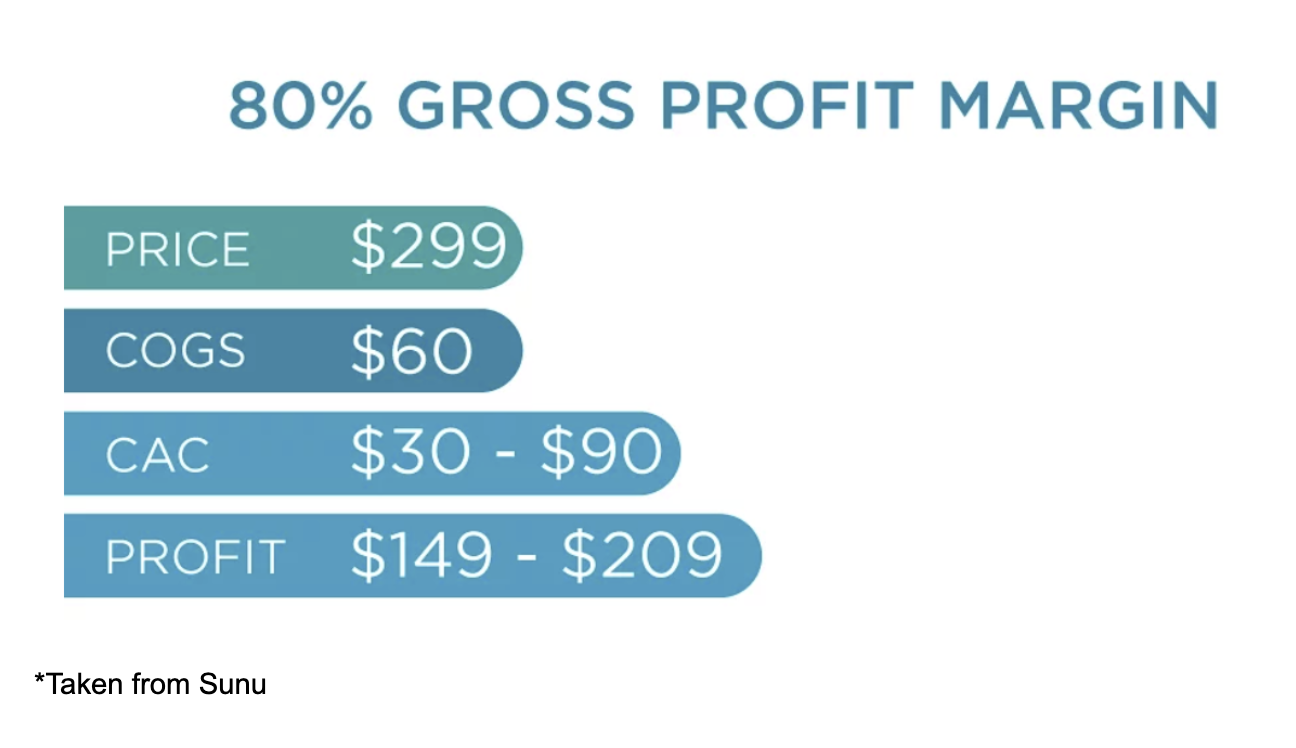 Visual impairment is a global phenomenon, and management understands this. Because of this, they have been very active in growing the company’s presence overseas. Today, the Sunu Band is available in 28 different countries. The company sells it through a network of distributors, rehab centers, and vision clinics. This has not stopped it from reaching other parts of the world, though. Management claims to have nearly 5,000 users spread across more than 50 countries. It also sells its product directly to consumers online and at expos. 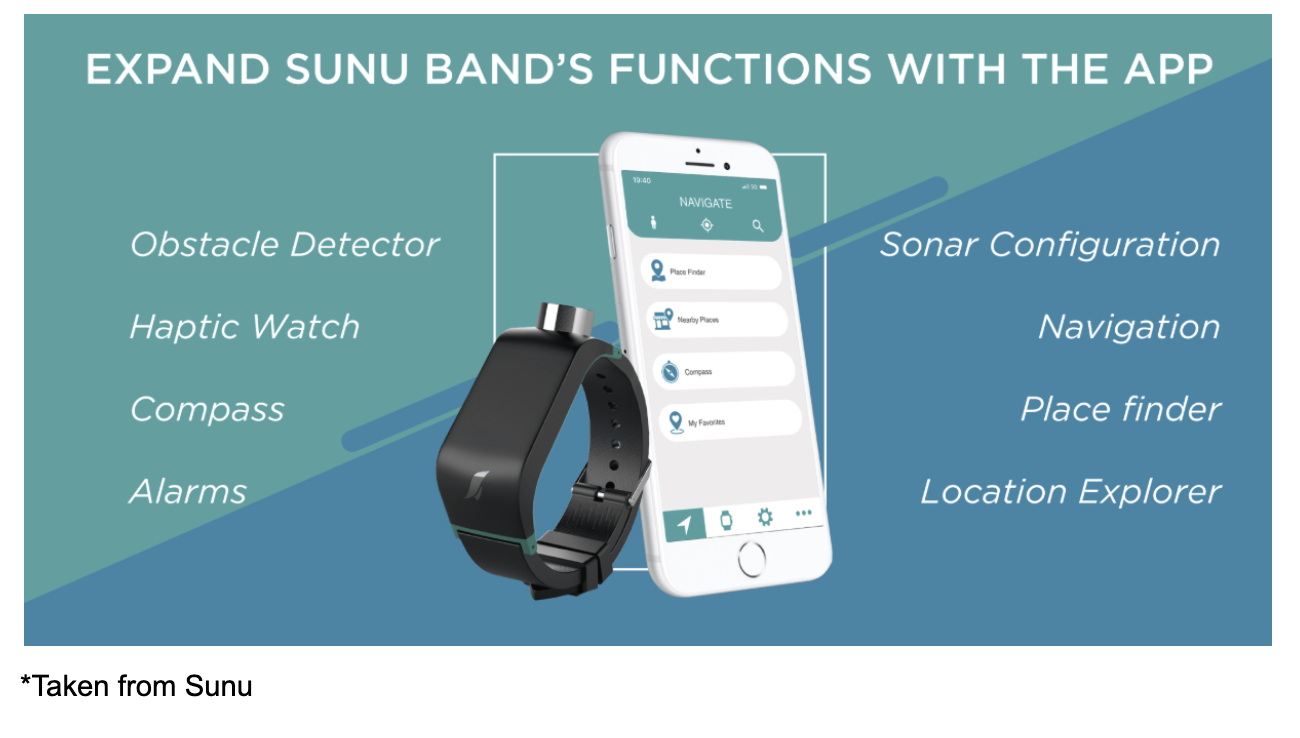 The management team at Sunu cited a WHO report claiming that there are 285 million individuals in the world with visual impairments. Of these, 39 million are legally blind, and a full 80% of visual impairment cases are considered preventable. While this alone denotes a vast market opportunity for shareholders, the report Sunu cited is from 2010. Since then, data has become more thorough, and the WHO has revised its view of this condition. A more recent report, published in October of 2019, suggests that there are 2.2 billion people in the world with some degree of visual impairment. Of these, 1 billion could have been prevented, or their issue has yet to be addressed.

It’s important to put this data into context, though. Not everyone with a visual impairment can or will benefit from Sunu and its technology. Most individuals can be treated with glasses, contacts, laser eye surgery, and/or other means. The real targets of Sunu’s offerings will be those suffering complete blindness and those with moderate to severe visual impairments. A study, published in 2017 estimated that the number of individuals in the world (in 2015) with a moderate to severe visual impairment was 216.6 million. Given the range of uncertainty, this figure could be as high as 359.1 million or as low as 98.5 million. The report also estimated that there are 36 million individuals in the world who are legally blind. This is up from just 30.6 million back in 1990.

In addition to the aforementioned report, BBC News ran an article on blindness back in 2017. The organization concluded that the number of blind individuals would rise from 36 million back then to 115 million by 2050. Over the same period of time, the number of individuals with moderate to severe visual impairments should grow. The expectation is for this figure to expand from 200 million to around 550 million. In Asia alone, it’s believed there are 21.4 million blind individuals. And in the US, it’s estimated there are 26.9 million adult Americans who are blind or who have trouble seeing even while wearing glasses or contacts. Another source suggests the number of blind individuals in the world stands at 45 million. The number of those impaired, according to that same source, is about 314 million.

Technology is not adequately addressing this crisis fast enough, making it a prime opportunity for players like Sunu. According to one source, the global market for assistive technologies for the visually impaired stood at about $3.5 billion in 2017. It’s believed this market will grow at a CAGR of about 8% through 2026 when, in that year, it will reach $6.98 billion in size. Another source believes that the space will continue growing at a rate of 8.8% per annum, from 2019 until 2025, when it reaches $6.11 billion in size.

The Sunu team is raising via Crowd SAFE. In exchange for an investment of at least $100, investors will receive the right to receive equity in the company upon an eligible equity raise. Their ownership will be based not only on how much they invest but on the valuation, the company receives at that later time. The SAFE stipulates a valuation cap of $12 million, with the SAFEs converting at a 20% discount. In all, the firm is hoping to raise up to $1.07 million from this transaction, but it can close a round with as little as $30,000 committed. As of this writing, the company has $11,000 committed to its round.

There are, at this time, two key members of the Sunu team: CEO Marco Trujillo and CTO Dr. Fernando Albertorio. Trujillo advertises himself as the inventor of the Sunu Band, as well as of five other assistive devices. He was designated a Social Innovator of the year by MIT Tech Review. He also has 10 years of robotics experience in hardware design and manufacturing. Dr. Albertorio, meanwhile, is a legally blind technologist and serial entrepreneur. He has experience with Y-Combinator, TechStars, and MassChallenge as an alum. He graduated from Harvard University with his Ph.D. in physics and is a member of the board of directors at MABVI.

Sunu is a fascinating company with a compelling vision and an exciting line-up of products just around the corner. After careful evaluation and consideration, the firm has been ranked a “Top Deal” by our team. The firm is addressing a significant market with a product that appears to stand head-and-shoulders above the competition. Its growth rate over the short time it has been alive has been impressive. Its ability to expand internationally in such a small timeframe, as well, is amazing. The fact that the company’s product is available for medical subsidies in at least three countries (especially the US) is a nice cherry on top. On top of all of this, its top brass is the kind of team you would want from a firm of this nature. Revenue growth appears to be strong, though the company must someday move toward profitability if it wishes to be sustainable.

This does not mean that there are no risks, though. Competition in any space is fierce, and the firm must contend with players who have been around for a while. Its $12 million valuation cap seems pricey. If, however, the company can scale and achieve profitability with its future offerings, this may not be unwarranted. The modest amount of debt on its books is also encouraging since the risk of the firm being taken over by creditors appears limited. On the other hand, until the business can achieve a greater scale, it will continue to hemorrhage cash, which opens the door to future dilution. In all, though, the upside of the firm appears to be impressive.