The Surprising Truth About Long-Term Debt

“Debt” can be a scary word for just about anyone. But as a startup investor, debt can be a welcome metric to evaluate the potential of an early-stage company. Long-term debt in particular is one of the first financial metrics I consider. It can help investors gauge a company’s general financial health, solvency risk, and how far its cash might stretch. Before we dig into the Chart of the Week, let’s look at what long-term debt is.

Startups using Regulation Crowdfunding to raise capital have to split their debt into short- and long-term. Short-term debt needs to be settled in a year, and long-term debt refers to debt that “matures in more than one year.” Growing a company from scratch takes a lot of capital, so it’s normal for startups to take on long-term debt. Companies can use debt to support research and product development, payroll, legal fees, marketing, and equipment while they are still pre-revenue. For some companies, achieving revenue takes years.

This week, I took a look at average long-term debt across different product types: software, hardware and consumer packaged goods (CPG), service, and pharmaceutical. And I was pretty surprised by what I found. Initially, I expected hardware and pharmaceutical companies to have the most long-term debt. Due to inventory needs and cost of goods sold, hardware-focused startups are often quite capital intensive. Similarly, pharmaceutical companies often spend years in research and development. They often need a lot more time to bring products to market and generate revenue due to regulatory hurdles. Funding clinical trials and iterating on a product would force companies to take on large amounts of debt. I assumed that keeping up with payroll and other expenses throughout the pre-product years would result in long-term debts for pharmaceutical and hardware startups. But that’s not what our data shows. 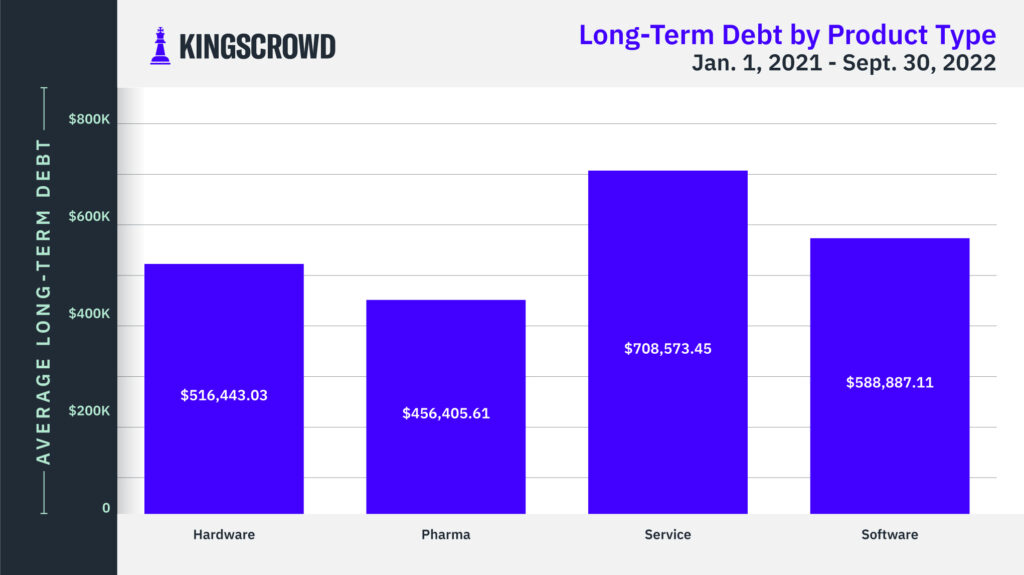 I have a theory as to why my initial assumptions were so off. And I think it has a lot to do with the nature of the online private markets. Online startup investing is commonly used by very early-stage startups, often as one of the first rounds of funding. These raises can occur within a year or two of the company’s inception. And across the different product categories, company growth in those early days likely varies significantly.

Service-based startups had the highest amount of long-term debt on average. I think this is probably because they burn a significant amount of capital on payroll. Human resources can be very capital intensive, making this result less surprising than software surpassing hardware.

If long-term debt is something that you weigh as an investor, it may be worth examining it through the lens of product. And this data shows that our base assumptions aren’t always proven by what is actually happening in the market. That’s why I would encourage you to challenge assumptions and look at the online startup investing ecosystem as a whole. This practice has made me a more informed investor and pushed me to think deeply about the nascent and exciting world of the online private markets. Happy investing!

The SEC has charged the founders of two startups and… ...

What is Angel Investing And How Does It Work?

Angel investing is the form of investment done by friends… ...

Tune In To Venture Unplugged

We sit down with the host of Venture Unplugged Mayra… ...