Thuzio, with a $7.5 million valuation cap, is raising funds on Republic. It is a sports events and media company that provides fans access to sports icons and their stories. The national event series of Thuzio features interviews with the athletes. The series will offer over 100 events to members across 12 cities in the US in 2020. Thuzio was founded by Tiki Barber, Mark Gerson, and Jared Augustine in 2012 and has raised over $3.2 million since its founding. The proceeds of the current round of crowdfunding, with a minimum target of $25,000 and a maximum target of $600,960, will be invested towards the content platform. Thuzio already has more than 200 corporate members, including seven banks and six consulting firms.

The Thuzio team has been selected as a “Deal to Watch” by KingsCrowd. This distinction is reserved for deals selected into the top 10%-20% of our due diligence funnel. If you have questions regarding our deal diligence and selection methodology, please reach out to hello@kingscrowd.com.

The sports industry is a large market with many facets to it, from large scale events to gear and equipment to advertising. However, one area that has not yet been developed is the opportunity for fans and athletes to connect and interact beyond the briefest of moments. An athlete’s time is expensive, and this high cost has previously prevented many fans from being able to get any closer than watching a game or a press briefing. These events lack the kind of two-way engagement that many fans crave, and athletes do not have the ability to share their interesting and unique stories.

To address these shortcomings, Thuzio came into being. The company can best be described as an event and media company focused on bringing athletes closer to their fans. Every year, the firm holds national events which feature live interviews with professional athletes. The focus is on getting them to share their values and how they apply to things like sports, business, and life. These are exclusive experiences open only to Thuzio’s clients, and they are held in upscale venues across the US.

In order to fund these events, the company offers a tiered membership structure. The firm’s website does not disclose all of the pricing options available, but management has given an upper and lower guidance. For individuals, membership starts at $2,000 per year. It grows to a high of $20,000 per year for enterprises. Each membership comes with a ‘block’ of tickets that grant users access to events. Individual tickets in these blocks are typically priced at around $200. The firm also generates revenue from sponsorships. Those typically begin at around $3,000 per event and they can rise to six-figure sums for annual arrangements.

Though the price to participate as a client with this company is high, it has done well to grow over time. According to management, Thuzio boasts more than 25,000 digital subscriptions. It also has more than 200 corporate member accounts, and in 2019 its events had more than 5,000 attendees. Thuzio’s service is targeted towards a very specific audience, as one might expect. The company has revealed that the average age is between 39 and 41 years old. Additionally, 75% of their clients are male, 40% are C-suite level executives, and the average annual income of a client is about $200,000. This income level, in particular, is a prime opportunity for many prospective advertisers.

In 2018, Thuzio generated revenue of $2.67 million. Although that figure is an excellent take for an early-stage firm, it is worth mentioning that it’s worse than what the company saw in 2017. That year, revenue was $3.21 million. Unfortunately, both years saw the company generate a loss. In 2017, its loss was $4.48 million, while its operating cash outflows totaled $4.27 million. In 2018, its net loss narrowed considerably to only $1.04 million, and its operating cash outflows were just $555,138. The company has not revealed official 2019 figures but did say that revenue was north of $2.5 million. While this suggests that revenue was probably down again, it did say that revenue per event was on the rise. In 2019, the company reported revenue per event of $29,283. This represents an increase of 8.5% year-over-year. Over that same time, its gross profit per event more than doubled from $4,469 to $10,209, suggesting that it is possible the company is nearing breakeven or even a state of profitability.

The outbreak involving COVID-19 brings to mind serious questions regarding what the firm’s 2020 fiscal year will look like. That said, the company’s plans, prior to the outbreak, were ambitious. Management expected to host more than 100 events across 4 new markets (Miami, Atlanta, Las Vegas, and San Francisco) this year. That expansion would bring the company to 12 markets, up from 8 last year. If all goes according to plan, the company plans to scale up to 300 events across 30 US and international cities by 2022. By that point, the company hopes that its average revenue per event will be around $100,000. Their goal is for half of that to come from event ticketing with the rest coming from sponsorships. Management forecasts a gross profit margin under this hypothetical outcome of 50%.

The sports market that Thuzio plays in (pun intended) is large, but it’s not growing at a particularly quick rate. According to PricewaterhouseCoopers, the North American market for sports was valued at $73.04 billion last year. Over the next few years, it’s expected to grow at an annualized rate of 3.2% until it eventually hits $83.10 billion in size. Of course, it’s important to know that not all aspects of the market will grow at the same pace. The media rights piece of the pie, for instance, will grow at an annualized rate of around 4.6%, while the gate revenue piece will grow at a slower 2.5%. Sponsorship opportunities, meanwhile, will grow at about 3.8% per annum, rising from $17.87 billion last year to $20.65 billion by 2023. 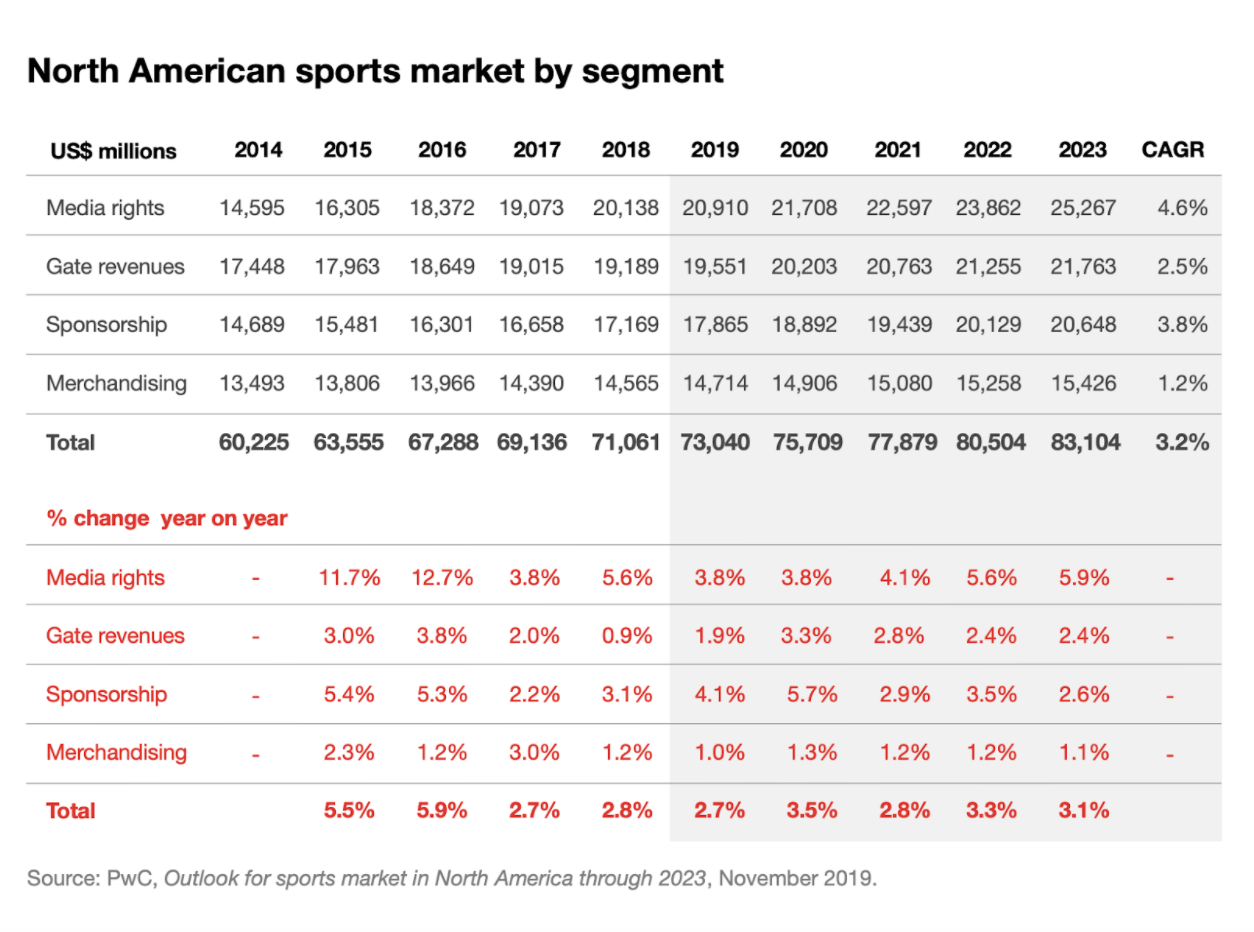 North America represents a significant opportunity for sports enthusiasts, but it’s not the only market to consider. According to another source, A.T. Kearney, the global market for sports is worth somewhere between $480 billion and $620 billion. That same source, though, pegs the US market at only $31.83 billion and global sponsorship at just $18.03 billion. The latter, in particular, seems awfully low since it would imply that nearly all sponsorship revenue comes from North America. 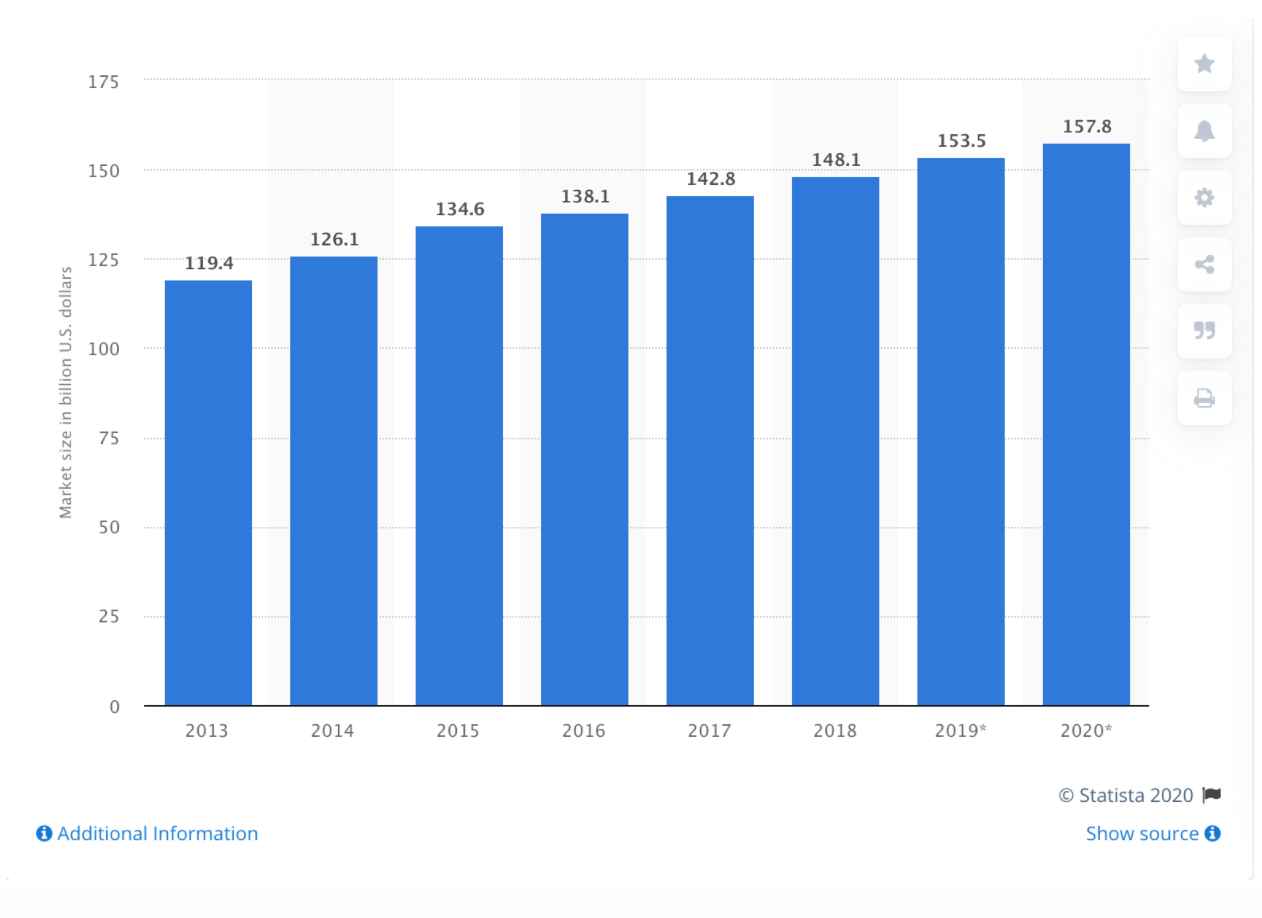 There are some other aspects of the sports market that need to be discussed. For starters, the sports analytics market is estimated to be worth about $2.3 billion and is forecasted to grow at a rate of about 22% per annum through 2024. Meanwhile, the global market for online event ticketing is estimated to be worth around $53.8 billion. The forecast there is for growth of 4.8% each year through 2025. Sadly, none of these figures touch precisely on what Thuzio is doing, but that’s because Thuzio’s business model is niche and largely untapped.

In order to stay afloat and to keep growing, the management team at Thuzio is hoping to raise additional funds. It just raised $1 million back in 2019. Now its goal is to raise between $25,000 and $600,960. This current transaction involves issuing a SAFE that will convert into equity subject to a $7.5 million valuation cap and a 10% discount, which is quite reasonable given the business’s revenue. The minimum investment required per participant is just $100, and the business has commitments as of this writing in the amount of $52,693.

There are several individuals working to make Thuzio a success, but three stand out as the company’s top brass. The first of these is Jared Augustine, the business’s CEO and one of its three co-founders. He was previously the founder of Julius Influencer Marketing, a marketing software company. He has also served as a VP of Sales at Group Commerce and as an Executive Director at Seamless.

Next in line is Mark Gerson, Thuzio’s Co-Chairman and one of its co-founders. He has and does serve on multiple company boards in the role of Chairman. In addition, he was a co-founder of Voray, as well as of Quality Review, Inc. Before that, he ran Gerson Lehrman Group, a professional education services company.

The last individual of note is Tiki Barber. In addition to being Thuzio’s final co-founder, he is its other Co-Chairman. He has worked as a co-host for a sports radio show for Entercom, and he is the Chief Business Development Officer for Grove Group Management. For nearly 10 years, he served as a Running Back for the New York Giants.

After a careful review, we have decided to rate Thuzio a Deal to Watch. The company’s business model is very intriguing, and the progress management has achieved to get this far is impressive. In addition to this, the company’s valuation appears modest compared to its sales and ever-improving bottom line. The fact that it operates in a large, multi-faceted industry with multiple additional revenue streams down the line is a significant plus for shareholders to consider.

The biggest issue facing Thuzio is its bottom line. While this has improved in recent years, the company can only generate losses for so long before it can’t go on any further. Add to this the fears over the impact that COVID-19 is likely to have on the business this year alone, and things could be painful. Another issue to consider is that even with the economy doing well, the firm’s revenue has fallen in recent years. This decrease is not a good sign in and of itself, and further disclosure/context by management should be warranted.

Even so, the mix of good with the not-so-good here is enough to place Thuzio as an interesting prospect at this time. If they can overcome their revenue woes while continuing to expand their memberships and events, Thuzio could very well find themselves at the forefront of a new sports market sector.

Thank you for your vote on Thuzio on Republic

Thank you for your vote on Thuzio on Republic