A Toast to the Alcohol Startups of 2022 - KingsCrowd Skip to content
Become an owner of KingsCrowd.
Invest Today!

A Toast to the Alcohol Startups of 2022

New Year’s Eve is three days away! All across the world, people will be ringing in 2023 with friends, family, and, of course, refreshing beverages.

Drinks are a major part of startup investing, too. Every year, we see a variety of beverage companies raise money in the online private markets. Some immediately resonate with investors… others, not so much.

To celebrate the new year, today’s Chart of the Week shows the amount of funding that alcohol and mocktail startups received in 2022. 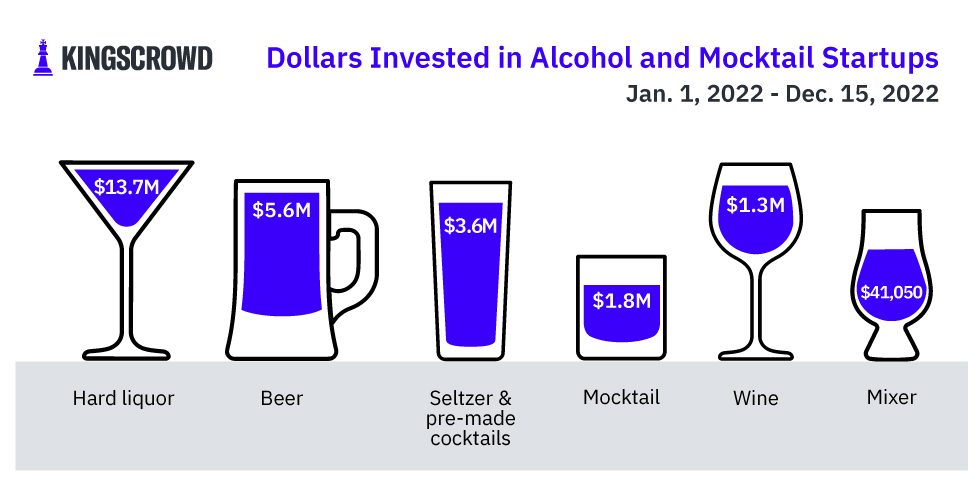 In 2022, 68 alcohol and mocktail companies raised a total of nearly $26 million. Hard liquor dominated the crowdfunding market. In fact, it received more funding than all other categories combined. It also stands out by sheer quantity of startups. Out of the 68 alcohol and mocktail startups that raised in the online private markets, 28 were hard liquor companies (41%).

Investors clearly favor hard liquor startups among alcohol and mocktail startups. Additionally, many entrepreneurs in the online private markets are choosing to start hard liquor companies instead of venturing into the other categories.

There could be several reasons for this. Perhaps both investors and entrepreneurs think that legacy alcohol companies dominate the beer, wine, and cocktail markets, whereas craft and artisan liquors can better compete against the big players. Or it could be because of how versatile hard liquors are. Unlike traditionally standalone drinks, you can be especially creative with hard liquor. (Ever heard of boozy brownies?) So maybe investors and entrepreneurs factor that potential into their decisions.

These are the highest-funded companies in each category (excluding Regulation D companies):

AsomBroso Tequila — the hard-hitting hard liquor contender — took the cake with its $2.5 million-plus raise. AsomBroso previously raised a successful Regulation Crowdfunding campaign, so investors were clearly eager to continue investing in the company.

Investors love alcohol and mocktail startups because they can actually purchase and enjoy the product, unlike many other startup investing opportunities. If you’re looking to join in on the fun, hard liquor companies tend to have more popular and successful startup raises, so keep an eye out.

Top Industries in KingsCrowd Portfolios – Chart of the Week

This Chart of the Week examines the which industries are… ...