In this Chart of the Week, we compare the 10 highest offline valuations and the 10 highest online valuations of 2021, ranking each from highest to lowest. It is important to note that valuations for the offline market are post-money, while the online market displays pre-money valuations. This difference comes about because details of offline raises are communicated after the round closes — making it post-money. With online equity crowdfunding, a startup’s valuation is set at the beginning of a funding round — thus being pre-money. 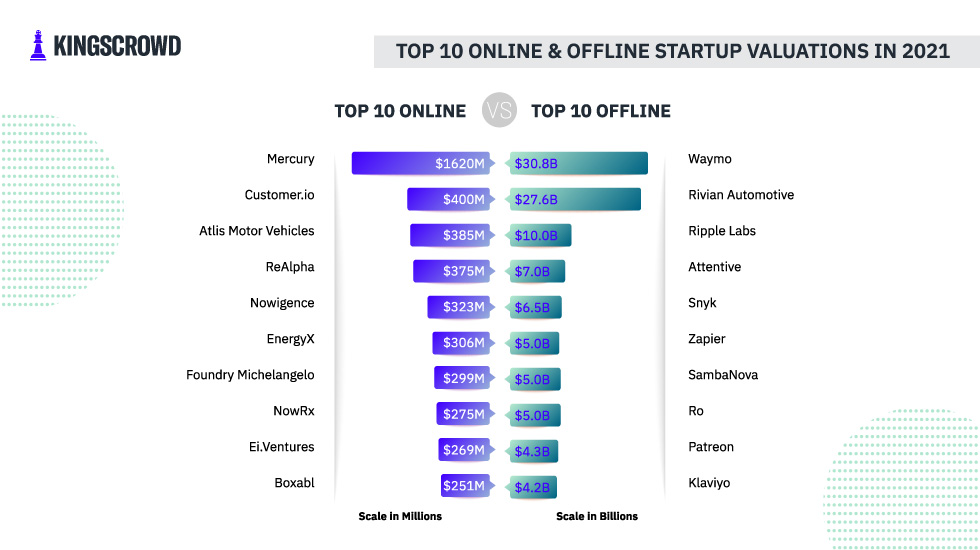 All 10 of the highest valued companies on the offline market are unicorns (all have valuations of $1 billion or greater). The most expensive startup in the offline market was Waymo with a $30.8 billion valuation. Klaviyo came in at the bottom of the offline market with a valuation of $4.2 billion. In the online market, only the highest valued startup — Mercury — is a unicorn. Mercury is by far the most expensive startup that KingsCrowd has seen in the equity crowdfunding space thus far. Its valuation was $1.6 billion. That still makes it far cheaper than the cheapest of the top 10 offline startup deals. After Mercury, valuations in the online market fall off steeply. The next highest valuation is $400 million for Customer.io. Boxabl comes in at the bottom of the top 10 valuations in the private market at $251 million. For reference, the cheapest offline startup — Klaviyo — is worth 2.5-times more than the most highly valued online startup.

It’s clear that offline companies have far higher valuations than online companies. This difference is mostly explained by the different nature of these markets. Raising from the crowd in 2021 means raising small amounts from a large number of investors. In comparison, raising from VC firms means raising large amounts from a small number of investors. Additionally, there are still strict limits placed on how much capital a company can raise in the online markets. Startups raising from VCs face no such limitations, so higher valued companies tend to raise from VCs. However, as KingsCrowd demonstrated, the number of investors in equity crowdfunding raises is constantly growing, and amounts raised are also growing steadily. We’re also beginning to see some companies raise funds both offline and online. This is the case for Mercury, the highest valued online startup deal in 2021. In summer 2021, Mercury raised $160 million through a VC round. It then turned to the online private market and raised an additional $5 million in October 2021. While the gap between offline and online company valuations was extensive this year, we’re looking forward to seeing the next unicorns begin to emerge in the equity crowdfunding market.

Checking Back In With The Legion

In the online private markets, investors can invest in any… ...

The Sports Stack: A Collision of Sports and Alternative Investments

Michael Sidgmore provides an in-depth examination of how sports and… ...