We have officially entered the last quarter of 2022 — or as I like to think of it, holiday season. But this is also a good time to look back at the year so far and see how things are shaping up. That’s why this Chart of the Week identifies which platforms have had the highest deal flow and the most dollars invested through the third quarter of 2022. (Note: both of these graphs focus on equity deals only, and dollars invested is based on deals that closed between January 1 and September 30, some of which could have opened prior to 2022.) Paying attention to platform performance — particularly in terms of deal flow and capital raised — can help you know where to find the best investment opportunities.

Historically, we have seen the same few names in the top five platforms when it comes to deal flow and dollars invested — usually Wefunder, Republic, StartEngine, Netcapital, and SeedInvest. But this year things have been shaken up. 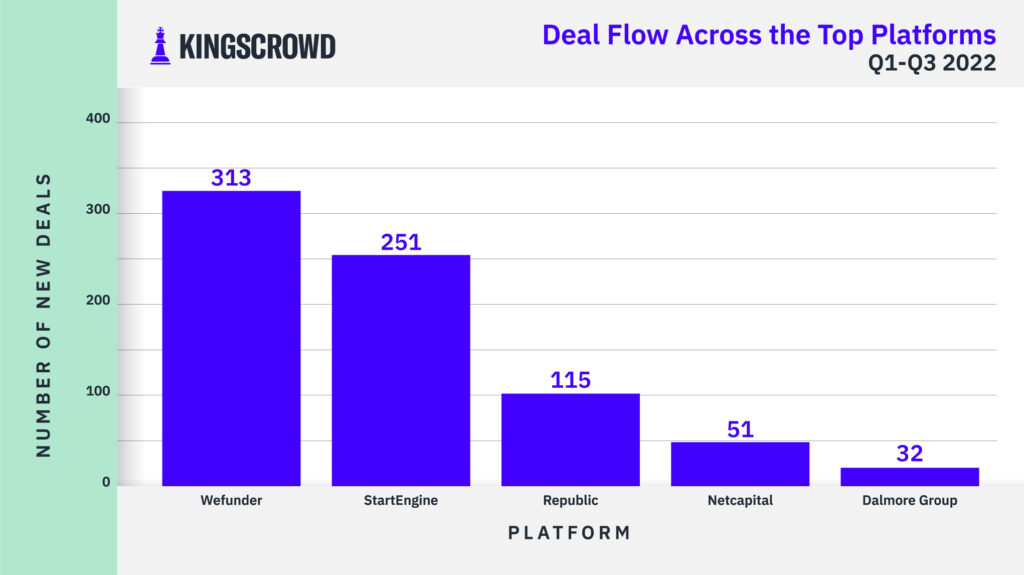 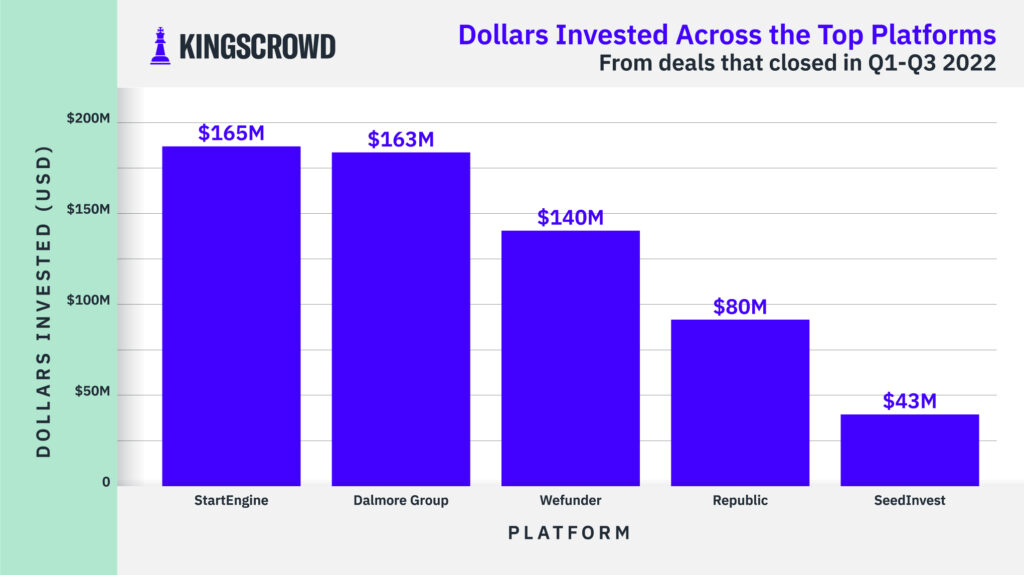 So far in 2022, Wefunder, StartEngine, and Republic offered investors the highest deal flow by far. Netcapital and Dalmore Group rounded out the top five, though the two platforms have less than 100 new deals combined. Dalmore Group is a more recent addition to KingsCrowd’s coverage since the majority of this platform’s deals are Regulation A (Reg A) raises.

Interestingly, when it came to dollars invested in closed deals, StartEngine and Dalmore Group both surpassed Wefunder. Both platform’s dominance in this metric can likely be attributed to the presence of successful Reg A raises that they have hosted. A startup can raise up to $75 million through Reg A raises annually, and we regularly track Reg A deals with max investment goals of $10 million of $20 million. Those investment totals can rapidly add up, as we see.

Also of note, Netcapital came in ninth for dollars raised despite being in the top five for new deals. It seems that Netcapital is bringing deals to the table that are disproportionately underfunded compared to the other top platforms.

At a basic level, platforms with high deal flow will likely offer a wide range of quality and types of companies. But deal flow isn’t enough on its own. As our data shows, more deals doesn’t automatically equal more dollars raised. And knowing which platforms are seeing strong capital flow can help you prioritize where you source deals. The more money a startup raises, the more runway that company has to lean on. And with runway comes more freedom to allocate funds to product development, marketing, or scaling a team. The online private market can also be a temperature check for product-market fit or social proof-of-concept since many early investors also become early adopters.

There are dozens of platforms where investors can find startups open for investment. And as of this writing, KingsCrowd is tracking nearly 600 active deals. Knowing which platforms are market leaders is key to keeping up with the pulse of the online private market.

Note: All data on online startup investing used for the Chart of the Week comes from the KingsCrowd database and represents a snapshot of the US crowdfunding market.
Platform is defined here as the SEC-registered intermediary (broker-dealer or funding portal), or if none, the primary non-broker or non-funding portal platform conducting the offering.

The Mad Dash to Reinvent the Very Food We Eat: Crowdfunding Style

Are startup valuations rising? This Chart of the Week examines… ...