The Value of a Defensible Hardware Product

Welcome back to the KingsCrowd series on defensibility by product type. A few weeks ago we dove into what defensibility means for private investors. We also looked at how much investors valued defensibility in software companies. As a refresher, defensibility can come in a variety of forms. Patents, for example, protect certain intellectual or physical property rights. Other forms of defensibility include existing in a market with high barriers to entry — perhaps accompanied by legal or regulatory hurdles — or requiring massive amounts of data.

This week we isolated Hardware/CPG (consumer product goods) companies, accounting for 96 total raises. As with the overall Merlin company scores, KingsCrowd’s defensibility subscores range from 1.0 to 5.0 in increments of 0.1. As a proxy for success rate, we looked at the amount of funding companies in each category acquired at the close of the raise. This data is reflective of all confirmed closed Regulation Crowdfunding (Reg CF) equity raises tracked by KingsCrowd. 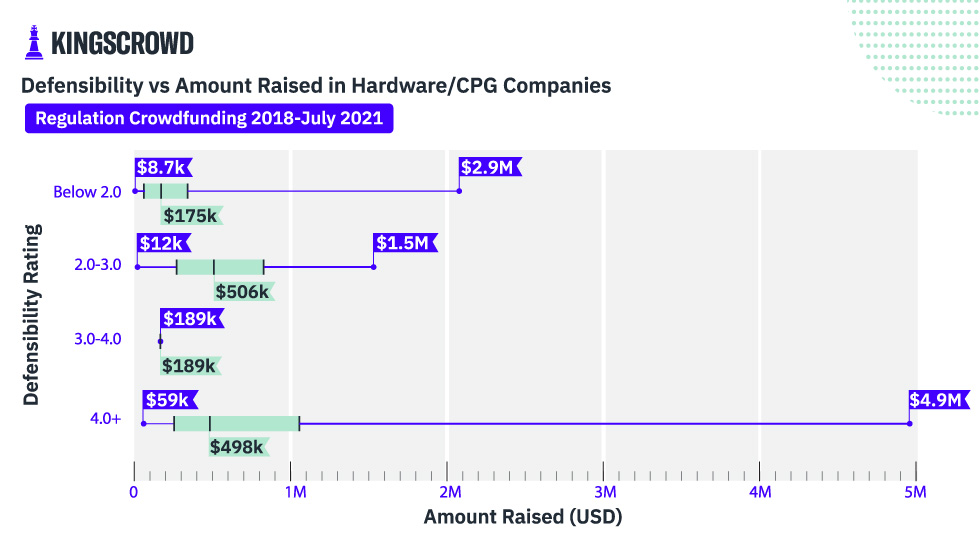 The 2.0 to 3.0 defensibility rating group had a wide spread when it came to amount raised, ranging from $12,000 to $1.5 million. This category accounted for 23 raises total. More than 55 total companies fell into the defensibility subcategory below 2.0. Despite being the category with the most companies in total, funding for hardware/CPG companies with defensibility scores below 2.0 had a lean spread. This is in direct contrast to software companies that rated below a 2.0, which had the largest spread of all the software groupings.

Overall, this may indicate that defensibility matters more to private investors when the company in question is providing a hardware or CPG product. Perhaps investors weigh metrics like market size more heavily when it comes to software but want to see physical assets protected by defensibility stamps like patents. Stay tuned for the coming weeks when we dive into the final two product types: pharmaceuticals and services.

The newest startup equity crowdfunding campaigns from across more than… ...

What Is Pre-Seed Funding?

Pre-seed round of funding, or pre-seed money, is the capital… ...

The Pros and Cons of Preferred Equity Investments

Welcome back to the KingsCrowd series on defensibility… ...