In our last Chart of the Week, we discovered that the home state of startups raising capital via Regulation Crowdfunding in 2021 did not correlate much with the population. Other factors such as laws and taxes attract founders. While the number of online startup deals tells us about the investment opportunities in a state, the amount of capital invested in startups tells us about their quality and appeal to investors.

In this Chart of the Week, we are looking at the amount of capital invested in each state via Regulation Crowdfunding in 2021.

But is there any correlation between a state’s population, the number of startups that come from it, and the amount of capital these startups raise? 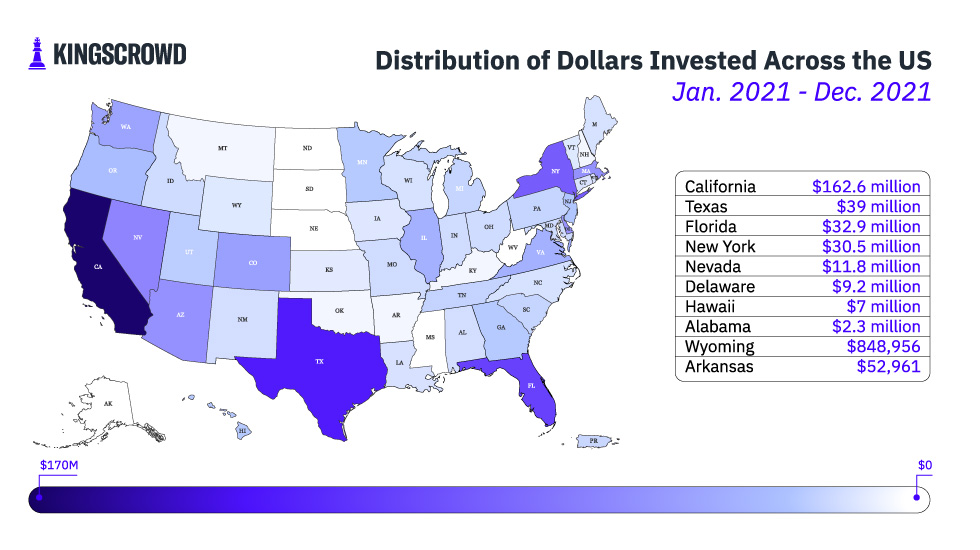 In 2021, investors put more than $450 million in online startup deals. California, Texas and Florida startups received 51% of online capital last year. While we learned last week that New York had the second-highest number of startup deals, it had the fourth-largest amount of capital invested into startups. Similarly to New York, Wyoming had more startups raising capital online than 50% of other states, but the total amount of capital invested in Wyoming startups was less than the amount invested in 75% of other states. At the bottom of the list, Arkansas’ two startup deals received less than $53,000.

This map also shows us that there does not seem to be a strong relationship between the population and the amount of capital invested in each state. The three states with the highest capital-to-population ratios in 2021 were Delaware, Hawaii and Nevada, followed by California. While we previously explained that startup founders are attracted to the favorable corporation laws in Delaware, the low taxes in Nevada, and the robust investor network in California, Hawaii wasn’t high in our raise-to-population ranking. But with $7 million invested across five deals, Hawaii appears to be the state with the highest amount of capital invested per deal, right ahead of Puerto Rico ($3.95 million for four deals) and Indiana ($3.78 million for four deals).

Each of these five deals gathered more than $190,000 in capital, including $3 million for The Bucket List Studios and $3.5 million for the Deal To Watch Terraformation. Miso, another Deal To Watch, is still active and is not far from raising $300,000, while Hele Fitness, a Neutral Deal, has raised close to $300,000. Each of these companies is operating in a different industry, and none of them are related to tourism.

Surprisingly, WalletHub named Hawaii the worst state to start a business in 2018. The high cost of labor, office spaces, and the low availability of human capital and investments are barriers to growing a successful business in the Aloha State. So why did Hawaii raise so much capital with only five deals last year?

Overall, it seems investors are less concerned with where startups come from and more concerned with the quality of the investment opportunity. Hawaii, ranked as the favorite state in a poll of 1,200 Americans, has everything to attract creative founders despite its high cost of living. The government of Hawaii is also making efforts to attract and retain startup founders and make Hawaii a “Startup Paradise.” This could help Hawaii one day rival Silicon Valley and other startup hubs.

With only five raises, there isn’t enough data to prove this out. But with the increase in remote work within technology companies, launching a startup in Hawaii has never been easier. Oracle co-founder Larry Ellison recently moved to the Aloha State. So trends may well eventually launch Hawaii to the top of founders’ lists.

Lessons From a New Startup Investor

Some lessons from this brand-new startup investor include: do your… ...

KingsCrowd compared the growth of investments in venture capital and… ...