Join us in revolutionizing card & board game streaming.

CardBoard.Live’s solutions include in-stream interactive features, image recognition, and the ability to purchase items you see on the screen while viewing. This improves functionality for streamers, and enhances the viewing experience for viewers, while rewarding retailers and content producers.
Create a free account today to gain access to KingsCrowd analytics.

CardBoard Live has been selected as a “Top Deal” by KingsCrowd. This distinction is reserved for deals selected into the top 10% of our deal diligence funnel. If you have questions regarding our deal diligence and selection methodology please reach out to hello@kingscrowd.com.

Check out our discussion with Co-Founder Wilson Hunter HERE, which was conducted as part of our due diligence process.

For years, many in the US have been calling for soccer to grow as a sport. And that it has, but who would have expected that out of nowhere video games or ‘e-sports’ would make a move to become the next dominant ‘sport’ in the United States.

In fact if you turn on ESPN during the X-Games you just might see video gamers playing alongside the most extreme sports athletes in the world as this sports entertainment giant aims to grab its piece of the growing ‘e-sports’ streaming pie!

With the underlying global gaming industry enjoying a period of accelerated growth (a CAGR of 10.3% from 2017 to 2021), thanks in part to outsized growth in mobile gaming, spend in the gaming sector actually surpassed that of the film and music industries combined in the US with over $23B spent in 2016 alone. 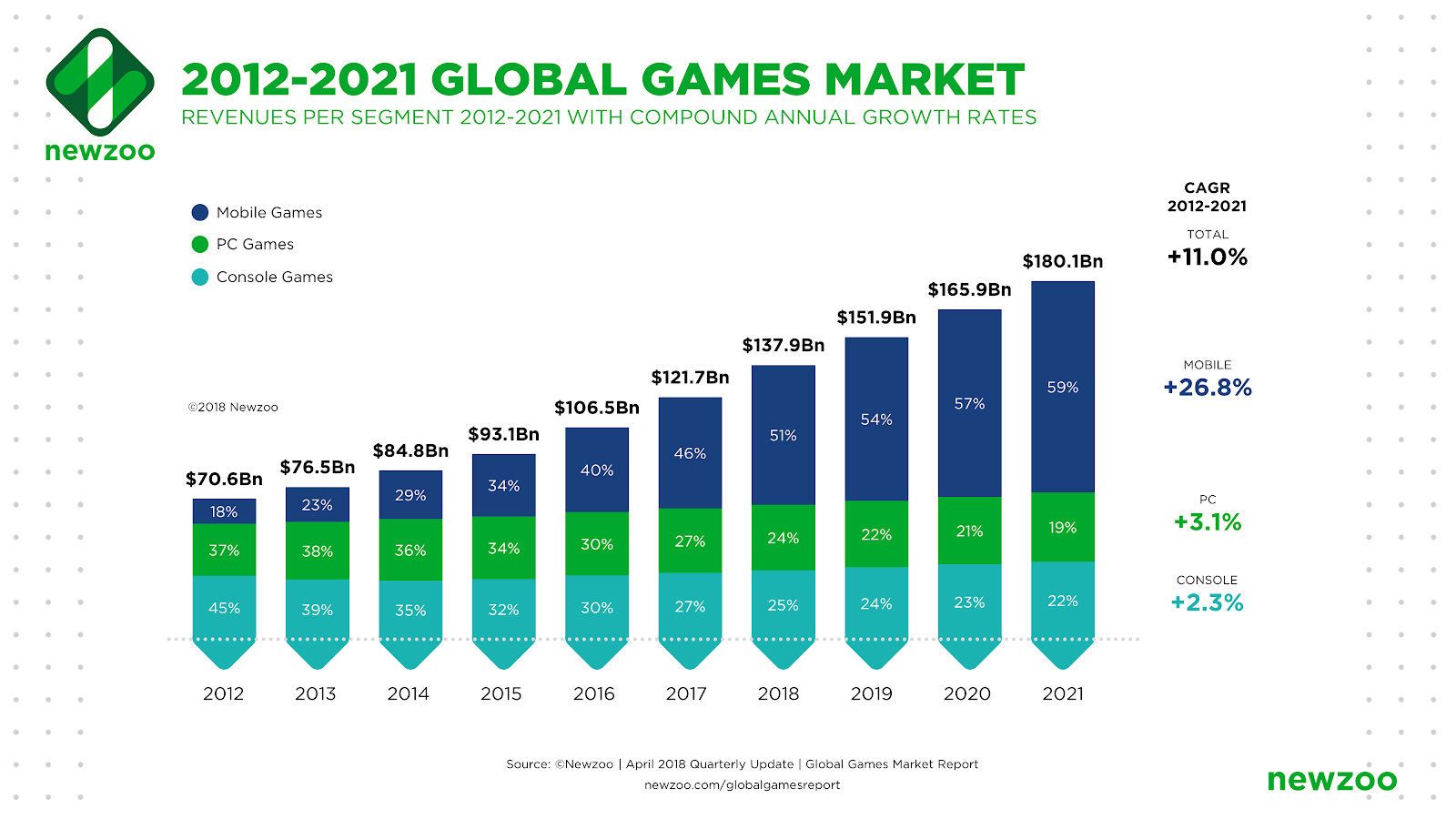 A big driver of underlying US gaming spend growth is attributed to the e-sports and video game streaming phenomena. In 2017, 666 million people watched gaming videos, a population expected to rise to 740 million by 2019.

Look I’m with a lot of people in not really understanding the fascination with watching other people playing video games, but walk into any high school or college dorm room, and you are bound to find at least one person streaming other video gamers on Twitch or Youtube.

Infact Twitch raised over $35M from VCs to build a Youtube specifically for gamers before being acquired by Amazon for $970M in cash. Yes, you read that right a video streaming service to watch other video gamers was acquired for nearly ONE BILLION dollars. Perhaps, its because the platform has over 100M users and over 7.5B minutes of videos watched.

The absolute astounding nature of the video game watching phenomena is a fascinating case study in human psychology. The only thing you need to know is that there are a lot of similarities between video gamers and card gamers like those who play the card game Magic. Infact if you look up ‘Magic: The Gathering’ on Youtube a great deal of the videos on page one about the game have between 100K and 1M views.

Suffice to say that there is perhaps a pent up demand for a similar Twitch-esque solution for the card and board game space. And the CardBoard Live team believes they have a solution…

CardBoard Live is Twitch for card games. Utilizing artificial intelligence (AI) and live experiences to enhance interactions between streamers and viewers that are working to create an optimal viewer experience (e.g., focus on cards in play, live video feed to elaborate on a gamers thought processes), and social experience (e.g., chat features), this company is making offline game streaming a similar experience to online gaming.

By making the offline world of card games interactive and online, gamers can find more of what they like and it might even be a growth driver for card games like Magic. Not sure if card and board game streaming has the same market demand as video games?

Check out some of the early stats:

I am the first to say that in the startup world the “If you build it they will come,” mantra is far from a guarantee. But in this market, with this solution, it’s truly a no-brainer. It’s one of those businesses where you ask yourself, why didn’t I think of that?

And thus this team has quickly been able to garner tons of demand and support for what they are building. Better yet, the monetization model is seamless. CardBoard Live allows viewers to purchase games or cards featured in the stream, which is one of the best captured audiences you can find for card and board games.

This feature pays streamers a commission for each sale, incentivizing streamers to focus on video quality and content, a win-win situation for both parties. There will also be subscriptions for paid content. Simplistic and easy for gamers to understand who are used to similar models used on other platforms.

1. Market Potential: In recent years the game streaming industry has swelled to $35 billion, and more people watch games than the combined audience of HBO, ESPN, Netflix and Hulu. Even CardBoard Live’s underlying market (offline board/card games) is expected to grow from $10B to $12B by 2023 at a 9%+ CAGR.

Being able to provide a unique streaming solution for this growing offline gaming market is a terrific market position for CardBoard Live especially as a first market entrant. We think the team has an excellent opportunity to capture an outsized portion of this space.
2. Strong Business Model: CardBoard Live has shown an ability to capture an audience’s attention with a very focused interest. The ability to sell gaming ads and products in-stream is a brilliantly seamless way to generate revenues for CardBoard Live. Some would even say this could be a highly attractive offering for a company like Amazon that is always looking for ways to drive its e-commerce growth.

3. Proven Product Market Fit: During beta tests, CardBoard Live successfully captured a large audience, with more than 10 thousand signed up before initial tests. Every day, over 50 thousand people tuned in to watch 75 regular streamers, and every month more than 18 thousand minutes were watched. Getting users to engage with a product so new like this so intently is a testament to having solid product market fit.

This is a quintessential no brainer business with the right product at the right time. Since the company raised $735K, with a valuation cap of $3.5M this past summer the team has proven that their visionary idea actually works, which justifies the current $9M valuation cap.
4. Ripe For Acquisition: There are no guarantees in the startup world, but an acquisition of this business is about as sure a thing as I’m willing to predict. With a strong product, a clear fit in-market and a nearly billion dollar acquisition in the video game streaming space, expect a big gaming company (trying to grow its product line), board game (trying to reinvent) or a player like Amazon (trying to expand e-commerce sales) to bring a company like this in-house at a hefty premium to the current valuation.

James Hsu, Co-Founder, has over a decade of experience working in senior positions in the tech industry at companies like Microsoft, Amazon, and Yahoo, exposing him to healthy corporate practices and high-level strategic decision-making.

Even more, Hsu has over 15 years in competitive card gaming, publishing a book and hosting a podcast on Magic: The Gathering. His experience on both sides of a gaming stream gives him unique insight into what viewers want to see and learn and helps him understand what struggles streamers may have in presenting gameplay.

The other co-founder, Wilson Hunter, is a seasoned gamer with competitive gaming experience, and also contributes valuable experiences to the company. Having ranked as a top 20 Magic Legacy player, Hunter is well acknowledged as a seasoned professional and also hosts a Magic-themed podcast called The Brainstorm Show.

At the age of 21, he was named Rookie of the year and has been invited to speak at numerous national conferences. The high level of publicity he enjoys from his extensive experience in competitive card games also provides CardBoard Live a platform to spread brand awareness.

Both co-founders are evidently capable, knowledgeable, and passionate about the gaming industry from their backgrounds, and each contributes a variety of experiences that provides a strong foun dation for CardBoard Live.

CardBoard Live is a scalable, no-brainer business that is meeting an evident market need, with a brilliantly simple solution that is already delighting early adopters and is poised to grow quickly as the company ramps up spend on customer acquisition.

We wish we thought of this business, but are happy to say we think this is a Top Deal with a lot going for it. Of course everything comes down to execution, but this team has already shown an ability to get the business off the ground and in our discussion with them, we became bought in on their ability to execute.

At the current valuation, we think this is a terrific entry point for investors.

Thank you for your vote on CardBoard Live on Republic

Thank you for your vote on CardBoard Live on Republic