The Drive To Lower Minimums In RegCF - KingsCrowd Skip to content
Become an owner of KingsCrowd.
Invest Today!

The Drive To Lower Minimums In RegCF

A couple months back, writing at the time for Crowditz (a subsidiary of KingsCrowd), I took a look at the trend in the minimum amounts that companies were targeting in their offerings (Are the size of Reg CF offerings changings?).

The TL:DR version of that write-up was: offering targets were, on average, decreasing, and the number of companies seeking “large” amounts (over $500K) declining and the number of $10K offerings increasing. Since last week we took a look at how long it was taking firms to reach their minimum target, I thought it would be worthwhile revisiting this analysis to see what has been going on with this trend over the last 7 months. 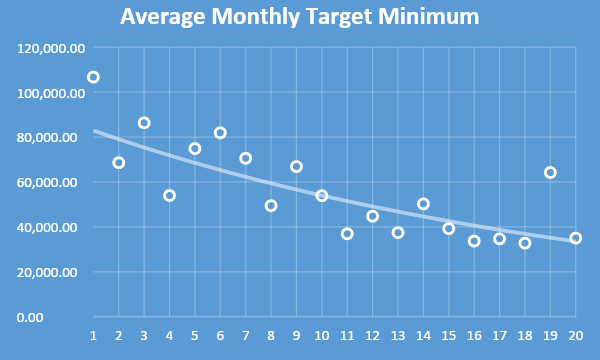 When we last took a look at this chart, we had only 14 months of data, which took us through October of 2018. Back in October, you could see the downward trajectory that target minimums was on. Picking the data back up in November of 2018, through the first week of May 2019, we can see that for the most part, this trend has continued, with average round minimums clustering below $40,000.

You might be looking at this graph and saying “but what about April!?!?” Well, April saw one of the rare offerings these days that sets a minimum of $1,000,000. And that’s a better segue than any for a brief Q&A on offering minimums:

Q: What would the average target have been without that offering?

A: Excluding that offering, the average target would have only been $37K

A: It hasn’t happened in our sample since March of 2018, which was a side-by-side offering on SeedInvest. Those are the only two $1M targets in our sample. In the first year and a half of Reg CF, there were also only two $1M+ offerings (not included in our dataset).

Q: How do these offerings typically fare?

A: The side-by-side offering over a year ago, SynTouch…that one reached its goal. The most recent offering, MoneyVoice, got up to total commitments of $76K, well below its target, but more than twice of what the adjusted average target for April 2019 would have been.

Q: Last week you wrote about the time it takes for an offering to reach its minimum goal. Does the size of the minimum impact this?

A: It appears that at least recently, the lower minimums are leading to firms clearing the minimum hurdle in a fewer number of days. In 2019, the average minimum days to clear the hurdle are all under the average of 29 days mentioned last time. On the whole, 2019 offerings that hit their minimum target are doing so in an average of just 2 weeks!

Q: So why do firms still set high targets if it appears the trend is to set lower targets?

A: I think some of the reasons I mentioned in the previous article looking at minimum trends still hold true. Some firms might be using Reg CF offerings more for publicity or proof of concept reasons. Others might genuinely need those larger amounts they are asking for to achieve their goals. A third reason could also just be a misread of the market and the company’s own valuation.

So where do we go from here? My best guess is that this trend continues, and we see the average minimum offering get closer to $10,000. While a common argument made about Reg CF and its Maximum offering size cap of $1,070,000 is that this appears to be an arbitrary number that keeps firms from raising the total amount of capital they need, on the other side of the sliding scale, firms appear to be taking advantage of low targets to get what they can.

It will be interesting to keep an eye on this trend if the investment cap ever does increase, but for the time being, it may be in the best interest of firms to behave like a pole vaulter. No one sets the bar at its highest level on their first jump. Give yourself a low bar, jump over it, and see how high you can go from there.

We break down the latest deals available for investment as… ...