The first time I learned that mammograms were incredibly painful was the first time Cecily got one after we got married. I guess this is something mothers don’t tell their sons but expound at length to their daughters about. I was clueless (not the first time, Cecily insists, and not the last).

So when she described the process to me, I was genuinely horrified. Man, it sounded bad. Even back then, as a callow young man, I thought to myself, “Is this the best we can do?”

Evidently, it was. Because every year since that first one, when the day of her mammogram exam arrived, she would note the occasion to me. “Here we go again. I hate it.”

But she kept going back… and with good reason. In the US, breast cancer is the most diagnosed cancer in women. And catching it late is akin to a death sentence. Once it reaches stage 4, the survival rate is an astonishingly low 22%. Mammograms are still the best method we have for early detection.

I suspect most women know this and most men don’t. Well, at least I didn’t. (Cecily is right — still clueless.) And yet, more than half of women who are 40 years and older don’t get mammograms. That’s simply unacceptable. 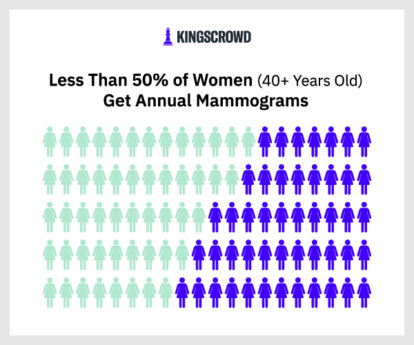 Once again, 40 years later, I find myself asking the same question. Is this the best we can do?

The answer — thanks to a tiny company called Koning — is a resounding “no.”

Koning provides an extremely quick and painless imaging experience. It takes a mere seven seconds. You’re lying down. And you’re unencumbered. The difference is night and day from your typical mammogram endurance test.

That’s just half of the solution Koning offers. The other half is just as important. Its 3D imaging technology is appreciably more accurate than mammograms. Mammograms detect on average three to four breast cancers per 1,000 exams while preliminary research suggests  that Koning’s technology may be able to detect up to 20 to 24 per 1,000. Koning’s technology should lead to much better health outcomes.

Among other things, this means that Koning’s machines can reliably detect stage 0 and stage 1 cancers. Just how significant is this? Detecting breast cancer at stages 0 or 1 gives patients a 99% five-year survival rate. Its imaging technology can also detect small calcifications and small tumors in patients with small or dense breasts — something current mammograms struggle with. Calcifications, by the way, are often an early indicator of breast disease.

This changes the game. Mammography has ruled the industry for 60 years. While flawed, it was — for its time — the best technology available. That’s no longer the case.

Koning’s technology is far superior. And for all the reasons I’ve just enumerated, it should be considered paradigm shifting. Bettering the patient experience and providing much better health outcomes — including saving lives — is one heck of a combination.

But even transformative technology that solves a big health problem doesn’t necessarily sell itself — especially when it comes to healthcare in the U.S. Koning has set its sights on cornering the breast care market. That’s ambitious.

For investors, it’s worth noting that this ambition elevates the upside. But it also comes with risks. What’s Koning’s plan? Once again — as it did with its technology — Koning is thinking outside the box.

Pay Annually and save 17%

Charts and trends of capital raised by platform, security type, industry, and more.