Innovega is raising funds on SeedInvest through Reg D 506(c) raise. The company makes and sells smart contact lenses and glasses that deliver high-quality AR/VR experiences. The experience is provided through eMascula, the wearable display system of Innovega. Innovega has 14 issued US patents and 13 pending patents. The product of Innovega has completed pre-clinical testing, and clinical trials are underway. Stephen Willey and Jerome Legerton founded Innovega in 2008. The current crowdfunding campaign has a maximum target of $5 million. The campaign proceeds will be used for growth and expansion.
Create a free account today to gain access to KingsCrowd analytics.

Amount raised on SeedInvest during current round: $627K as of January 30th

Innovega has been selected as a Deal To Watch, which is reserved for the top 10-20% of all deals we analyze in our due diligence funnel.

Augmented reality (AR) has been a hot topic in tech news for the past few years, drawing in interest across a wide range of industries with its b road appeal. From retail to gaming to medicine, everyday consumers and industry leaders are racing to adopt AR technology in their lives and operations. By digitally enhancing live virtual-reality videos with the real world using computer-generated graphics, AR has the power to transform the way people see and interact with the world around them.

AR can address a variety of problems by enhancing vision or offering hands-free access to digital information. However, while AR technology has made great strides over the past few years, the product design surrounding the technology has limited its adoption. You know the big headsets that look like you are going to space, rather than going to the movies.

The idea of AR headsets usually elicits images of bulky, shoe-box like structures designed to be worn around the head, like goggles. Perhaps you even remember the streamlined but still heavily made fund of Google Glass? (Pictured right)

This clumsy form of AR goes against a critical component of the broader value proposition in the wearable tech industry: a seamlessly integrated user experience, one that enhances our everyday lives with no additional frictions.

Innovega’s digital eyewear system, eMacula, makes it easy for AR technology to be fully integrated not only in the work-lives of professionals, but also in the everyday lives of regular consumers. 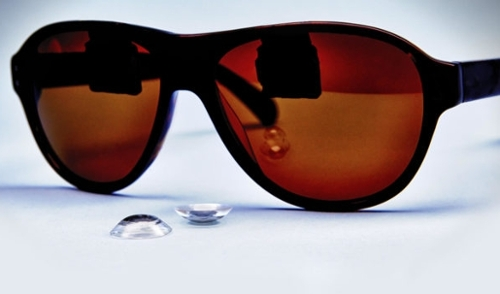 eMacula pairs contact lenses with a glasses frame that has a built-in screen to display media. By combining lenses and glasses to create an AR set, the user is able to view high-definition media on screen without affecting their regular vision or causing strain on the eyes.

This new an d inconspicuous form magnifies the functionality of AR by making it a more wearable technology, allowing it to be easy to use in everyday life.

Imagine having your entire world of communication visualized right in front of you without ever picking up a phone or computer. It would reshape the way we work and communicate all together, which is why it is such a major innovation that some of the largest tech pioneers are keeping a close eye on.

The broader wearable tech industry is experiencing high growth, with a projected 28.3% CAGR setting the industry on track to reach $82.3B by 2023. Industry reports expect AR headsets and smart glasses to be especially on the rise within the growing adoption of wearable computing devices, as AR has already begun to integrate into the operations of various organizations to enhance efficiency and prevent workplace injury. 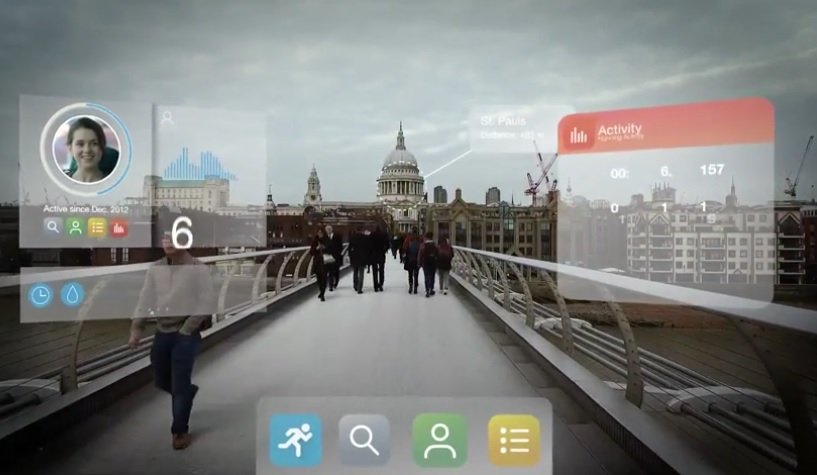 Commercial end users, especially in healthcare and medical, manufacturing, and security and logistics verticals are also expected to invest heavily into wearable AR devices as the technology continues to progress in functionality and accessibility.

A key threat to growth in this market stems from user interface and user experience with wearable tech devices, as manufacturers are constantly struggling to find a balance between size, usability, and complexity.

Innovega’s eMacula directly addresses this threat with its uniquely simple and inconspicuous design that breaks the mould of traditional AR wearable devices, which are often seen as cumbersome and unstylish.

In the AR wearables industry, specifically with respect to the preferred medium of contact lenses, Innovega faces competition from larger technology incumbents, such as Sony, in addition to newer entrants into the space, like Snap and Vuzix.

The market shows a variance in offerings across the dimensions of price and technology. High tech offerings include more advanced functionalities, such as superior processing speed, storage, image resolution and fields of view.

The most affordable competitor in the market, Snap’s Spectacles, offers the most limited functionality, including video and photo capability and connection to the Snapchat app. It’s also been regarded as a relatively large flop, in big part because its use is limited to Snapchat aka not integrated with our everyday lives.

While Innovega has not released any concrete indication of the anticipated market price of eMacula, the company has pegged the product to eventually be competitive with regular designer glasses, placing it towards the lower-end of the price spectrum, as designer glasses cost an average of around $200.

Meanwhile, Innovega’s eMacula has been identified as comparable to products made by Sony and other large incumbents with regards to functionality, placing the company in a unique position in the market as a mainstream AR solution both on price point and visual presentation.

Most importantly, Innovega seems best positioned to integrate their technology into well-established contact lense providers, which will give them the fastest route to market.

As with any major step change technology (e.g., the internet), Innovega received its first major contract from DARPA as well as the National Science Foundation and the National Eye Institute for $4.2M. They have also been granted $1.3M in government contracts and have generated $2M in gross profit while raising capital from major investment arms like Tencent.

With so much work and research completed for the government, this team has been able to build a book of 26 patents, which they can utilize to protect their platform of technology while still licensing it.

Through the licensing model, Innovega can partner with and license the technology to established contact lens providers to generate rapid scale.

The technology, government backing, and distribution model all position Innovega to have more than a fighting chance to become a market leader for wearable AR.

Innovega was co-founded by Steve Willey and Jerome Legerton in 2008 and is now based in the Seattle, Washington area. Willey has served as CEO since 2011, bringing a background in entrepreneurship and laser scanning technology from when he founded MicroVision (NASDAQ: MVIS) to the company. Willey most recently spent two years as a member of the Board of Directors at Axion Ventures (TSX-V: AXV), a company that invests in the technology and gaming sector.

With all of the excitement surrounding AR, it has still struggled to find its footing with consumers. While we think Innovega has the right channel partners and technology there is still the added risk of the market continuing to lag behind expectations. The too early to market indicator is something to just keep an eye one and consider before investing.

At the $32M valuation cap, we also need to take into account that a 10X return or more, would require a $300M+ exit. Now Oculus sold to Facebook for $1B. Could Innovega be the next major acquisition on Mark Zuckerberg’s radar? It could very well align with his strategy of bringing AR to its billions of users. Between the complexity of the technology developed and potential acquisition upside, this seems to be a palatable (though mildly elevated) valuation.

Regardless, the promising technology and market position of Innovega’s flagship product, eMacula, position the company to make waves in the AR segment of the wearable tech market and they have the potential to be one of the most important companies to reimagine what vision means all together.

With a growing number of patents and a uniquely broad appeal in the end-user market stemming from its wide range of functionalities, Innovega could be an attractive company for tech investors to include in their portfolios.