Brand new Regulation Crowdfunding limits went live on March 15th — and we wanted to show the already measurable impact this change has had. In this Chart of the Week, we examine the total capital raised for the month of March over the past four years. As a reminder, the increase in Regulation Crowdfunding raise limits from $1.07 million to $5 million occurred on March 15, 2021 — halfway through the month — so we can reasonably expect that this massive growth is only a fraction of what it will look like in the coming months.

Now to dig into the numbers. 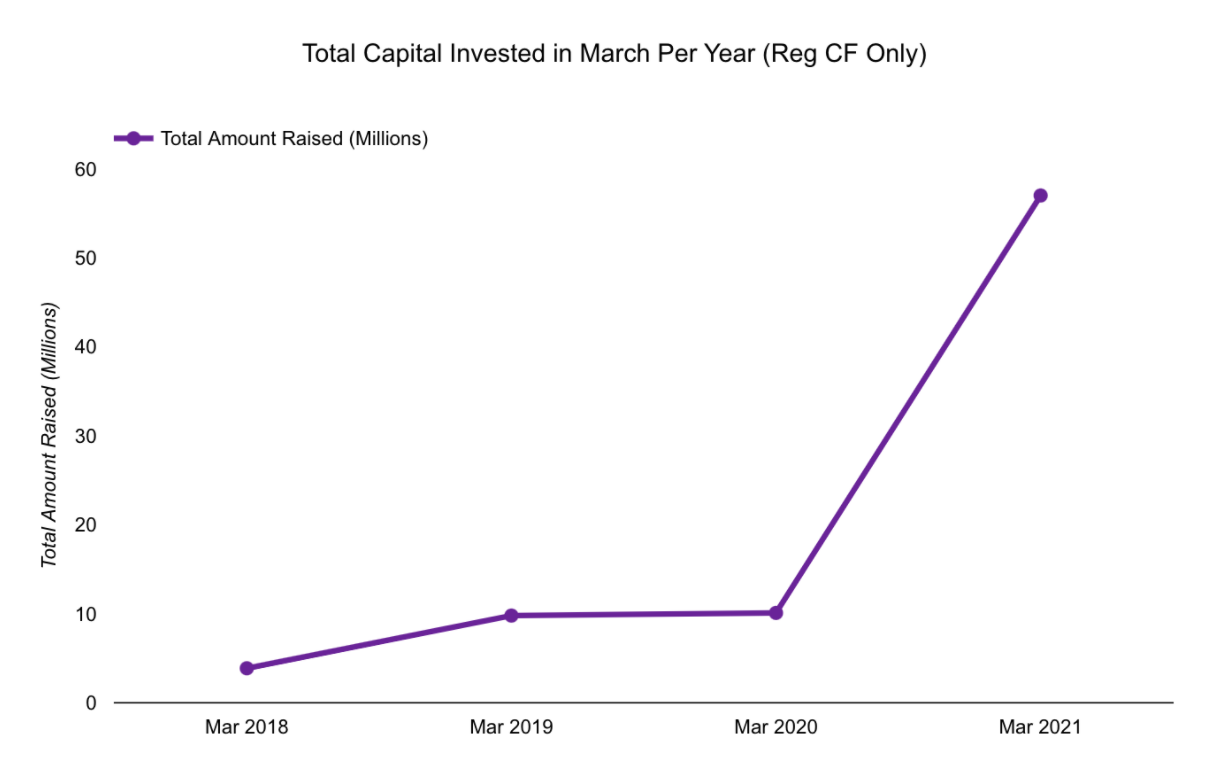 In March 2018, $3.8 million was raised via the online private markets. This number increased to $9.8 million in 2019 — an impressive 157.8% jump. In March of last year, $10.1 million was invested into Regulation Crowdfunding deals. The change from 2019 to 2020 was a smaller jump from the year before. This year, however, we saw $57 million go into Regulation Crowdfunding campaigns! That’s a 474% increase over the 2019 figure — and a glimpse into what these regulation changes could mean for the ecosystem as a whole.

Companies like Backstage Capital and Gumroad undoubtedly contributed to this growth in 2021. Both startup’s March raises quickly sold out at the $5 million maximum.

As a reminder, several new platforms were added to the KingsCrowd platform from 2018 to 2021 in an effort to expand coverage. These additions will contribute to some of the perceived growth, particularly from 2018 to 2019. Regardless, this is reflective of ecosystem expansion as a whole, as more platforms have been created to accommodate growing demand. Between new regulation changes and general growing popularity, we are excited to see how amounts raised via Reg CF continue to grow.

Chris Lustrino and Sean O'Reilly discuss the origins of crowdfunding… ...

How to Read a Form C

KingsCrowd has aggregated the latest equity crowdfunding deals from across… ...