Chart of the Week - Funding Status By 2020 Staff Picks - KingsCrowd Skip to content
Become an owner of KingsCrowd.
Invest Today!

Chart of the Week – Funding Status By 2020 Staff Picks

On February 1st, 2021, Mevo announced plans to join Logitech. Mevo’s Regulation CF raise was rated a Top Deal by the KingsCrowd investment team back in March 2020. This week, we wanted to continue to put our staff picks to the test. For our chart of the week we broke down the funding status of 2020 equity companies by KingsCrowd staff pick. As a reminder, the staff picks tiers of the companies covered by our writers are (in order): Top Deal, Deal to Watch, Neutral Deal, and Underweight Deal. 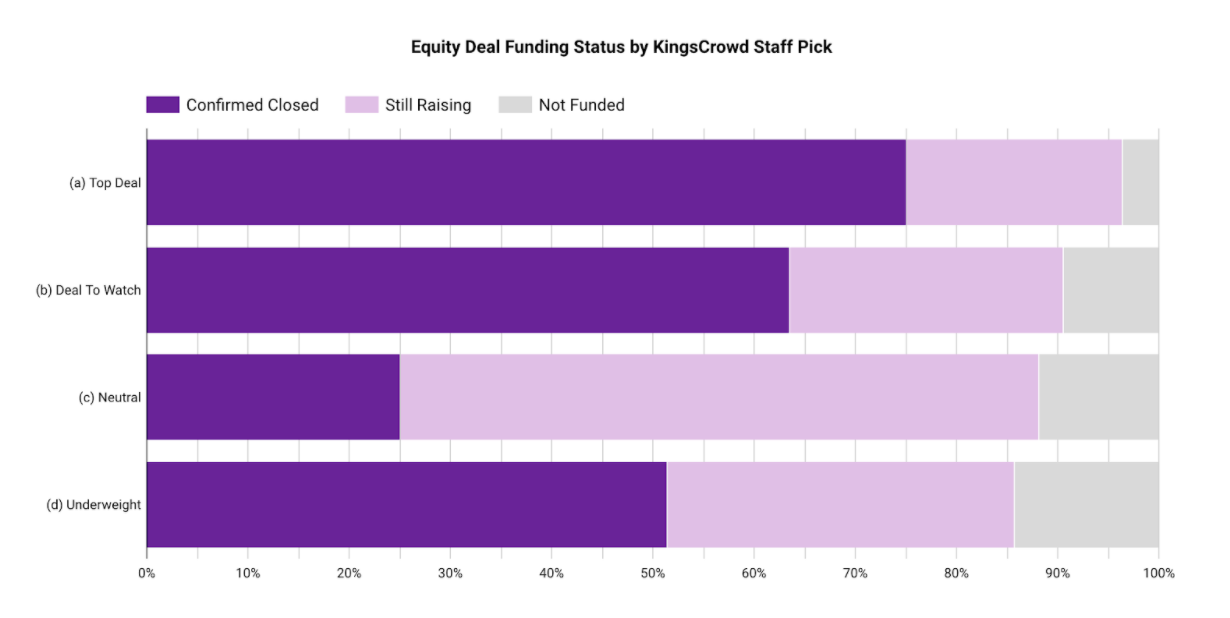 Companies with the confirmed closed status (dark purple) have successfully closed raises. For 2020, Top Deals had the highest percentage of companies with successful raises, at 75% of total deal flow. Around 20% of KingsCrowd rated Top Deals remain open for funding (light purple), leaving just over 3% not funded (grey). Similarly, almost 65% of Deals to Watch from 2020 were successfully funded. However, a larger percentage — close to 10% — of Deals to Watch did not close with funding (leaving around 25% with still open raises).

This is heavily contrasted by Neutral and Underweight Deals of which just 25% and 51% have successfully closed, respectively. Note that Neutral Deals were the most recently added of the staff picks — coverage began in August 2020 — which may help to explain the large amount of still actively raising Neutral Deal companies.

KingsCrowd CEO On Investing In What You Know

As the Founder and CEO of KingsCrowd, I am often… ...

The SEC raised the limit on Regulation Crowdfunding from $1.07… ...