There is a perception that the most successful startups in recent years have been founded by young entrepreneurs in their early to mid-20s — people like Mark Zuckerberg, Evan Spiegel, and Kevin Systrom. The media has played a huge role in creating this narrative. However, the data seems to show that these founders are the exception rather than the rule. The most successful entrepreneurial founders are in their mid-30s to early 40s. But what about in online startup investing?

In this Chart of the Week, we examine the relationship between the age of founders and the amount of funding they raise from investors online. Our data set covers Regulation Crowdfunding (Reg CF) rounds from January 2020 through September 2021 and comprises almost 2,150 founders. We grouped founders into 10-year age ranges and calculated the average funding they received for each range.  There were almost 700 founders in the 30-39 year-old age range, making it the largest category. Meanwhile, there were only two founders under the age of 20 and just three founders older than 80. 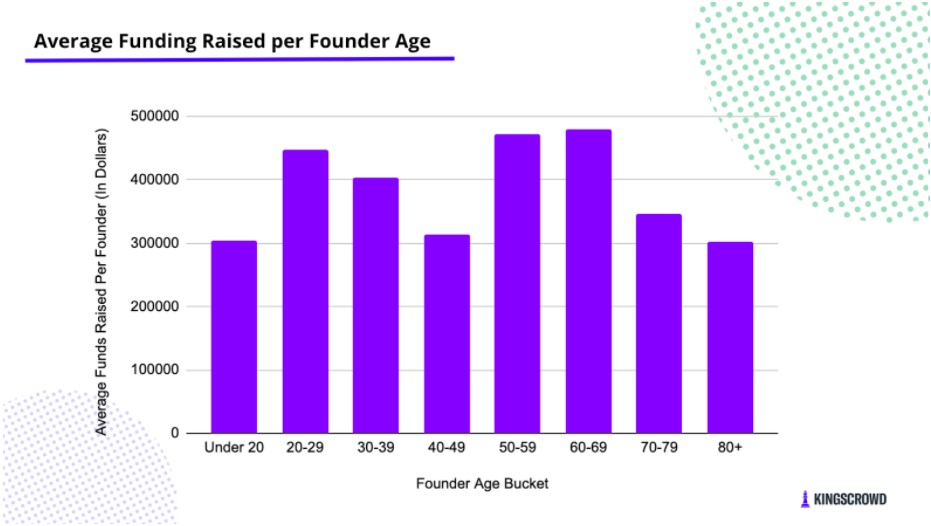 Although there are more founders aged between 30-to-39 years-old, they are not the highest performing. Instead, founders in their 50s and 60s are raising the most money from online investors. On average, these two ranges raised around $472,00 and $480,000 respectively.  Founders in their 20s raised $447,000 on average.

Despite the common story of rockstar 20-something founders, it appears that many investors actually prefer older founders. Younger founders may be seen as lacking experience in their industries and in business execution. Founders in their 50s and above have had extensive work careers already, giving investors more evidence with which to judge their abilities. Additionally, the stage of the startup may be affecting these figures as well. Founders in their 20s are more likely to be running early stage startups that are raising their pre-seed or seed rounds. Those early rounds may have smaller funding goals or just receive less funding in general. By the time companies reach the growth and later stage rounds, several years have passed, and the founders have aged accordingly.

There is a perception that the most successful… ...

The Future of Bitcoin